As the most secular of all the Jewish holidays, Hanukkah is fun not just because it's like a gifting holiday gone wild, but because it's rich in story, latkes, dreidels, and family. Here are some book gift ideas that won't overwhelming them with the classic "What will I play with first?" syndrome.

All of a Kind Family

Some of my absolutely favorite books of all time, the All of a Kind Family series by Sydney Taylor doesn't simply capture a world gone by. It's the entertaining story of a large, warm, old-fashioned Jewish family and their adventures.

The books, centering around five sisters growing up in early 20th century New York City, also serve to educate kids of all faiths about the holidays and lifestyle of Jewish immigrants in East Coast America at the turn of the century, as experienced by the author in her childhood.

Still, the books are not designed to teach so much as to entertain. Each girl in the family has a distinct personality that shines through. I still remember Henny borrowing Ella's dress and staining it with tea...and her creative fix to the problem...

As a set or as an individual book (get the first in the series, All of a Kind Family), these make great Hanukkah gifts for not just girls, but boys, too, who will glom onto the historical and cultural differences of the time "way back when."

Something From Nothing: Hanukkah gift for children age 3-8

This lighthearted story by Phoebe Gilman about a boy who treasures the blanket he was given as a baby is charming and touching. My toddler was given this picture book as a gift, and though he wasn't old enough at the time to understand the story right away, he eventually got them.

I like the lesson to be gained from the book - which presents both a realistic and optimistic view of life. The blanket is recycled into ever-smaller objects to make it last longer. But when it's reached the end of its "lifetime,", the boy comes up - with typical survivor spirit - with a solution that preserves the blanket for all time.

Something From Nothing
As I said, we read this repeatedly when the kid was small. This softcover is great as a small gift for one of the middle days of Hanukkah, after the first days of fanfare and before the last and sweetest.
Buy Now

I have this book and read it to my child as a toddler. Jane Yolen has won multiple prizes and awards for her fiction, and her nighttime reading book is part of a series on "How Do Dinosaurs...". For dinosaur lovers, kids who hate going to bed, or boys and girls who like rhyming verse, this one's truly charming - and not at all a pain for mom and dad to read as a bedtime story.

How Do Dinosaurs Say Goodnight?
Not just the text, but the illustrations in this book are hilarious. Yolen has a way of making simple rhyme seem easy, while sticking in etiquette lessons in inoffensive ways.
Buy Now

For grade school age kids, the Judy Blume "Fudge" books - named after one of the boy characters - make great Hannukah gifts for kids in grade school. Blume writes serious as well as funny books, but these fall distinctly on the "funny" side.

Because Blume remained adamant that, despite her readers' clamoring requests for another sequel, she would only write another Fudge novel when she was truly inspired, readers waited years for her most recent book.  It was worth the wait, in my view (yes, I read them all).  All the books are wonderful. Although girls will like it too, if you're looking for a Hanukkah gift for a boy, this is a great one.

Charlie and the Chocolate Factory

The only thing better than the movie, Willy Wonka and the Chocolate Factory, was the book it was based on. A British writer who fell into writing by accident (ask me sometime about the true story in which C.S. Forester encouraged the British intelligence officer to write), Dahl wrote charming, magical fantasy stories that kids absolutely love. This one's a true classic.

Written in the 19th century, this book endures with a classic plot and delightful characters. Sara Crewe is a young girl sent to a British boarding school while her father is working in an African diamond mine. Treated like a princess when she's rich, her life takes a drastic turn when her father dies and her status falls from wealthy to poverty-stricken in a day. Shoved into the attic room of the boarding school as a grunge, Sara's spirit remains positive, enabling her to trimph against Miss Minchin, the mean and snobbish headmistress. 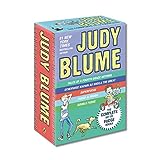 Judy Blume's Fudge Box Set
This boxed set has all the fudge books published to date. As I said above, Blume isn't a prolific writer but what she does write is perfect. She understands kids, and humor, very well. Kids age 7-11 will really get a kick out of these. Actually, I don't think there's an age limit. I read them when I was a kid, and then again as an adult, and they were even better.
Buy Now

The author may earn commissions from items sold through this page. See the author's disclosure statement regarding compensation for this article.