The Best Time to Buy a Beverage Cooler

Those of you that like to spend a lot of time outdoors with your friends and families will want to waste no time investing in a new beverage cooler. Normally, most people wait until just before Memorial Day and the kick off to the summer season to either start their search for coolers or to pull out and dust off their old ones. We all know how important it is to be prepared for all of our outdoor activities. But you may or may not know, the best time to hunt for new beverage coolers is just after the summer season ends when supplies are high and demand is low.

Memorial Day kind of snuck up on me last year and before I knew it, I was in a pinch. You see, I had several beverage coolers but forgot that I had lent them to my sister for a camping trip she was planning, only I didn’t realize it was for THAT weekend. Not the kind of brother that goes back on his word, it gave me an excuse to run out to purchase some new coolers. I soon learned that nearly EVERYONE was doing exactly the same thing and my selection of beverage coolers was limited. I ended up purchasing a couple cheap replacements which I was very unhappy with but desperation won out. Later that evening, I was online and found the perfect selection of beverage coolers and purchased a couple more so I would be prepared for the 4th of July weekend. I later called my sister and told her she could keep the coolers I loaned her. 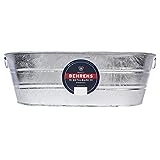 Beverage tubs like the one pictured above can be the perfect backyard beverage coolers. In my rush to find some beverage coolers last year, I came across a small selection of galvanized steel beverage tubs at the local home improvement mega-store. They looked ideal for what I needed them for which was a gathering of about a dozen friends and family members and at least a dozen children. The open tubs were great but it was pretty hot out that weekend and we needed to continually fill them with ice. The great thing about the open tubs was that everyone could see exactly what they were looking for to drink. I paid about $35 a piece for these at the Home Depot and then I seen them online for nearly half that price. So, it does pay to shop ahead of time.

I also keep an eye out for these tubs when I’m searching garage sales, flea markets, auctions, etc. There are tons of uses for these types of tubs other than as ice tubs. Some of my older finds had small pinholes in them which made them inefficient for using as a cooler but they work perfect as a patio planter or starter planter for some other type of vegetation. My dad has a couple tomato plants growing in a few that he found at a local auction and I'm using a couple for some peach trees I want to plant once they're strong enough to go in the ground.

Ice chests are perfect for taking the party with you. It could be to the beach or a park for a summer picnic, or it could be to a tailgate party or parade, or it might just be for a gathering in your own back yard. Ice chest are normally constructed of rugged plastic or hardened rubber making it the perfect pull along beverage cooler. These are what I lent to my sister, both Colemans with wheels for easy toting.

Ice chests are the most common type of beverage cooler but they are great for keeping other things cool as well. I often used mine when I went fishing to keep my catch fresh until I could get it home to clean. I soon learned that I had to designate a certain ice chest for this purpose alone because it gets pretty hard to remove the fishy smell. Nothing can ruin a good cold beverage faster than having it smell like an old fish. 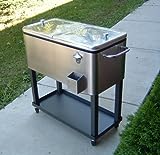 Just about anything can be used to keep your beverages cool when you’re in a pinch. But not everything is as convenient as something that was specifically constructed to be a cooler. Have an old wheel barrel? A little ingenuity can go a long way.

When I went online to Amazon I purchased a stainless steel patio beverage cooler. Yes, it’s a little fancy-schmancy but the price was right and it turned out to be a big conversation piece with my neighbors. The unit I purchased allows for 80qtz, it has a double lid on top to keep the beverages inside ice cold. On the side it has a built in bottle opener and cap catcher which makes opening, and cleaning up, a snap. Mine is also a cart on wheels with a shelf underneath to store the next round of beverages. The best thing I like about the stainless steel beverage cooler is that it adds a bit of elegance to my backyard patio and compliments my stainless steel BBQ grill. Now, when I claim to be a grill master I’m taken more seriously.

Right now I’m in the process of constructing a beverage cooler that is similar to my stainless steel cooler only this one is being constructed with reclaimed wood pallets. I’ve seen a few of these on Pinterest and thought about making one for a very long time so recently I found a local business that was giving away wood pallets. I picked up 10 of them and luckily I had extras because reclaiming the wood is pretty tricky.

I intend on creating a rustic looking cooler chest and adding some details such as a bottle opener and cap catch and possibly some old beer or soda signage. It’s going to be a work in progress since I’m working off of memory and with no design plans. The actual cooler will be one of my old ice chests that has seen better days. That’s the good thing about this project. I can give life back to something that I would have otherwise tossed in the trash heap.

What kind of beverage cooler do you like best?

Buy Your Coolers Now and Not During the Summer

No matter what type or style of beverage cooler you prefer, the best time to acquire them is during the off season and as a matter of fact, the colder the better. When it’s cold, most people aren’t thinking about purchasing an ice cooler so the demand is down and when demand is down then deals are ready to be made.

If you don’t want a brand new cooler then I would suggest keeping a look out at swap meets, thrift stores, garage sales, and even on your local Craigslist. But if you are seeking something new then I would suggest heading over to Amazon. Use the links to the products on this page and check out the reviews made by people that have been purchasing the exact same products.

You really can’t go wrong with a cooler and most of them are purchased out of personal choice. Old or new, they are essential to keeping beverages cool for you and your guests.