Wear Angry Birds costumes this year when dressing up for Halloween. Angry Birdsis the world's most popular iphone app and has been downloaded more than 100 million times, such is it's popularity.

Your Angry Birds costume will be instantly recognisable. Kids of all ages, and adults too, will flock to watch you wearing it.

The Angry Birds game involves a group of colored birds who want to protect their nests of eggs against the Greedy Pigs. As a player in this game aimed at aged 9 and above, it is your job to catapult the birds towards the pigs who are protected behind various forms of destructive materials. Each different color of bird has a speciality that can be used to break through the barrier.

Angry Birds games have really taken off, and now everyone wants to be an Angry Bird.

You can too, with this wonderful adult-sized Angry Birds Costume that you can wear at Halloween or on other suitable occasions.

If the full costume is a bit too much for your requirements, consider buying an Angry Birds Costume/Cosbay Cap Hat.

The Angry Birds Adult Size Cartoon Mascot Costume is a bit pricey, but it is made from top quality materials that are weatherproof as well as being exceptionally light for the user to wear.

Most adult full body costumes have heavy heads that are claustrophobic and which encourage the body to sweat, but the materials in the Angry Birds costume are light, breathable and well-designed. Special care is taken even to protect the eyes from dust and other foreign bodies with special netting carefully hidden from the outside.

The special lightweight polyfoam used the build the body of the head is tougher than more conventional materials in event of knocks. It is not only stronger, it is lighter than the usual paperboard or foam materials used in lesser costumes.

The outside fabric of the Angry Birds costume is made from a wonderfully soft short haired velvet. It is fully lined with polyester taffeta and has been reinforced with a middle layer of polypropylene cotton which makes it feel very soft,comfortable and exceptionally breathable, while at the same time tough enough to resist scores and tears.

Angry Birds costumes can be shipped anywhere in the world for free, including the US, Australia and the UK, and it is advisable to order up to 15 days in advance to ensure delivery in time for when you plan to wear it.

All accessories are included in the price. Those include mascot head, mascot body, shoe covers, hand covers and tail.

This is a superb costume for kids, in a one size fits all pullover. Just slip it on over your ordinary clothes, stuff some pillows into the ready prepared pouch to balloon the costume out a bit, and off you go.

Also available in Red Bird, Yellow Bird and Black Bird, this Angry Birds costume is the #1 must-have this year.

This is the official Angry Birds adult costume. It's foam-lined pouch can be filled out further with your own stuffing to create that perfect look.

Just pull it on over your ordinary clothes and you are ready to go! Instantly recognisable Angry Birds black bird. This outfit will go down a bomb! [Ed:groan] 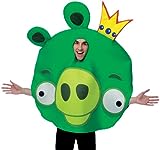 The Paper Magic versions of the Angry Birds costumes are slightly cheaper, and no they are made of polyester, not paper!

Like the official version above, you just slip it on over your clothes and you are ready to roll!

The official yellow Angry Bird costume will be instantly recognizable when you step out wearing this over your clothes.

Just watch out for those slings and stay away from angry pigs.

This is a brilliant costume for the hugely popular Angry Birds game, so order early in case stocks run out.

The Beanie Costume Cosplay Angry Birds Cap Hats come in one size which is recommended to fit from teenager through to adult sizes.

Angry Bird fans will adore those hats which can be worn as part of a costume or on their own.