It’s the long weekend in July, and it’s a long weekend of firework displays across the land whether it’s for Canada Day on July 1 or Independence Day on July 4. Whichever day you are celebrating, many of us like to go out and purchase our own fireworks to light at our leisure.

One warning: please consult your local bylaws before igniting any pyrotechnic devices as some localities do not allow this without licenses and do not allow this in residential areas. Wait, a second warning: do not allow children near the fireworks and, please, do not allow them to light them! A third warning: alcohol, smoking and fireworks do not mix well. Please use common sense and caution near anything explosive and/or flammable!!!

Unless you are a commercial pyrotechnic who is licensed to make these, you will be purchasing these in packages from your local store. There are all types of fireworks, so how does one know what is what? Well, let me shed some light on the subject.

Invented by the Chinese, early fireworks are now known as firecrackers and were lit to help drive away evil spirits. Firecrackers are strung together and come in various sizes. One string can be as short as 10 firecrackers or be as long as 20,000 firecrackers. Firecrackers are packaged in different sized cases and are labeled with three numbers. For example, the label will read: 12/80/16 which, when translated, means: the case contains 12 units of 80 packs of crackers each and each pack contains 16 crackers fused together on one string. You can calculate the total number of firecrackers by multiplying the numbers. Another number that may appear on the packaging provides a number of tau which should not be confused with the total number of firecrackers.

Sparklers are the only type of firework that is meant to be held but I do not recommend this for younger children. Sparklers are tiny hand held fountains that give off coloured sparks from the burning tip. Sparklers are manufactured in two different ways. The first is mounted on a metal wire. These are difficult to light, and more hazardous in the sense that the metal wire heats up and can leave a slight burn on sensitive skin. These types of sparklers are singular in color with silver or gold being the most common. The Morning Glory is the second type of sparkler and it is mounted onto a wooden rod. These sparklers are multi-colored and have three distinct burning phases. The first phase consists of a red flame for approximately 20 seconds, the second phase continues for another 20 seconds with crackles or snaps and finishes with a green/white flame that burns for another 20 seconds.

The common connotation with fireworks is that the displays are only at night. However, this is incorrect. Smoke fireworks are a type of firework that is geared for daytime enjoyment. Smoke balls are fun and when lit, will produce smoke in a variety of colors including orange, yellow, green and blue. Also available are smoke grenades, which are cylindrical in shape and produce thick clouds of smoke for up to 2 minutes.

Snakes do not come out of the package looking like a snake; rather, they come in the form of small black pellets. The name derives from the long carbon ash that resembles a snake on the ground that is left behind as they burn. Strobes, on the other hand, are exactly what they are. They emit a bright and disorienting flash of light in a strobe fashion.

Young children are amused by novelty fireworks because they resemble “real life” objects such as cars, tanks, ships and animals. They are not entertaining to adults as they scoot across the ground when lit. Children love these because they get to play with the toy after the firework has been spent.

Wheels are fireworks that are designed to be attached to a vertical support. It is common to see these at fairs and festivals. When lit, they spin at incredible speeds around their centre, like a wheel, while emitting showers of sparks, whistles and crackles. When lit, they look like a blazing fire floating in mid-air. They are driven by several drivers, or engines, which fire in sequence and propel the wheel.

Similar to wheels, ground spinners spin randomly at ground level while shooting out colourful sparks and flames. “Ground Bloom Flowers” are the most common type and these spin furiously all over the place while the flame changes color several times. The unbalanced spin makes it look like a bright flower as it spins. There is a circular type of ground spinner which is driven by drivers. These types are balanced and spin in a circle.

Flying spinners are ground spinners, but come with wings. As the spinner spins, the slant in the wings direct the air flow downward and lift it into the air, similar to a helicopter or plane. At the end of its flight, a small burst ignites, the helicopter may explode, which results in a shower of colourful stars to rain down on its viewers.

Fountains sit on the ground and emit showers of coloured sparks upwards into the sky for approximately ten feet. They can enhance and complement aerial displays with their vast array of vibrant colors they display.

Some fountains are fused together so that they go off in sequence. These are large fountains, but should not be confused with repeaters. Fountains and repeaters look similar in shape, but are distinctively different when it comes to their fuse. Fountains have a fuse at the top while repeaters have their fuse on the side. Again, these large fountains will never shoot above 10 feet but will complement any aerial show because of their briliant colors and the display lasts for 2 – 3 minutes. 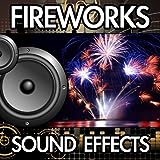 Lifting Off the Ground

A firework mine produces an upward, fan-shaped blast of color and effect. These are not the same as military mines and should not be confused with them. Firework mines are difficult to find but are increasingly becoming a popular item. They are generally sold with the tube and several mines.

Rockets and missiles are fireworks that blast up into the sky and eject an effect, such as a report, crackle or stars. Rockets are stabilized by a long stick and there are two subcategories of rockets. The first is the bottle rocket. These are small, one foot long rockets that can be launched from a bottle. The bottle rockets whistle and explode. The second is the skyrocket. Skyrockets are greater than one foot in length, and are much too big to be launched from a bottle. Because of their size, they contain more impressive effects such as stars, strobes, crackles and parachutes. There are huge skyrockets that are between 3 – 5 feet long, including the stick, and can contain aerial shells, which are explained later.

Parachutes come in two different styles for day and night. Day parachutes have coloured smoke canisters that ignite on the way down and provide a trail of coloured smoke. Night parachutes are similar but instead of smoke, a strobe or coloured star composition is ignited and burns brightly as it slowly falls down. Both night and day can be shot into the air as singles or as multiples. In multiples, several tubes are attached together and as many as 100 different coloured canisters or strobes can be shot into the air and come down for an impressive display.

Roman candles consist of a single tube that can fire many shots, but the shots can only be fired one at a time. The effects include simple coloured stars to complex stars that flash, whistle, explode and crackle. Some large diameter Roman candles contain effects that shoot out and burst like miniature aerial shells.

There are two types of aerial display tubes. The first is the single tube which is pre-loaded with an aerial shell. These generally have exotic effects that are not found in most shells. These effects include green palm trees, purple comets, giant red chrysanthemum bursts or gold comets. The second type is themultiple tube which consists of several tubes fused together that fire a few seconds apart. Each tube contains a single shell.

Aerial shells provide a display much like what we see at professional events. When ignited, the shell is propelled high into the air. It then bursts into beautiful patterns of colours. Reloadable shell kits are one of the most popular consumer firework kits. Each kit can contain one or two tubes and anywhere from 6 to 100 shells. The tube, or mortar, can be made of high density polyethylene (HDPE), heavy cardboard or fiberglass. Types of aerial shells include artillery shells, double break shell, triple break shell, quadruple shell and quintuple shell assortments. The last four types consist of individual shells fused to each other that ignite in rapid succession to provide a sequential effect.

Just as popular as aerial shells, aerial repeaters or cakes, are small firework shows that come in one piece. These are easy to use: just like the fuse, sit back, and enjoy. Aerial cakes are crowd pleasers because of the type and length of show.

Fireworks and the art of pyrotechnics is as fascinating as it is beautiful. Always use caution when handling fireworks and exercise pre-caution with children and spectators before, during and after the display. Don’t forget, pets are also affected by the noise, sounds, brightness and excitement that surround them.

Have a safe and fun time celebrating Canada Day and/or Independence Day this year!