Many people do not need another failure - especially at the beginning of a new year that is supposed to be about hope.

With such an emphasis on Continuous Improvement in business spilling nover into education and life since the 1990s, broken New Year's resolutions seem even more wasteful and needlessly time-consuming.

Why don't we celebrate some winter holidays to make us smile in mid-January - especially where the snow is a foot or two deep and shoveling makes us frown?.

Light Up the Night

Some households have an artificial Christmas tree in their homes all year long, decorated in different colors for each season and/or every holiday they celebrate in the year. This includes hearts for Valentine's Day, Shamrocks for St. Patrick's, Day, flowers for spring, artificial vegetables and fruits for harvest time, etc.

I have seen smaller table top sized trees in December and January, the standard tall tree, and even artificial trees hung upside down from the ceiling. I know that Christmas Trees are controversial for some revelers, harking back to non-Christian traditions, but they are trees and can represent them anything we want them to be. In parts of Europe and Russia, New Year's trees are the favorite decoration, strung with lights and hung with favorite ornaments in late December and January..

Some American families use a favorite house plant and decorate that for the winter holidays or Christmas. They use a Norfolk Island Pine in any size, rubber trees, and several other types of sturdy plants, stringing lights and ornaments on them. Some people keep a few strings of white lights in their gardens or across a fence all year long. 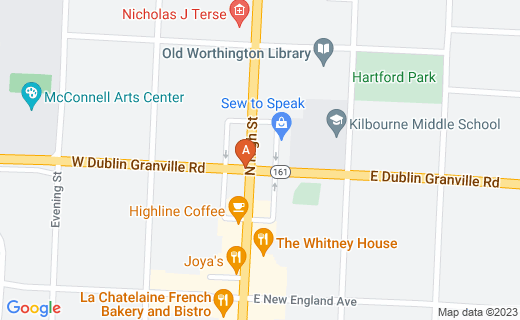 When the Lights Go Out

The sudden and complete absence of lights and decorations on a residential street and along business districts can be devastating.A large shopping center in the north of our city formerly displayed small white lights on the rows of trees lining the entrance street and sidewalks. One of the businesses had furnished the lights and power and when it moved out, so did the lights! The center is not as happy a place anymore.

IN order to prevent all of this is one reason that Downtown Worthington, Ohio uses white lights in the trees on the sideways for several blocks all year.

This is attractive and brings people out to walk together when the late afternoons become dark sooner than the residents like. The lights also bring people to the library for their free concerts on Fridays and to local coffee shops.

Although it sounds odd, actor Kirk Cameron equates the Christmas or New Year's Tree with the wooden lampstands hung with lights in the First Temple described in the Book of Genesis. Regardless, the tree can represent anything we want to remember.

I find that most Americans do not celebrate Twelfth Night, which extends Christmas from December 25th to January 6; although, some celebrate the Orthodox Christmas on that date in January.

In New Orleans, Twelfth Night is the beginning of weekly parties and formal balls held in preparation for Mardi Gras in February. Church services add to the festivities all through these winter months and Thanksgiving through mid-February is a long time celebration. .

If you don't celebrate Twelfth Night and parties leading up to Mardi Gras, then some of the following holidays might be to your liking.

Some traditions including eating pork, making pillowcases, and working part of the day to ensure good luck in keeping your hob for the rest of the year. January 1 is also First Foot Day and a good day for a party.

According to Scottish tradition, the First Footer is a dark haired man and is first to enter your home on New Years Day. He brings presents that can include bread, cheeses, coal, and whiskey for a party. Have a party and arrange a ceremony of some sort for the minute the First Footer enters.

January 3 - Throw Out the Fruitcake Day. This is another good party day. Good fruitcakes exist, but plenty of bad ones give them all a poor reputation. Throw out the cakes at the start of your party - a bonfire would be good, if allowed in your community. Roast marshmallows in the snow. This could become a community event.

This is also the Festival of Sleep Day. You could take a nap or buy a new mattress at the annual mattress and bedding sales. Have a pajama party.

January 4 - National Trivia Day. Have a trivia party and play games that require knowledge of trivia, authors of famous quotations, and other material.

January 8 - National Bubble Bath Day. This might be the perfect day for a hot tub party. A bubble bath exchange gift party would be fin as well. A bubble machine is fun, but bottles of kids' bubbles will do.

January 14 - National Dress up Your Pet Day. It's time for a pet party or parade. On January 17, many churches hold the Blessing of the Animals, but some hold off until springtime for good weather.

January 17 - K.I.D.: Kid Inventors Day. Philo Farnsworth created a design for a television when he was only 14. He patented it in 1927 at age 21. Half a million children and teenagers create useful inventions and games every year. Perhaps your local schools hold an inventors day. If not, suggest one. Encourage the kids to create.

About January 15 - 17, the Hinckley Buzzard Festival occurs in Medina County, Ohio. Turkey vulture (buzzards) return to the state after wintering Down South. I've attended this activity a few times and have found the people very welcoming.

The Internet is full of cats. Icanhas.cheezburger.com is one of the best for captioned photos. Then there's Simon's Cat.

January 23 - Anniversary of the Frisbee by Wham-O! The inventor sold his rights to the toy company, but the empty pie pans of a New England pie company were already used as flying disc toys during WWII and maybe before that. A Frisbee party at the dog park would be good -- If it's snowing, use neon color of Frisbees.

January as a month is National Soup Month and Slow Cooking Month.

January 28 - National Kazoo Day. Invented by an American, played in America, and called the Most Democratic Instrument in the land. Probably mostly made in China, except in Beaufort, South Carolina at the Kazoo Factory and Museum.

An American organization, Kazoo America, has been lobbying for the kazoo to become Americ's national instrument. Would that make its citizens seem less cool, though? Have a kazoo party, incuding a march around the neighborhood with your kazoos.

It seems that the holiday is celebrated on two different dates, depending on the part of the country it's located.

Did you receive a popcorn maker for Christmas, Kwanzaa, or Hannukah? Celebrate twice in January.

If you are careful with the toppings and want to lose weight, you've started with popcorn added to your diet - and no broken weight-loss resolutions in January!