To Celebrate or Not

While visiting an Episcopalian service during the Easter Weekend, I saw that the large bulletin and announcement pages explained the various services by time, date and Rite and explained that the Episcopal is part of the larger Anglican Church. Easter Monday, then, is part of the four-day weekend observance. I remembered that the White House holds an annual Easter Egg roll on the lawn on the Monday after Easter.

The instrumental music at the church visited was particularly beautiful and reminded my of services broadcast from several churches and cathedrals around the UK over radio, television, and Internet media. The particular selections in the local service were of a baroque quality and quite exhilarating. There were ringing bells and bowing as well, and this reminded me of my friends from Thailand. It was quite an interesting service.

This all brought to mind the fact that my father's family over 100 years ago celebrated Easter Monday in the farmlands of Eastern Ohio, Virginia, and nearby. He mentioned the holiday from his childhood a few times, but did not elaborate. We never heard it mentioned in school, although Good Friday and Easter were part of a holiday weekend for some time. Where to look?

I knew that my father's family began somewhere in England, part of them in or near London; some moving to Scotland and another part immigrating to Ireland. A smaller portion of the London area folks immigrated very early to America - some of his great grandmother's ancestors, the Terrells, arriving in the earlier half of the 1700s, while some others landed and moved west to the California coast with all haste. As for religious denomination, many were Protestant and specifically, Presbyterian, suggesting Scottish roots, but that part is unsure. All of these related people picked up their own faith-based affiliations once in America and they all seemed to feud about it -- Presbyterian vs. Methodist, for example, was as heated as today's Republican vs. Democrat. There were also anti-Catholic sentiments spoken. At any rate, the English-rooted part of the family had experienced Easter Monday; so, I looked to England for answers.

These Easter Egg Hunts and Rolls are envied and longed for by adults, that is certain. After our own Saturday late-afternoon service, our pastor reminded everyone where to go next find the Easter Eggs on campus and suddenly announced that adults should remember to pick up their chidlren from the Childrens' Ministries wing before going out there. Many laughed - they would have sneaked out alone if they could, just for one egg.

As it unfolds, the hubbub about Easter Monday centers on the fact that it is a bank holiday in much of UK, but not in Scotland. Aside from that, it is a Holyday as well, celebrated in the early 1900s even by the White House, which held Easter Egg Rolls on Easter Monday. This must have provided some of the first 4-day holiday weekends for the country. I had looked in the New Testament and came up empty regarding any reference to Easter Monday, but I might have missed it, depending on the translations I read.

The Easter Egg roll was not actually a hunt, but in England and some other nations, the rolling of colored hard bolled eggs down grassy hillsides. Originally symbolic of goddess Eoster or Eostre's feast at the spring equinox, eggs represented new life. Certain Christian churches decided that the hard cooked eggs rolling should represent the rolling away of the boulder from the tomb of Jesus on Resurrection Day. Somewhere along the line, the business world and many churches decided that Eoster's associated animal, the spring hare, should become the beribboned Easter Bunny, which might be considered a disservice to both the goddess and Christian traditions.

Actually, you can make symbols mean anything you want these days -- Unless it's trademarked and defined as such, everyone's correct, and different holidays can exist side by side. Many churches on a recent weekend preached the New Testament Gospel and added an Easter Egg Hunt for fun afterward. It's a workable coexistance.

At the White House, the Easter Egg Roll on Easter Monday involves a brood of children with wooden spoons that roll eggs across the lawn with their kitchen tools in a sort of race. Reportedly begun in 1811 on Capitol Hill by First Lady Dolly Madison, this is a celebration unique unto itself. Over the years, different factions of government and the Administration alternately cancelled the event and reinstituted it until in 2009, The Obamas opened it to every sort of family with children.

Eggs by the National Park Service 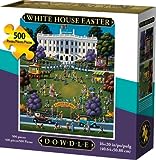 The egg roll for 2013 on April 1 was nearly cancelled because of budget problems in a nation of reduced circumstances under the heavy burdon of a huge national debt. However, on March 29, the Whiote House announced that the show would go on.

It was quite an event, with a stage and musical performances as well as Story Tellers. Just a few of the stars performing were Jordin Sparks (American Idol), Austin Mahone, Coco Jones, Sesame Street (Disney), and The Wanted and they used the Rockin’ Egg Roll Stage.

In addition, dozens of sports professionals, dancers, and renowned chefs set up demos, exercise opportunities, and food samplings for the kids and families. About a hundred costumed characters from kids' TV and movie programs appeared all over the South Lawn.

Timeanddate.com is a calendar association online that gathers facts about holidays globally. They discuss Easter Monday and its celebrations.

In England and other parts of UK, many businesses,schools. and government/civic organizations might close and the day is a bank holiday (banks are closed). This is apparently as it was in Eastern Ohio in the first half of the 20th Century - my relatives spoke of Easter Monday often. Kids rolled or hunted for eggs on the Monday after Easter. It was a four-day weekend holiday altogether.

Some historians have felt that the Monday holiday is taken from Hocktide, a Monday, Tuesday, or Monday and Tuesday celebration (depending on the source) in which women may be kidnapped, tied up, and held ransom for a kiss.

Other traditions hold that women capture men and tie them up for money.

It all sounds like illegal confinement these days, but anyone with experience in this event can feel free to post their information in the Comments below.

A real Hocktide or Tutti Day celebration is linked below, featuring material on the Hungerford, England annual celebration on the Second Tuesday after Easter, but including activities on Friday through Sunday. The Tuesday celebration dinner is a traditional anchovies on toast dish. Many interesting traditions are observed, including colt shoeing, music, ale tasting, and others. Easter Monday is still real in England - a bank holiday at least, but a full week of celebration in Hungerford.