Celebrating Hanukkah: The Festival of Lights

Adam Sandler’s Hanukkah song never fails to put a smile on my face and I’m not even Jewish. I know someone who is—he happens to be my husband. Hanukkah or Chanukah (it’s a matter of spelling) is the Festival of Lights and it is definitely one of my (or rather acquired) favorite Jewish holidays. There is something magical about lighting candles during the winter season—the light against the darkness, the warmth against the cold knocking at the window, the flickering glow casting glances, so indicative of life that sets the mood for the season. Beyond the act of lighting candles is a story that is never too stale to be told. It’s a story of triumph, a story that offers hope for the hopeless, a story of a miracle that goes beyond human reasoning. It’s a story of perseverance, of enduring faith and the triumph of the weak over the strong, good over evil.

The story of Hanukah can be traced back to 165 B.C. The land of Judea (or modern day Israel) was ruled by King Antiochus. He wanted desperately to wipe out the Jewish faith and began a campaign to force the Jewish people to give up their God and faith and worship Greek gods. He desecrated temples and those refused his orders were severely punished.

As in any story worthy of tradition, a heroic figure rises to the occasion. In this case-- Judah Maccabee--he acquired the nickname “hammer” for the way he fought. Together with his four brothers, they formed an army, recruiting any who shared the same conviction. For three years, this motley bunch of die-hards fought relentlessly and finally managed to defeat the mighty Greek/Syrian army. That in itself was quite a feat, considering they had very little resources to work with. Once they defeated the Greek/Syrian army, they set off to rededicate the desecrated Holy Temple in Jerusalem. They cleaned the temple of Greek symbols and idols and proceeded to rededicate the temple by lighting the lamp. For the Jewish people, a light has to be continuously burning in the temple to signify their enduring faith. To their disappointment, they found one tiny vase of olive oil, enough to burn one night.

While a new batch of oil was being prepared under the conditions of ritual purity, the little vase of olive oil miraculously burned for eight nights until a fresh supply of oil was made. By any measure, it was a miracle and the Jews commemorate the occasion by lighting the menorah for eight nights. To this day, it remains one of the more popular Jewish traditions. 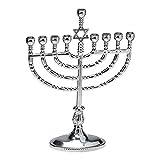 Hanukkah celebration begins on the 25th day of the month of Kislev in the Jewish calendar. It typically falls anytime in November or December and sometimes, it happens within days of Christmas. To celebrate this joyous occasion, Hanukkah menorahs are often displayed prominently near windows, so the lights can be seen and the miracle remembered.

Although olive oil was originally used, it is now replaced by colorful candles.

On the very first night of Hanukkah, one candle is lit and on the second night, two candles are lit and this continues for eight nights, until all eight candles are lit and burning brightly—quite a spectacular sight. The candles have to be lit from right to left.

A Dreidel is a spinning top.

To further reiterate the importance of oil in this celebration, foods fried in oil are eaten. If you love fried food, it is the season to indulge without feeling guilty. Latkes are fried potato pancakes. Eat them with apple-sauce, horseradish or ketchup or plain—they’re so delicious, you can’t just eat one. Sufganiyot or fried jelly doughnuts are eaten too.

“I’ve a little dreidel/I made it out of clay/And when it dried and ready/A dreidel I shall play.”

This popular kid’s song is often sung during this time and rightly so—kids love to spin the dreidel and maybe, win a couple of Hanukkah gelts or even real money. A dreidel has four sides, each inscribed with a Hebrew letter (nun, gimmel, hei and shin) which translates to “A Great Miracle Happened Here.”

Just so the Jewish kids don’t suffer from Christmas envy, they also enjoy getting gifts, one for each night. Now, that’s eight gifts, enough to rival the “twelve days of Christmas.” Of courses, that’s my take. Hanukkah gelts (also known as Hanukkah money) are also given. Getting and giving gifts is always a great way to share love and blessings.

Another Potato Latke recipe from a Jewish fellow.

Other Hubs on use of Oils

How to Use of Aromatherapy to Heal Body, Mind and Soul. 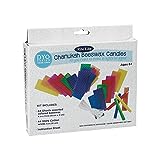