The Tradition of Holly & Ivy at Christmas

Holly In The Snow

Why Decorate With Evergreens?

Christmas is traditionally a time when we bring evergreens into our homes and decorate with them, adding twinkling lights, tinsel and streamers. Along with the Christmas tree and mistletoe, holly and ivy are probably the most popular evergreens that we use.

The tradition of bringing holly and ivy into the house for the Festive Season began in Europe far back in pagan times. The Winter Solstice, which falls on the shortest day of the year, was one of the great pagan festivals, and the days between the Solstice and the 25th December when it appeared that the sun had stopped moving in the sky were regarded as sacred. It was a time when the light had to defeat the darkness of the winter. It was the Vikings who started the tradition of the ‘Yule Log’, which was a large log that was dragged into the house at the time of the Solstice and set alight, and was allowed to burn amid much feasting and the drinking of mead.

Pagan Beliefs About Holly and Ivy

Because both the holly and the ivy are very hardy, it was believed that their ability to survive harsh conditions would somehow help the household to make it through the winter. They were also believed to keep away evil spirits. Moreover, the colours of the holly and ivy, green and red, are the two colours that are most traditionally associated with the Festive Season. The evergreen leaves of these two plants were also supposed to represent the hope that the spring would return, as they stayed green while the rest of the landscape was dead and barren.

Ivy is a plant that was closely associated with the Roman god of wine, Bacchus. He wore a crown of ivy on his head to symbolize his immortality. Bacchus had a very fervent group of followers, who drank copious amounts of wine in their rituals and who wore crowns of ivy as they believed that it would save them from the effects of the wine. The Celts in Ireland believed that ivy symbolised death, determination and spiritual growth. The oak was a sacred tree to the priests of the Celts, the Druids, and they admired the ivy because it had the power to kill a mighty oak tree if it overgrew it and bound on too tightly.

Holly, moreover, was an integral part of the Roman festival of Saturnalia that took place on the 17th December each year. It was a feast dedicated to the god Saturn, who had a staff of holly, and by the end of the pagan Roman era had stretched out to last a whole week. Saturnalia was a time of great revelry, and it was a time when masters and servants temporarily switched roles. The slaves would have a banquet and be waited on by their owners! 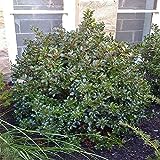 Holly and Ivy in Christian Times

As the years passed, Christian meanings were given to the significance of both the holly and the ivy at Christmas. Holly leaves, because of the fact that they are prickly, have been associated with the crown of thorns that Jesus was made to wear at the time of his crucifixion. And the berries are said to represent the drops of blood that Jesus shed due to the thorns of the crown piercing his scalp. After the English Civil War in the seventeenth century, Oliver Cromwell banned the traditional Yuletide celebrations, which he deemed to be too pagan, so the country people would tie up ‘holy’ boughs of mixed evergreens that in time became the holly boughs that we associate with the season today. In Scandinavian countries, holly is known as the Christ Thorn.

Ivy is a plant that needs to climb and cling to another plant or wall as it grows, so it is said to represent the support that we receive from God and how we can cling to him for shelter in times of need. In Germany it is the tradition that ivy is only used to decorate the outside of a church and that the ivy had properties that could ward off lightning from the building. The way that the ivy grew in a spiralling manner was also regarded by Christians as a sign of Jesus’ resurrection and of his spirit rising up to heaven. Ivy also used to be a popular plant to be used in wedding bouquets, as it was said to represent fidelity and also brought good luck and fertility. Ivy was said to be a fertility symbol because it was a plant that could grow rapidly and reproduce in even the most adverse of conditions. In modern times, ivy is popular as a Christmas plant because it stands for joy and good luck.

In the old tradition, it was believed that Holly was a male plant and that Ivy was a female plant. An old English tradition tells us that whichever plant was brought into the house first foretold whether it was the master or the mistress of the house that would rule over the household in the coming year. There is a popular traditional Christmas carol called ‘The Holly and The Ivy’, which is thought have originated in pagan times and could possibly be over 1000 years old. The modern version was first published by Cecil Sharp, and it is surprising that the carol survived through the modern Christian era, as many customs and traditions were suppressed especially during the Puritan era in the seventeenth century. There also used to be an old custom in some parts of England of the ‘Holly-Boy’ and the ‘Ivy-Girl’, where an effigy known as the ‘Holly-Boy’ was stolen from the young girls in the village and then burned. Likewise an ‘Ivy-Girl’ effigy was stolen by the boys from the girls and set alight.

So when you are decorating your home for this Yuletide season, and you are hanging your boughs of holly or nailing a wreath of holly and ivy to the door, pause for a moment and think of all the wealth of meaning and symbolism that you are invoking. Think of our ancient ancestors, in their struggle to make it through the winter, who brought evergreens into their homes for protection and to conjure up the light and the hope of the spring to come.

The Holly And The Ivy