The Lights at City Hall

The City Hall of Columbus, Ohio on West Broad Street downtown lights up every year at the beginning of December and the spectacle does not cost the taxpayers a single penny. In fact, the outdoor lighing at City Hall is donated all year. A tall decorated Christmas Tree is also displayed to the public on the property, near a city bus stop where riders can enjoy it as they board their buses. Throughout the Christmas and New year's season, groups of carolers and other performers provide entertainment on the steps of City Hall near the tree.

The building and tree display many bright light lights, along with red, green and other seasonal colors and decorations.

100th Anniversary Year for Columbus Recreation and Parks Department Events: Columbus Recreation and Parks operates the city parks and their events along the Scioto River (since 1910). On December 2, 2010 at 5PM, everyone is invited to join the Mayor, Honorable Michael B. Coleman, City Council President Michael Mentel, and City Council Members at our downtown Broad Street Plaza, 90 W. Broad Street, for an annual Tree Lighting Ceremony of a 40-foot tree. This year's lighting ceremony highlights the Spirit of Giving and the Empty Bowls Project for hunger. Lights will be on display until sometime after the Orthodox Christmas celebration day in January, so there is plenty of time to see the lights and holiday displays.

The first night's lighting event, the tree, and the electricity are all free for the 6 weeks involved, provided by AEP Ohio (The Electric Company), Boehringer Ingleheim Roxane, Schooley Caldwell Associates, MSI and Tech Art Productions. Speeches, a visit from Santa, free refreshments (hot chocolate and donuts), and entertainment will follow the 5PM lighting ceremony.

Free refreshments and the goods of street vendors and downtown eateries are available during Santa's visit to City Hall, music from the Columbus Children's Choir, and scenes from The Nutcracker ballet performed in the plaza. People love this event.

This block of Broad Street is next to the historic Palace Theater, with the Ohio Statehouse across High Street half a block to the east. About half a block west is the Scioto River and half a dozen city parks along its banks that come to life with Christmas and Winter Holiday lights and festivities after Thanksgiving and in early December every year. A Santa Maria Ship Museum on a replica ship in the river throws special parties for all the holidays. Look at the link below for all the great events along the Scioto River.

Soup and Ceramics - Spirit of Giving at City Hall

Anyone attending the City Hall Tree Lighting Ceremony may contribute to ending hunger by purchasing a hand crafted bowl containing delicious hot soup. Local children and professional artists have made artistic ceramic bowls for the anti-hunger Empty Bowls Project. For a $10 donation, you can have a piece of handcrafted pottery, hot soup, and freshly made bread. Sponsors are Black Creek Bistro and Katzinger’s Deli, with all donations given to the Mid-Ohio Food Bank in Columbus.

The Columbus Center of Science and Industry (proud to announce that its sister center in Toledo - Toledo COSI, is open again) provides a seasonal light show that is free and very popular with residents and visitors. Located at 333 West Broad Street, the center is less than 2 blocks from City Hall, across a lighted bridge spanning the Scioto.

Light shows will begin around Thanksgiving or early December. Showings ar eusually provided on Wednesday - Saturday from 10AM to 5PM and Sundays 12PM to 6PM. It's clsoed pn Mon./Tues. each week, on December 24 & 25th, and on New Year’s Day. However, New Year's Eve will be particularly enjoyable, because a great light show at COSI is part of Columbus First Night downtown family party. All the installations and attractions downtown will light up for visitors! 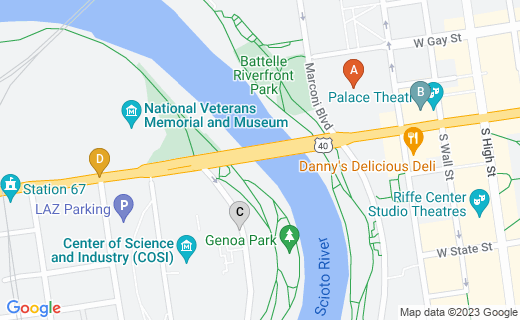 The Parks and Light Shows On the Scioto River