Combine Two Events Into One!

My fellow Americans, the time has come to begin planning Halloween costumes for 2012. It is also time to start planning for the election in November. Let's merge both of these major events together, especially if you are a U.S. citizen suffering through non-stop, annoying election coverage. You may as well make the most of the situation.

This year, there are so many politicians you might want to dress like for Halloween. You can dress like President Obama, or perhaps First Lady Michelle Obama. You might want to dress like our Secretary of State, Hillary Clinton. Hell, people still enjoy seeing someone dressed as former president, Bill Clinton. Perhaps you want to dress like Mitt Romney instead for this election. Even better, maybe you and a friend would like to dress as President Obama and Mitt Romney, and get in random policital debates at the Halloween party. Your friends might think you are weird and kick you out, but hey, you are having fun!

It helps if you naturally look like some of the politicians. If not, that is really no big deal. Often a little makeup and the right outfit will help you out. If all else fails, plenty of companies make political Halloween masks. Perhaps you can even wear one on Halloween AND Election Day. Fun times!

Obviously the first choice for many folks this year for political Halloween masks will be President Barack Obama. Plenty of people think he is super cool and a good looking guy. Not only that, he is the president and you might as well shoot for the stars with your Halloween costume.

If possible, find a female friend that wants to go as First Lady Michelle Obama for Halloween. The two of you can strut your stuff in some nice outfits. If don't look like the two of them, that is OK. There are many President Obama masks to choose from and a nice Michelle Obama wig available to help in this situation. A spiffy suit for President Obama and a sharp looking dress for Michelle is bound to impress everyone at the Halloween party.

If you are leaning more in a Republican direction this election year, have no fear! You can dress just like Mitt Romney for Halloween. Once again, even if you don't look anything like him, there are Mitt Romney masks just waiting for you this Halloween. So put on your best conservative suit and argue with all your Democrat friends at the Halloween party in 2012.

Now, if you have a friend that looks like Monica Lewinsky and she has a blue dress... never mind, never mind. That was just wrong! 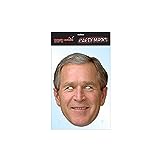 Since Former President Clinton is included in this list, it just seems wrong not to include Former President George W. Bush. The man was full of entertaining sayings (even if they were entertaining for the wrong reasons at times) and, hey, he was in the White House for 8 years. He deserves some recognition and apparently the best we can do for him as a society is give him some weird Halloween masks on Amazon.

This election year, why not enjoy all the glory that is dressing like George W. Bush? You can easily find a list of witty sayings from him and walk all over the Halloween party sharing them with anyone that will listen. A nice suit, tie, and George W. Bush mask will make you the hit of the party this year.

This Halloween, you don't even need to stay within this decade or even this century. You can kick it old school by dressing up like some presidents from back in the day. You dress like George Washington or Abe Lincoln. Everyone seems to enjoy a blast from the way long ago past like that.

You could also opt to dress like a president you rarely ever hear about. When was the last time you heard about Millard Fillmore or Chester A. Arthur? Isn't it time to appreciate our presidents from the past that get so little recognition? Best of all, you can google some presidents from the past, dress like one of them, and then no one will even know if you got it wrong because, chances are, people don't know what they looked like. It is the perfect political Halloween costume!