Hallmark Keepsake Christmas Ornaments - What is New for 2012?

If you visit your local Hallmark card store you will see a wall of Christmas ornaments. Every year Hallmark releases hundreds of Hallmark Keepsake ornaments for your Christmas tree. They range from traditional figures like Santa Claus and angels to Star Trek space ships. Some are also interactive featuring such things as lights and sounds.

When I was a kid my friends and I just loved to go down to the local mall and visit the Hallmark store just to look at all the ornaments. Of course, then we could not afford to buy them but we still loved to drool over them and to dream that one day we could buy them all. Now that I'm an adult I still like to look at the decorations. Now I can actually afford to buy one or two every year.

Why not start a tradition with your children and start a Hallmark Keepsake ornament collection? Many of the ornaments are part of a series in which a new ornament is added each year. Most people have ornaments that have been passed down from family to family. The Keepsake ornaments are of such good quality that they will probably last for year and can be handed down to your grandchildren. The ornaments you collect are also a good indication of where you were at that time and what your interests were. They really are a look into your soul and your personality. 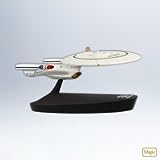 The Enterprise from Star Trek: The Next Generation

Every year Hallmark comes out with a series of Star Trek ornaments and 2012 is no different. There is also a figure of "Bones" available this year. The Enterprise is always a popular item from Hallmark Keepsake ornaments. Press a button on this ornament to hear Captain Picard's opening monologue and the theme music.

The movie National Lampoon's Christmas Vacation starring Chevy Chase has become a Christmas tradition for many families. They have many favorite scenes including the cat chewing on the electrical wire, or the "white trash" branch of the family visiting. This ornament features the voices of Clark and Eddie.

Hallmark releases several Wizard of Oz ornaments every year. This year's selection includes Dorothy, the Tin Man, the Cowardly Lion, Toto and the Wizard himself. It also features audio from the movie.

The Wizard of Oz is a big part of many people's Christmas celebrations, the movie shows up on television at least once during the holiday season. 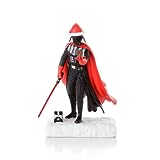 Similar to their Star Trek ornaments, Hallmark also releases several Star Wars ornaments every year. The popular movie series has remained popular since the first release in 1977; it made stars out of actors Harrison Ford, Mark Hamill and Carrie Fisher..

This ornament is sound activated and plays up to 9 alerts from Darth Vader. 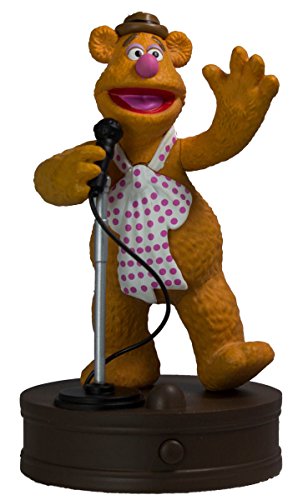 Fozzie Bear considered himself a comedian and he certainly brought the laughs to the Muppet Show. This ornament plays a short comedy routine.

Hallmark has always produced at least one Muppet character ornament every year. 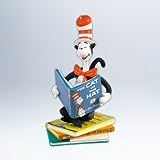 The Cat in the Hat Ornament

The Cat in the Hat is a much loved children's story by Dr. Seuss. I was also made into a movie.

The cat is sitting on a stack of books reading his own story. This would be great for those of your friends who love books or have children. 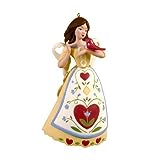 Germany Angels around the World Ornament

I believe that every Christmas tree should have at least one angel ornament, if not sitting on top at least hanging on the branches. This ornament is #2 in a series. It's perfect for the religious person in your life or the person who loves everything Irish. 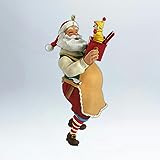 You have to have at least one Santa Claus ornament on your Christmas tree, in my opinion.

There are several Santa Claus ornaments to choose from this year.

This ornament features Santa enjoying one of the toys created by his loyal elves.

Sneak Peek at this Year's Ornaments