Should We Celebrate Halloween?

Why I'm making this page called: "Should we celebrate Halloween ?"

I'm making this page called "Should we celebrate Halloween?" because, like it or not the holiday we call Halloween seems to be here to stay. The only question is "Should we celebrate Halloween or not?" and there seems to be a lot of confusion on the subject today, both in Christian and non-Christian circles. I'll tell you right from the start, I don't plan to clarify the issue, but rather share some varying views on the subject of Halloween celebration and to give you a chance to voice your opinion as to whether or not we should celebrate Halloween. Thus, I'm trusting that you will get involved and share in the duel and poll sections. I'll tell you what I think, but don't let that stop you from sharing your opinion. I could be wrong. In fact I'm not entirely certain in my own mind. Thus, PLEASE DO VOTE AND SHARE YOUR OPINION and let's get this duel going! I meant this to be a duel hub, so don't just read and move on--get into the action!!!

In the meantime, check out the origins of Halloween.

The origins of Halloween celebration

In order to decide whether or not we should celebrate Halloween, it would be helpful to understand something of the origin of the holiday.

As fellow hubber squid-janices7 pointed out in her previously published hub on Halloween history, The celebration which eventually became Halloween "marked the transition from summer to winter, ... also regarded as the Celtic New Year (Nov.1) [. T]he eve of it was called Samhain, [which] eventually evolved into our Halloween. It was also something of a festival of the dead, as Celts believed that spirits roamed the earth on that night." She further explains how the name "Halloween" eventually evolved from the Christianization in the 800's, of the pagan holiday into "All saint's eve" ("All Hallow's eve"). For more on this last check out the first link below:

The history of Halloween:

More on the origin and history of Halloween celebration:

If America is a melting pot, then Halloween is the stew that simmers in our national cauldron. There is a fascinating by Nicholas Rogers, in which he shows how the holiday is a hodgepodge of ancient European pagan traditions, 19th-century Irish and Scottish celebrations, Western Christian interpretations of All Souls' Day and thoroughly modern American consumer ideals. At its heart, says Rogers, Halloween is a celebration of the inversion of social codes-children have power over adults, marauders can make demands of established homeowners and anyone may assume a temporary disguise. This may be related to the Mexican "Day of the dead" at which "death" (personified) is seen to be the great leveler, taking rich and poor alike.

Prayers for the dead on All Hallows' Eve:

"All Hallows' Eve" became an obligatory holy day by the end of the 12th century. Criers dressed in black would "parade the streets, ringing a bell of mournful sound and calling on all good Christians to remember the poor souls.

The custom of 'Souling' or of baking and sharing soul cakes for all christened souls, dates back at least as far as the 15th centuryand was found in parts of England, Belgium, Germany, Austria and Italy. Groups of poor people, often children, would go door-to-door during Allhallowtide, collecting soul cakes, in exchange for praying for the dead, especially the souls of the givers' friends and relatives. Our modern custom of " Trick-or Treat" may have originated from this custom.

Here is a unique twist on the history of Halloween: The little but powerful pamphlet below gives puts a unique spin on the matter. The author strongly suggests that, rather than the Chrisianization of a pagan Holiday, Halloween actually started as a Christian festival and was later confused with a festival of the dead. Thus, he claims that Christians should re-claim the holiday as a sort of Christian Memorial Day . This is one point in favor of celebrating Halloween. Compare it with the predominate view in the discussion tape listed below. 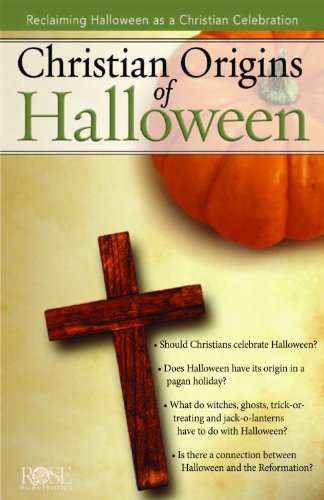 Christian Origins Of Halloween
The author of this little but powerful pamphlet strongly suggests that, rather than the Chrisianization of a pagan Holiday, Halloween actually started as a Christian festival, and thus, Christians should re-claim it.
Buy Now

So should we celebrate Halloween?

This is a sticky question in our day and time and there are various views espoused on the subject from both Christian and non-Christian quarters, the above listed booklet being a prime example. Looking at it from a normal Christian perspective, or perhaps I should better say from a faith based perspective, when we consider the pagan influences in the origin of Halloween, we may very well tend to say no, that we would want to have nothing to do with it. Yet, on the other hand, if we consider the Christian influences in it's origin as noted in the above booklet, and the fact that Halloween has evolved into a seemingly innocent and harmless night of fun for the kids. You may want to check out the discussion in the audio tape listed below and the below listed website, as well as searching Amazon or other sites for other resources before voting and giving your opinion in the poll and duel modules to follow. But please do vote and leave your comments. That's why I made this hub.

I tried to keep this section non-sectarian as well as the previous, but I just couldn't find any Muslim or Jewish books written on Halloween. So I originally listed below two books giving differing viewpoints from a Christian perspective, but in order to meet HP quality standards, I since eliminated both in favor of an audio tape discussion and a website. There is no one definitive Christian view on the subject. It seems there are just as many Christians for celebrating Halloween as ther are against it, and just as many reasons on booth sides as well. If undecided, check out the hubs and website listed below for reasons on both sides of the issue, and/or search the web for more reasons for or against.. Then decide for yourself and vote in my poll below.

Hubs by other hubmasters on the subject:

Before you make up your mind about Halloween celebration, yes or no, you may want to check out what other Hubmasters have to say on the subject:

Other hubs with views on Halloween celebration:

You could try forming a discussion group at your church or other organization to hold an in-depth discussion on the subject. In lieu of that, you can listen to the audio tape, listed below of a Panel Discussion called "A Christian Perspective on Halloween." [As Amazon says:] "Tom Dooley hosts a panel of knowledgeable guests who provide a creative, practical and Biblical discussion on this controversial issue." It includes "A fresh, in-depth look at the origins of Halloween, its pernicious purpose among occult groups, and strong encouragement for churches and families to discover creative, Christian alternatives to this pagan holiday." 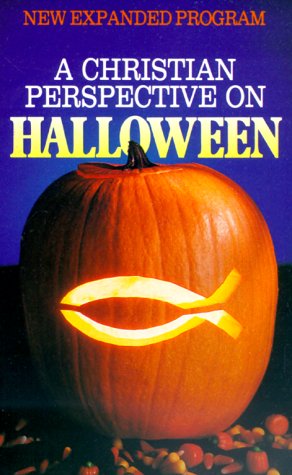 So, what about alternatives?:

You don't have to follow the traditional ways of celebrating, There are many alternatives you could employ, which would be safe and fun for kids, while still honoring God. Try using your imagination, and you're sure to come up with at least a few, but if you're stuck, check the web for suggestions, But,this raises another question: Is employing alternatives really celebrating?

And, Check this out too!

Have you seen the Pumpkin Prayer?

A friend emailed me this and just had to include it on this hub:

"Dear God, As I carve my Pumpkin (cut out top of pumpkin) Take my sin and forgive me for the wrong things I do (clean out inside). Open my eyes so Your love I will see (cut eyes like hearts). I'm sorry for turning up my nose to all You've given me (cut nose like a cross). Open my ears to Your word I will hear (Bible ears). Open my mouth so I can tell others You are near (fish shaped mouth). Let Your light shine in all I say and do! Amen! (Place light or candle inside)"

HOW'S THAT FOR CHRISTIANIZATION?

Now it's Your Turn: Cast your vote for or against Halloween celebration. Then Give your reason under "Yes" or "No" below:- SHOULD we celebrate Halloween?

So should we celebrate Holloween? (However you define "celebrate," should we do somethig, or should we simply ignore the holiday?)

Do you consider the employment of alternatives as a type of celebrating?

Your Turn to Sound Off! Give a Reason for Your Answer! - Tell Why You Think We Should or Should Not Celebrate Halloween..

However you defined "celebrate," (whether or not you think using alternatives involves celebrating), should we celebrate Halloween? Why? OR Why not?

Finally, a bit of Halloween humor: A scary thought: