The History of Poinsettia Plants for Christmas

History of Poinsettia Can Be Traced to Aztecs

Long before Europeans came to the Americas, the Aztecs were growing poinsettias (Euphorbia pulcherrima). They used the flowering plant to make a reddish dye and to counteract fever, and it was also used in midwinter celebrations. Today the poinsettia with its bright red leaves is a common site around the world in most countries that celebrate Christmas. But how did this plant indigenous to southern Mexico and Central America become a worldwide symbol associated with the holidays?

Books About the Legend of the Poinsettia

The Miracle of the First Poinsettia
Buy Now

Legend of the Poinsettia

Mexican legend tells of a young girl who couldn't afford a gift to leave at the manger scene of the local church one Christmas Eve. As she watched others give expensive presents, she was very sad and desperately wished she had something to leave for the Baby Jesus. Then an angel appeared to the girl and told her that even the most humble gift when given with love would be acceptable. The angel told the child to gather weeds and take them back to the manager.

When the girl returned to the church, she lovingly placed the weeds by the manager and suddenly red "blossoms" sprouted and the weeds became beautiful poinsettias. It was a Christmas miracle.

Wikipedia says the legend of the poinsettia dates back to the 16th century. By the 17th century, Franciscan friars were including the plants, known as Flor de Buena Noche  or Christmas Eve flower, in Christmas celebrations. 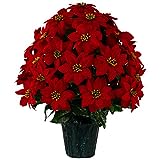 Poinsettias Come to the U.S.

The history of poinsettia starts in the United States in 1825, when Joel Roberts Poinsett, a botanist and the first United States Minister to Mexico, sent some of the plants home to South Carolina and began propagating the plants. A historian later gave Euphorbia pulcherrima their popular name in honor of Poinsett's discovery.

The first commercial poinsettias were developed in 1829, but the plants didn't become common holiday decorations right away. The plant's eventual popularization can be largely credited to the Ecke family of southern California. Albert Ecke and his son Paul started selling and promoting poinsettias in the early 1900s and later heavily promoted the plants by appearing on shows such as Bob Hope's Christmas specials and "The Tonight Show." they also made it a point to send free poinsettias to TV stations during the holidays so the stations could display them on air.

Today the poinsettia has become a well-known part of Christmas celebrations around the world.

- The bright red parts of poinsettias that most people think are flowers are actually modified leaves called bracts.The flowers are the small yellow parts inside the bracts.

- The popular name "poinsettia" was given to the plant by William Prescott, a historian who named the plant in honor of Joel Poinsett.

- In the wild, poinsettias are shrubs that can grow up to ten feet tall.

- Despite common belief, poinsettias are NOT poisonous. (See the sources on Snopes.)

- There are more than 100 cultivated varieties of poinsettia.

What Do You Think About the History of Poinsettias?