Beyond St. Patrick's Day - How the Irish Saved Civilization

Every March, the Internet and newspapers, newsletters, children's handouts, advertisements, comic strips, and new picture books fill up with tales of Ireland and the legends of St. Patrick. His Saint's Day is one of great celebration both in the church and in the streets - at least in America. The holiday comes between Ash Wednesday with its 40 days of sacrifice and Easter or Resurrection Sunday and the permission to enjoy a new life - and a new party with friends. St. Patrick's Day forms a kind of interlude or intermission in the 40 days of sacrifice - a Feast Day, a party day, and yet a Holy Day.

In America, the day is one of the biggest of Christian/secular Holidays, a top priority with Christmas and Easter/Resurrection, though businesses do not close down that day, nor the federal and state offices. In fact, I think more businesses open up that day. St. Patrick's Day is rather like Mardi Gras in that way, but with fewer costumes. One local gentleman in my city dresses full on as St. Patrick and visits the libraries, requesting to check out the Book of Kells.

Columbus OH paints the yellow stripes green on its downtown streets and hosts a parade in the morning, but the suburb of Dublin paints more than that and has an Irish Festival later as well. Unfortunately, there is still gossip about the Irsh - too happy, too drinky, too silly. However no one has ever been shot at the Irish Festival, as has been the case in recent years at the Rib Fest and July 4th Red, White and Boom downtown. So, though they may be too happy, drinky, and silly, the Irish are less bloody on their holiday in my city.

There's more good where that came from...

How the Irish Saved Civilization: The Untold Story of Ireland's Heroic Role from the Fall of Rome to the Rise of Medieval Europe

The first in the Hinges of History nonfiction series, Thomas Cahill's book How The Irish Saved Civilization gathers facts and materials not taught in most Ameriqcan classrooms.

This historian presents them in a logical array that is easy to read, because it engages the reader in only about 240 pages with lively stories of the fascinating lives of historical characters.

The book's illustrations and photo images are quite a nice addition to the text. Understanding the timeline is aided by some background knowledge of Ancient History, but readers without that can easily reference Information Please or Britannica Online for some quick facts.

Controversy burns around the edges of this book. Irish-declaimers maintain that Cahill's material is inaccurate and that the Irish could not save themselves, let alone the read or write - and certainly unable to produce literate and artistic works - surely not scriptural! A dead common notion and dead wrong.

As the Celts migrated westward from Europe to inhabit France, the Iberian Peninsula, and finally Ireland and Scotland, they became popular in gossip as those that strip naked for battle, save sandals and a neck choker, and whipped themselves into a frightening fury before a fight. They were typecast as being only this image.

Some believe the same misinformation today. The bad data has also bee laid on the Scots and most other ethnic group by the "majorities" of the world since Isaac and Ishmael. There must be template form-letter somewhere in which the next complaining group up at bat can fill in the ethnic group of their choice --

Career Political and Science Fiction author Frederick Pohl reminded the public of this problem back in 1967 with his short story The Martians Are Coming. This was during the middle years of Star Trek: The Original Series, in which prejudice against blacks and Russians was a hot topic.

In the Pohl story, Martians are discovered in a war on Mars with Earth, brought here, and slotted by reporters of every media giant into every old ethnic joke around. The joke pointed out as "formerly" about the Irish and now about Martians is the most highlighted and appalling at once. At story's end, an African-American is glad that another race has emerged to take the prejudicial heat.

By Early Irish Monks - The Chi Rho Page of the Book of Kells, before the Nativity in the Gospel of Matthew

Cahill traces Irish History from the early Celts before the Fall of Rome, through the Dark Ages, to the gateway of the European Renaissance. He shows how the Irish helped preserve literacy and classical civilization during The Dark Ages -- They were a lamp in that darkness. The author also shows how Irish Christianity differed from the forced conversions regularly seen under foreign conquest (Roman, the Crusades).

Cahill begins with the etiology of the Roman fall, looking at popular theories. From the Roman viewpoint, he looks at the works of the poet Ausonius and his reflections of sociopolitical conditions before the Fall. He proceeds tgo Augustine of Hippo, writer of Augustine's Confessions. Cahill proceeds to early Celtic epics compared to Roman stories and culture. He adds St. Patrick's own writings and Irish legends of the saint, to illustrate how Patrick spread literacy along with Christianity to the Irish.

During the centuries after St. Patrick's outreach, Irish monks decided that life outside Ireland was a martyrdom they could abide. Cahill includes the stories of several of these interesting monks, who founded monasteries elsewhere and copied the Classics amid the chaos of war.

Tunc Crucixerant from the Book of Kells 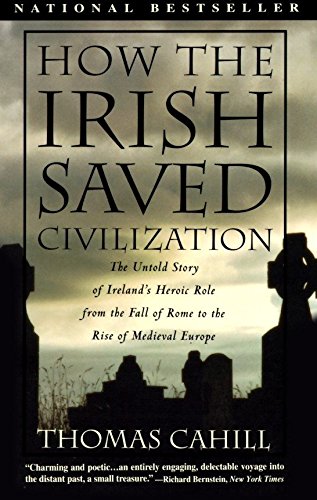 Cahill shows that the Irish were critical in preserving Western Civilization in the Classics at a time in which the Huns and Germanics - Visigoths, Franks, Angles, Saxons, Ostrogothsm, and others - wanted to destroy it.

The primary contribution by Irish monks has been the preservation of Roman and Greek texts during the fall of the Roman Empire. it was the Irish that carefully copied the texts by hand in illuminated manuscript, a lengthy and worthy process, and added annotations in the margins. Each monk added what he knew from his own education, whether it referenced languages, history, customs, traditions, or whatever else he could add for the edification of new readers. They did not rewrite the classics, but added notes. While other peoples called the Irish barbarians, real barbarians were felling Rome and intruding upon England, Scotland, and Ireland. These monks recorded a lot of history in this way, with their own form of concordances and side-by-side texts that make the most accurate and the most expensive Bibles today.

Not far removed from the pagan beliefs in their Celtic roots, the monks could copy a selection of non-Christian texts without judgment, although they made margin notes for readers to consider. The monks collected manuscripts before these writings could be destroyed, copied them in artistic illuminated manuscript and saved them.

Thomas Cahill is of Irish descent and can read and write.

Mr. Cahill was born in New York City to Irish-American parents and educated by Jesuits, learning Ancient Greek and Latin languages and classic literature. To this he added studies in medieval philosophy, scriptures, and theology at Fordham University. His degrees include a Pontifical Degree in Philosophy, Bachelors' Degrees in classical literature, and a Master of Fine Arts in film and dramatic literature. Mr. Cahill also reads Italian and French, handy for delving into global history. He has been a professor at Queens College, Fordham University and Seton Hall University and has contributed to the Los Angeles Book Review.

Thomas Cahill further studied an additional two years at the Jewish Theological Seminary of America and became knowledgeable in Hebrew and the Hebrew Bible. He was also the North American Education Correspondent for the Times of London. He also served as Director of Religious Publishing at Doubleday Books.

How The Irish Saved Civilization appeared for over a year on the New York Times Bestseller List, and has been translated into at least a dozen languages besides English, creating lively discussions around the world. 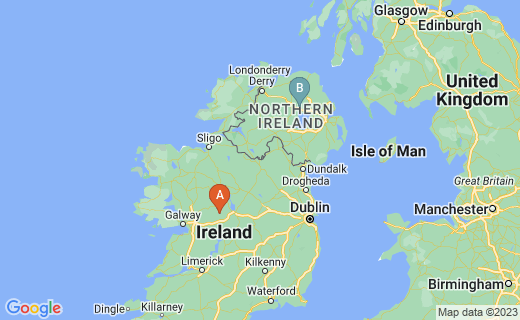