Tawnya is a super fabulous mom of a tiny, spunky teen! She LOVEs Halloween more than Christmas and especially enjoys dressing up.

As the oldest sister of four girls, with the younger three being triplets, I had an instant connection to Frozen. While many Disney classics feature Princesses, Frozen was different. In this unique, soon-to-be classic animated Disney film, there is a princess and a queen. The two women are different physically and emotionally, but one thing is for sure...nothing and I do mean absolutely nothing can break their sisterly bond.

As anyone with sisters will tell you, bonds between sisters are intense and this movie symbolizes the good, bad, and downright ugly emotions that can erupt between two sisters. In addition to an empowering plot that I can truly get behind, the two main characters of the film are absolutely beautiful. With beautiful gowns, hair, and accessories, Queen Elsa and Princess Anna Halloween costumes are sure to be everywhere this year.

To make sure you create the perfect Princess Anna Halloween costume or dress-up costume, I have gone over everything you will need to recreate Anna's coronation look. 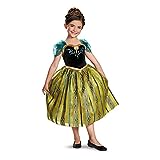 Disney's Frozen Anna Coronation Gown Deluxe Girls Costume
Your little princess will magically feel like Princess Anna at her sister's coronation when she wears this dress up gown. The quality and craftsmanship used to create this gown make it a great choice for Halloween or everyday dress-up.
Buy Now

When most people think of Princess Anna's footwear, they imagine Princess Anna's tall boots that she wears while trekking up the mountain with Kristoff. While these boots are attractive and unique, they aren't the right footwear choice for the Princess Anna coronation gown look. Instead, you need the slippers that Princess Anna wore to the coronation celebration. If you don't want to opt for the designated coronation slippers, any black, simple ballet slipper would do.

Which Princess Anna look do you prefer?

Get a Princess Anna Wig to Complete the Coronation Look

If you don't have red hair, you can still complete Anna's coronation look with a red wig. Unlike the majority of the movie where Anna is wearing braided pigtails, the feisty princess has a much more reserved look for her big sister's big day. Check out the Princess Anna wigs below. If you want to recreate the look with your natural hair, look for the Princess Anna hair tutorial farther down.