US Flag Rules and Etiquette

When you think of the US flag, do you think of it flying in the air or of it being hung on a wall? Regardless of how you envision it, there are proper (and improper) way to display the US flag.

This article will explain the proper ways to display the flag, rules to follow when handling the flag, and give an explanation of when it is appropriate to hang the flag at half-staff.

Although it is always appropriate to display the United States flag, many times people fly the flag only on holidays or days of historical significance. Regardless of when you choose to fly the flag, there are particular ways to display and handle the flag.

You can learn a proper respect for the US flag by following a few of the simple tips in the following article.

Proper Ways to Display the US Flag

If using only one flagpole to display multiple flags, the US flag should be flown on top, followed by the state and city flag, or the POW flag. According to US flag code; a company flag (such as an logo or advertisement) should never be flown on the same pole as the US flag.

When the flag is not flown on a flagpole, it should be hung flatly. Regardless of whether the flag is hung horizontally or perpendicularly, (such as over a street or on the side of a wall), it should be displayed with the blue field of stars on the viewer’s left hand side, or facing North if hanging over a street.

It is against code to print the US flag on something intended to be temporary, such as a napkin or paper plate.

How to Handle the US Flag

Modern flags are all-weather flags, meaning that they are made from materials intended to withstand inclement weather. If your flag is labeled “all weather”, you are allowed to fly it in rain or other inclement weather circumstances.

Flags may be mended (preferably by a professional) or washed to ensure the flag looks nice. Although frayed flags may be flown, frays along the stripes may not exceed more than half the width of the flag.

If your flag is old and tattered, and ready to be retired, you should not necessarily burn it. In fact, since many modern flags are made of nylon you may be in direct violation of stat laws. Instead of disposing of the flag yourself, contact your local VFW (Veterans of Foreign Wars) chapter. The VFW will know the best way to retire the flag in a respectable manner, which may include burning or burial.

Hanging the Flag at Half-Staff

Before placing a staff at half-staff, the flag should be raised to it’s peak, then lowered to half-staff. Other times that the flag may be flown at half-staff include when a current/former President or Vice-President, former/current Chief Justice, or current Speaker of the House has died. Typically the flag is flown at half staff from the date of death until the date of internment. In the case of the President, it would be lowered 30 days from death.

The President of the United States or a state’s governor may also issue a proclamation to lower the flag at half-staff due to national tragedy. For example, after the 2013 shooting at the Washington Navy Yard, President Obama ordered all flags to be lowed to half-staff from Monday, September 16th until Friday September 20th, in honor of all the victims of the tragic incident.

Visit HalfStaff.org to see if the flag should be flown regularly, or at half-staff on any given day 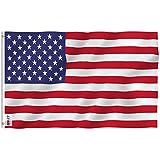