Led Lights in Our Daily Lives

LED stands for light emitting diode. They were first discovered in the early 1900s, but they were pretty much ignored until the 1960s, when they became commercially usable for digital displays for things such as timers and wristwatches. Early LEDs came in one color-red. during 1970s additional color came available, starting with blue and then yellow and green. In the 1980s, advances were made in increased brightness and the light output. Around 1999, holiday decorations such as Christmas lights were starting to be seen,and by 2006 the Capitol Christmas tree was decorated entirely by LED lightbulbs. This was followed in the following year by the tree in Rockefeller Center which was again done completely in LED lights.

The significance of the LED lights is that they use about 1/10 of the amount of electricity used by incandescent lights to produce the same light output. This means that just by switching all of your lights to LEDs you could save 90% of your electric bill that was used for lighting. The only problem with this being that some of the upper and LEDs cost about $100 a bulb, and though over a 10 year period you would save considerable amount on your electric bill, far more than the cost of the bulb, the initial expense is just a bit much for the average consumer to confront.

LEDs are becoming quite popular however in the area of holiday lighting such as Christmas lights and solar Christmas lights. You can buy a string of LED Christmas lights, or an entire solar Christmas light system for under $20.  Of course you can spend more as well, but nothing even close to $100.00 a bulb. This is much easier for the average consumer to face, and it really helps to reduce the power bill over the holidays. These LED light systems can also be used for other holidays. Just the other day I saw some sets of LED bulbs designed to be used for Halloween decorations and they were quite inexpensive. The bulbs were orange instead of the traditional Christmas colors but the idea was essentially the same.

The bottom line is, you can save about 90% of your lighting bill by using LEDs, and if you want to go that one extra step and go for solar Christmas lights, or Halloween lights and save 100%. Either way it's better for the environment and our depleting energy supplies. 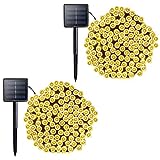