Single Moms: How to celebrate Mother's Day when you are a Single Mother

No mothers have it easy, but single mothers have it hardest of all. They do the job of two parents, face a society that doesn't always make them feel accepted, and many struggle economically for a variety of reasons. Fatigue and depression can result from facing th difficultiies of parenting alone. Single mothers need to make sure they are taking care of themselves so that they can take care of their kids. Mother's Day can be a great reminder for single mothers to practise some self-care, and to acknowledge their tremendous achievement of bringing up a family as a single parent.

Here are some tips for planning a single mom's Mothers Day....

Mother's Day should be a break for mothers everywhere no matter what their circumstances. Don't cook. Call in some help from friends and family if you need it - Mother's Day is a day when you're allowed to ask for some extra support.

Try to connect with others on Mother's Day - don't stay home alone with your kids. Maybe you can spend some time with your own mother, or with siblings or friends. Or maybe there is a local church or charity which is running a community activity for Mother's Day which you can go along to.

Take time to acknowledge what an amazing job you're doing

Facing the task of parenting alone takes real courage and committment - so remember to tell yourself on Mother's Day how amazing you are! For one day at least, take a break from worrying, and write a list of all the challenges you have faced and overcome over the last year. You are doing so much better than you even realise.

People who give large amounts of care to others tend to forget to take care of themselves. As a single parent you are particularly vulnerable to always being ' at the back of the line'. On Mother's Day put yourself first for a change! Doing even small kindnesses for ourselves creates better self-esteem - whether its listening to your favourite music, eating a favourite food or buying something just because it's pretty.

Remember you are in good company

Make Mother's Day a day to celebrate all the amazing single mothers that are out there, and all the happy successful people who were raised in single parent families. There are some great single mother role models who can inspire you to keep going even when times are tough. Check out the list below.

Single Mothers and their children talk about Mothers Day

JK Rowling struggled as a single mother living in Edinburgh Scotland and has openly admitted to suffering clinical depression during that time. It was while she was living alone with her daughter, close to the poverty line, that she wrote the first book in the Harry Potter series. She has since gone on to become one of the bestselling authors of all time and her books have delighted millions of children (and adults!) around the world.

Diane Keaton decided to become a mother at the age of 50, and has two adopted children. She in now also a single grandmother! In 2001 she publically stated that she was finished with romance, "I don't think that because I'm not married it's made my life any less. That old maid myth is garbage".

Teri Hatcher has been a single mother since her divorce in 2003. Added to that she plays a single mother, SusanMayer in Desperate Housewives. The TV star set up a website to support women in 2010 where she offers advice from her own experience.

There are so many famous women who have been single mothers there isn't room to mention them all, but they include Meg Ryan, Liv Tyler, Kate Hudson, Sandra Bullock, Michelle Williams and Madonna. 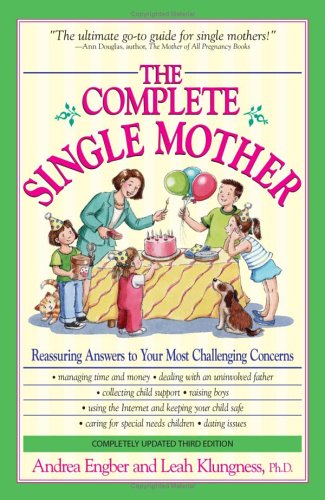 The Complete Single Mother: Reassuring Answers to Your Most Challenging Concerns
Buy Now

Does having a Single mother make a difference to children?