I learned that one of my long-time friends was formerly an Elvis tribute artist that entertained children in hospitals during the Christmas & Winter Holiday Season and for other audiences around the Midwest.

Not only did he do that, but he performed with some of the top professional Elvis tribute artists active today. While listening to tapes of a garage band that produced some of these tribute artists and after hearing CDs of more recent performances, I was speechless.

I find it no wonder that so may people think they have seen Elvis Presley alive in a some US town or on the road -- The performances and the voice quality of the artists I heard were uncanny.

A few years ago, a friend gave me a CD of "Elvis" performing songs written long after August 1977 and the end of the star's career and life. I played the album without comment at work and people enjoyed it. They remarked that they'd never heard Elvis Presley cover those songs before, and as they walked away, they murmured, "Hey, wait a minute...."

The album I played is by Doug Church, a friend of a friend that is a convincing Elvis voice in his own right, but one who entertains only for charity. Mr. Church performs his Elvis Tribute Act around the country professionally and at benefits. In late 2010, he is scheduled for the Kalamazoo New Year's Fest on December 31. Go there and enjoy his 45 minute tribute performance, if you can. You will be impressed.

Elvis Lives: The Business of Being Elvis
Buy Now 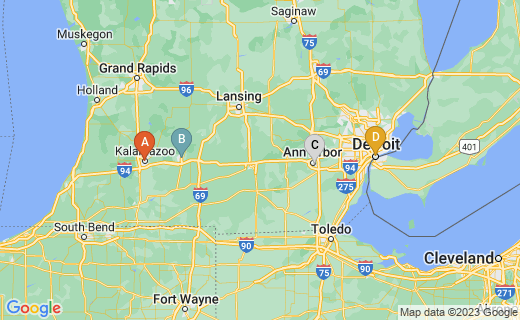 Every year, increasing numbers of US cities throw a community party in their downtown areas for families and singles to attend in safety. It's cut down on traffic accidents on New Year's Eve, saved a lot of lives, and provided enough entertainment and activities to make a better New Year's Eve experience for everyone that attends. These parties are often called First Night celebrations, but in Kalamazoo, it is known as the New Year's Fest, with a lot of fun.

The celebration is all about Performing Arts. The festival hosts Doug Church, whom I recommend 100%, and a number of other musical acts. You can also see original magic acts, comedy shows, exhibitions of all sorts, and fireworks at midnight. Good food is also a part of the evening from 5:30 PM to 12:00 AM.

The price of admission to the festival is only $5.00 around town at merchants' sites for an entrance badge to wear on your coat lapel, and children ages 3 and younger are free. That's a lot of entertainment for less than the cost of a movie matinee (which are becoming scarce). At Bronson Park on the afternoon of the celebration, badges go on sale for $8.00; or you can order them online beforehand.

Too much walking involved? Not at all. Advertised entertainment venues are all within 2 blocks of Bronson Park and near the Kalamazoo Mall, and parking space is ample as well. There are some stairs to climb, but an ADA accessibility map is furnished for alternatives and help in these areas.

A tuba and sousaphone-playing friend's favorite is the Tuba New Year concert by an all low brass band called Tuba New Year at the Kalamazoo festival. Enjoy the videos of them and other recent acts.

You may be wondering about church-related New Year's celebrations and whether you should attend one of them on New Year's Eve instead of the New Year's Fest in Kalamazoo. Increasing numbers of churches are holding these events at the end of the year as well as are the cities around America and Canada. One factor for consideration is that a number of local churches have partnered with other agencies and businesses to host the New Year's Fest.

Christian music acts also perform in some of the venues around the park for this event, so the church is involved is that is important to you on New Year's Eve. Regardless, the festivities are largely family-oriented and fun.

What's also fun for me is that the Kalamazoo Public Library is also involved, holding entertainment in its auditorium. Books, book shops, and libraries are always fun. on New Year's - double fun. 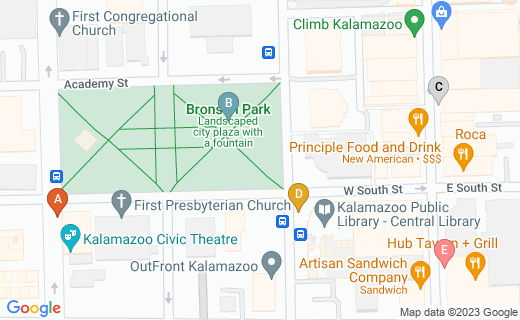 Visitors remark that Bronson Park looks like a New England commons and is th eproduct of the imagination of a New Englander named Bronson long ago. Constructed in the early 1850’s, it is the centerpiece of Downtown Kalamazoo. It contains expanses of greenspace, public monuments, and plenty of shade trees and seating for residents and visitors. A mound in the park may be the work of mound building Native Americans in the city's past. A fountain and reflecting pool add to the attrativeness of the site. As the site of an Araham Lincoln address and many other notable events, Bronson Park is a National Historic Site preserved by the government yet used enjoyed on a daily basis.