Have you ever noticed that adult Halloween costumes or the 'one size fits most" adult costumes seem to be designed for 12 year old flat-chested girls around 4 ft. tall? What do you do if you're over 5 feet tall and weigh a bit more than 100 lbs?

Halloween is a pretty big deal in my neck of the woods. Almost every job I've had included dressing up for Halloween. Each department picks a theme and we have prizes and local children from our Adopt-a-School come by to trick-or-treat. I have a hub devoted to costume ideas you can wear to work. Click here to go to that article.

Even the small town I live in goes all out. Adults dress up as much as the kids to go trick-or-treating.

I've done a little shopping around online and I think you might like some of these if you're looking for an adult costume that might actually fit you.

AnytimeCostumes.com This company has been selling Halloween costumes since 1954. They have a huge selection of costumes of all sizes, accessories, masks, make-up and wigs.

Yandy.com has 251 incredibly sexy plus size costumes, but they are predominantly for women. I saw Zorro and Ghostbusters for men.

These have to be some of the most visually sexually appealing costumes I've seen for plus sizes. I would find it hard to chose just one of these. Some of the styles you can find there are: 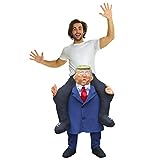 PureCostumes.com has 72 costumes to choose from for plus sizes for men and women.

HalloweenAdventure.com has some selections not seen at the others such as:

MrCostumes.com offers a good selection of men and women's plus size Halloween costumes. Below are a few of the unique ones I found: