I told my son he could pick any theme for his last birthday party. He is obsessed with race cars, especially rally cars and Ken Block, so it was an easy decision for him. This article will give you some ideas of activities you can do to have your own race car themed birthday party whether your child is interested in cars in general, Nascar, or Formula 1. I will highlight the activities we did here, but if you'd like more information about the prep and setup for this activities, please see the specifics in my other article titled Race Car Birthday Prep.

I always like to plan an activity at the beginning of the party that will allow the kids to be doing something while we waited for all the guests to arrive. For the race car birthday party, we set up all of my sons Hot Wheels race car tracks and let the kids play on those. Since they were new toys to most the kids, it was quite a popular activity.

While the group as a whole was playing with the race car tracks, we'd have a couple of the kids come over to be weighed and have their height measured. We also wrote down their names and eye color, and basic things that might be on a driver's license. Luckily, I had my parents to help me with this task, but even if I was on my own, I don't think it would be too difficult.

I already had a template set up on my laptop so all I had to do was enter the information and pictures in and print them out, so the kids could each receive their own driver's license. My parents worked on cutting out them out and putting them in lanyards while we did other activities. If you don't have help, more simple licenses could be made in advance excluding the the weight/height information.

For our second activity, we set up our XBox with our steering wheel controller and a Forza game. These were things we already owned since my son is such a big car racing fan. We chose a short track and then let each child take a turn doing the same track. We wrote their times on a chalkboard and had the kids cheer each other on while they raced. I was worried about this activity because they would each have to take turns, but they seemed excited to watch and cheer their friends on. If I was to do it again though, I might have a second activity going on at the same time and split them into groups.

The next activity was a favorite of the kids, but it was over so fast! I don't even have any pictures of it because it was over so quickly, but the children had a blast. This activity lasted about one minute, and took a bit more prep time than some of the other activities.

Each child could pick a black balloon to pop that had a Hot Wheel car inside for them to keep. They popped the balloons by pinching them, sitting on them, stomping, etc.

We had our party guests use the mystery Hot Wheels/Matchbox cars from the balloons in the last activity for our next activity. I put slightly moistened sand on pans and let the kids drive their cars around on them anyway they liked.

It was warm enough the day of our party that we could do this activity on my deck, but if the weather hadn't cooperated, I would have done it inside on a tarp.

After they practiced driving in sand, we told the children they had completed their driving training and we awarded them their drivers' licenses. My son has a toy car that we let the children take turns driving. I had marked out a course with chalk and driving cones. One child got to be the driver and another a passenger. The rest of the kids got to hold racing flags at the finish line to wave as the car made it home. This was probably the children's most favorite activity we did.

If we hadn't owned the toy car to drive, I would have made a car out of cardboard and various supplies that they could have used instead. That option would also have worked if we needed to do it inside. 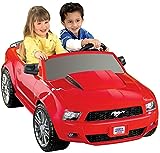 Fisher-Price Power Wheels Ford Mustang
This is the exact car we got for our son. It was a big splurge for us and we had to have several family members go in on it with us to purchase it, but our son was beyond thrilled. It's made for many happy memories. We bought it for him on his third birthday and he is only now starting to get too big for it at age six, but he still squishes himself in to drive it and give neighbor kids rides. One of the best purchases we ever made!
Buy Now

For our last activity, we had a pinata that was styled like my son's favorite race car driver's car. More details on how to do this are in my prep article.

We finished our race car birthday party with cake, ice cream, and opening presents. One thing that was fun for my son was that we got an Edible Image cake with his favorite race car driver on it.

We scheduled the party to be 1 hour and 45 minutes, but it actually wasn't quite enough time. I'd recommend two hours to do all the activities included in this article, more time if you don't have helpers.

This party was super fun for our guests. Even the girls loved it, and I heard from many parents afterward saying that their kids kept talking about how much fun the party way.

If you have other ideas to include in a race car birthday party, I'd love to hear about them in the comments. Be sure to look at the companion article about the prep work involved. Thanks!