I love history and the events that built countries. Some events have details unknown to the average person, and they are interesting.

St. Patrick is recognized as the Patron Saint of Ireland, although Brigid of Kildare and Columba are also formally patron saints. St. Patrick is one of the world’s most popular and best known saints. He was born at Kilpatrick, near Dumbarton, in Scotland, in the years 387 and died at Saul, Downpatrick, Ireland, 17 March 461. His parents were Calpurnius and Conchessa, who were Romans living in Britain in charge of the colonies.

At roughly 14 to16 years of age, he was captured by Irish marauders and sold as a slave to a Chieftan named Milchu in Dalriada, and taken to a territory of the present county of Antrim in Ireland as a slave.

\He tended sheep for six years. At this time Ireland was a land of Druids and pagans. He lived in their culture and learned to speak Celtic tongue perfectly. Although he was from a Christian background, he was not particularly religious before his capture.

Saint Patricks Description of the Days of Slavery

“He relates in his "Confessio" (a brief text written later in life), that during his captivity while tending the flocks he prayed many times in the day: "the love of God, he added, and His fear increased in me more and more, and the faith grew in me, and the spirit was roused, so that, in a single day, I have said as many as a hundred prayers, and in the night nearly the same, so that whilst in the woods and on the mountain, even before the dawn, I was roused to prayer and felt no hurt from it, whether there was snow or ice or rain; nor was there any slothfulness in me, such as I see now, because the spirit was then fervent within me.”

When he was 20 years old he had a dream where God told him to leave Ireland by going to the coast, which meant walking for 200 miles, and there he found some sailors who took him back to Britain where he was reunited with his family.

After his return he stated that he had a second dream where God told him to return to Ireland as a missionary. Soon thereafter, he began religious training that lasted more than 15 years. After his study he received his ordination as a Bishop by St. Germanus, by the Bishop of Auxerre. He was sent to Ireland with a dual mission; to minister to the few Christians already living in Ireland and to begin to convert the Irish.

Shamrock Used to Teach the Trinity

Familiar with the Irish language and culture, Patrick chose to incorporate traditional ritual into his lessons of Christianity instead of attempting to eradicate native Irish beliefs. For instance, he used bonfires to celebrate Easter since the Irish were used to honoring their Gods with fire.

There are many legends about his exploits. One tells of him meeting a chieftain Dichu, from one the tribes that had tried to kill him, but after the meeting Dichu wasn’t able to move his arm until he became friendly with Patrick. This, of course, changed the relationship. Mythology credits him with banishing snakes from the island of Ireland, though others suggest that for climatic reasons Ireland never actually had snakes.

Patrick began preaching the Gospel throughout Ireland, converting many, and he had many disciples who also preached. They converted thousands of Irish, plus began building churches all over the country. Kings, families and entire kingdoms converted to Christianity after hearing Patrick’s message.

He preached for 40 years. He worked many miracles and wrote of his love for God in Confessions. After living in poverty, traveling and enduring much suffering he died March 17, 1461. He died at Saul where he built his first church.

Patrick used the shamrock to explain the Trinity, and it has been associated with him and the Irish ever since. Patrick was a humble, pious, gentle man, whose love, total devotion and trust in God won many souls. 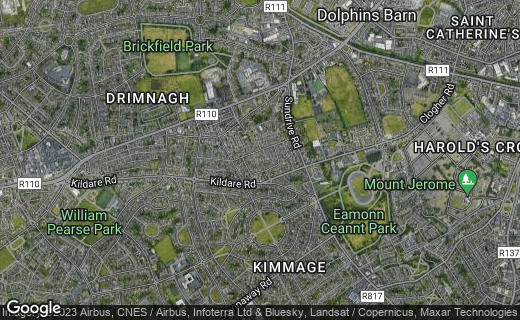 Two authentic letters from Saint Patrick survive, from which come the only universally accepted details of his life. The "Confession" and the "Epistola ad Coroticum" are recognized by all modern critical writers as of unquestionable genuineness. The best edition with a text, translation, and critical notes, is by Rev. Dr. White for the Royal Irish Academy, in 1905. He died in Saul, Downpatrick, Ireland (see the map below).

Saint Patrick, the Patron Saint of Ireland, led a very interesting life. He certainly had a great influence in history with regard to religion.

He is famous also for using the shamrock to explain the trinity. Numerous churches were built and thousands were converted to Christianity thanks to his teaching as he traveled all over Ireland.

The copyright, renewed in 2018, for this article is owned by Pamela Oglesby. Permission to republish this article in print or online must be granted by the author in writing.