Where is Santa's Village?

Did you know that I met Santa at his home in the North Pole? I even met his reindeer. That was when I lived in Fairbanks, Alaska. After my initial meeting that first summer, I would bring out-of-town visitors to meet him as well. He lives in a cozy little cottage style home with Mrs. Claus, and they graciously welcome every guest who come to their door.

His elves are always busy tap-tap-tapping in the workshop, but it isn't until late October that the candy elves start the huge orders for the traditional holiday candy that the world expects each year. And, at the top of the list...well, candy canes, of course! Those curved, red and white striped peppermint sticks that is a mark of the Christmas season. But, do you know the history behind the candy cane? They didn't always look the way they do now...

How to enjoy your candy cane:

The History of Candy Canes

The candy cane is a cane shaped stick of hard candy that is traditionally peppermint flavored. Initially, they were straight, white sticks, but legend has it that a choir director in Cologne, Germany used the candy to bribe his children's choir to stay quiet during the lengthy Christmas service. In order to justify the use of candy during a church service he asked a local candy maker to curve the end and shape them in the form of a cane, explaining to the children that they were symbols of the shepherds that were present in the stable where Christ was born. That was in 1670 and the shape became popular as a decoration for Christmas trees.

From Europe to North America, the tradition of decorating trees with the use of candy canes spread. In 1847, August Imgard, a German immigrant to Ohio, is credited with giving candy canes to relatives and initiating their decorative use on trees.

In the early 1900's candy canes began to have the red stripe added to them. Later, the green striped candy cane appeared with a wintergreen flavor. Today there are hundreds of flavors including tutti fruit, watermelon, blueberry and strawberry. There are also more exotic flavors that can be purchased such as bacon, pickles and gingerbread.

In 1920, Bob McCormack of Albany, Georgia, became a manufacturer of the holiday candy cane. The problem he experienced was that the candy would frequently break before they were packaged. His brother-in-law, a Catholic priest by the name of Gregory Keller, created a machine that prevented this problem and in 1952, the Keller machine changed Bob's sales into a mass production. Bobs Candies, Inc became the largest producers of candy canes world wide until 2005 when the family business was sold to Farley's and Sathers.

When it comes to selecting a box of chocolates, no matter what the occasion, quality should count over quantity or price. A smaller box of well made chocolates from a reputable company is a far better value over all than a cheap box with more candy of lesser quality. Look for ingredients: fresh or artificial, and that would include both nuts or fruit filling. Look for a chocolate that melts in your mouth with a smooth texture, not something that has a gritty sensation.

Chocolate covered cherries is another holiday favorite. You can see shelves lined with various brands. In addition to this the seasonal chocolate orange or strawberry, dinner thin mints and Almond Rocha candies appear. No matter what type of chocolate you may receive, don't wait to eat this sweet treat or it will lose its fresh quality. Chocolates do go stale and it is imperative that they are eaten within a week or two.

Hard Candy: In addition to chocolate candies we know that other candy makers have seasonal wrappings and colors. There are green and red M & M's; there are special Hershey kisses; there are tins of hard candy called ribbon candy and bags of mixed hard candy specializing in cinnamon and peppermint flavored candies.

Then there is my ultimate favorite made by Brach's: a raspberry shaped and flavored hard candy with a soft center that comes through as the outer coating melts. I first tasted this at Christmas time at my paternal grandparents home. Each Christmas we would visit on Christmas Eve for dinner and presents. I can still vividly recall the candy dish that would sit in the front room with these magical candies.

As I grew up I always looked forward to getting this 'once-a-year' treat. Unfortunately, I haven't been able to find any here in the south, although family and friends have sent them to me in Christmas care packages. I don't know the name of this candy, but for some reason the name: Raspberry Stuffie comes to my mind. It may be the correct name, or a childish nickname I gave it. Either way, it is what makes my Christmas candy dreams complete.

How do YOU eat your candy cane?

I'm taking a survey on how readers eat their candy canes:

The National Confectioners Association, (NRC), has some interesting surveys. One of the surveys claim that boys will crunch their candy canes more often than girls. I'm curious as to why that is. I can only imagine that the girls like to savor the flavor and the boys like to eat theirs fast and then go after their sister's candy cane.

Over 1.76 billion candy canes will be produced annually.

There are only a mere 55 calories in an average sized candy cane.

The largest candy cane on record was made by Paul Ghinelli at 58 feet and 2.25 inches long.

How sweets have enticed man through time

Is man naturally born with a sweet tooth? Although each person has their own individual level of preference for sweet treats, it appears that the desire for the taste of something sweet has occurred since prehistoric times. The most ancient sweetener has been honey and it shows up in records from the cavemen through the Egyptians and into the European Medieval Period.

Candy is documented as part of the Egyptian culture 3500 years ago. Cacao, which is the base of chocolate, was used back in the Mayan culture and later discovered by the Spaniards in Mexico in 1519. By the mid 1800's over 380 American factories were producing candy.

Santa Claus and the North Pole 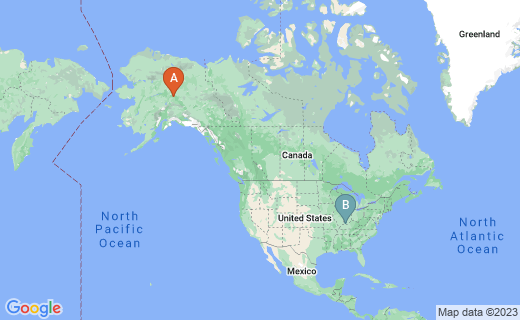 The home of Santa Claus and his family: the wife, the elves and the reindeer.

1.76 billion candy canes is the equivalent of the distance between Indiana and Alaska back and forth 32 times.