Shamrocks and clovers are often considered the same thing (though various different plants with three leaves are known as shamrocks, including those which can be purchased on this page).

The shamrock became a symbol of St. Patrick because of his use of this symbol as a means of illustrating his faith to his disciples and in order to draw more followers to the Catholic Church.

This article will explain the significance of the shamrock to St. Patrick, and is heavily illustrated with beautiful images of shamrocks. You will have the opportunity to purchase your own shamrock plant, but do note that if you're looking for four-leafed clovers, you won't find them here.

Who Was St. Patrick?

St. Patrick was an English saint who was transported to Ireland by pirates during his childhood. His enslavement strengthened his faith and as a result, he found his way out of slavery in Ireland and went on to become the patron saint of Ireland.

Many people (particularly in America) associate St. Patrick with green, drinking beer, and March festivals and parades. But there was so much more to the patron saint of Ireland.

Most important to this article was his faith.

Belleek Shamrock Gift Box
With a five star review on Amazon, these shamrocks would make a great St. Patrick's Day gift or any one of your loved ones. Make sure that you have enough information about growing them, however, as Shamrocks can be finnicky growers.
Buy Now

What is a Shamrock?

A shamrock is a three-leafed foliage plant (depicted throughout this page). It always has three leaves and sometimes the terms "shamrock" and "clover" are used interchangeably. Some people say that the difference is that four-leafed clovers exist but there cannot be a four-leafed shamrock.

As seen above, the shamrock generally has three heart-shaped green leaves and a narrow stem. Some shamrocks sold commercially have triangular leaves and come in a number of other colors, including purple and pink.

Not to be confused with four-leaved clovers, the three-leaved state of a shamrock is important to any discussion of its connection to St. Patrick, and must be understood. Because there are a number of products on Amazon that use the terms interchangeably, this bears repeating as often as necessary.

The Significance of a Shamrock's Three Leaves

The shamrock's three leaves carried a great deal of significance to St. Patrick. Three leaves connected to a single stem formed one plant (or one stem among several of a single plant). It was this design in the shamrock that allowed St. Patrick to use its pattern to illustrate his faith and to help the heathens of Ireland to understand the mystery of the holy trinity.

The Mystery of the Holy Trinity

Christian teaching says that God comes in three parts: The Father, the Son, and the Holy Spirit. The teachings also say that these three are entirely separate from one another and yet they are all the same God. How can this be? This is known as the Mystery of the Holy Trinity.

St. Patrick, who had become a Catholic during his enslavement in Ireland, had set out to teach the heathen Celts about who God was and about the salvation of Christ. One of the most significant teachings in Christianity is the teaching of the Holy Trinity. 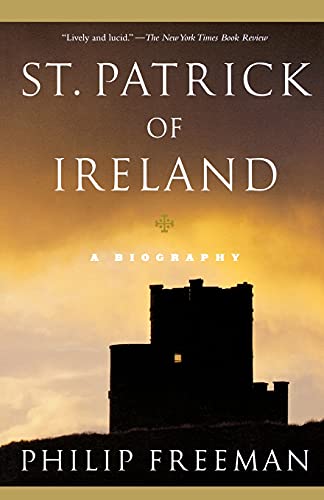 St. Patrick of Ireland: A Biography
From the Amazon Description: "In St. Patrick of Ireland, Philip Freeman brings the historic Patrick and his world vividly to life. Patrick speaks in his own voice in two remarkable letters he wrote about himself and his beliefs, new translations of which are included here and which are still astonishing for their passion and eloquence."
Buy Now

St. Patrick's Explanation of the Holy Trinity -- Using a Shamrock

Living in a very pagan Ireland, St. Patrick was faced with a challenge. The people of this new country of his lacked the foundations that many Christians did in order to teach them to believe in the trinity and other aspects of the Catholic Church and its faith.

St. Patrick had to teach to the Celtic people, whose beliefs varied greatly from what the Christian and Catholic churches taught. The saint hadn't always believed as his ancestors did in England, but his faith carried him through slavery and finally back to England, where he became a priest.

Returning to Ireland to teach to the heathen Celts, St. Patrick had an uphill climb for himself. He was going to have to find a way to teach the lessons of Christianity to a people who lacked the foundational thinking required to introduce these new concepts, many of which were difficult to understand.

After all, they're called "mysteries" for a reason.

St. Patrick used the shamrock to explain the mystery of the holy trinity, as follows.

The shamrock is a singular plant with one stem and three leaves. Each of the three leaves is entirely separate from the others, unique and fully formed in its entirety. But these three leaves are joined to form one plant via the stem.

Just as God the Father, God the Son, and God the Holy Spirit are separate entities from one another (the leaves), yet the same deity (the stem), the shamrock and its leaves are one plant.

Do you celebrate St. Patrick's Day with Shamrocks?

The Green We Associate with St. Patrick's Day is in Part Due to the Shamrock

The Shamrock is part of the reason that we associate the color green with St. Patrick's Day. Although the plant comes in a number of colors, green is the most widely known and traditional, and for that reason when we think about St. Patrick, we think about his green shamrock and his explanation of the trinity to the heathen Celts.