Thanksgiving is Older than America

Thanksgiving originated as celebration for giving thanks to God for a good harvest.

Until recent times, hunger was a very real problem and people were thankful when harvests were good and an adequate food supply was assured for another year.

Eating food is both necessary for life as well as something people can enjoy engaging in. As a result societies have ritualized dining and made it the focus of many social occasions.

Food is often served at at parties. Couples and lovers have romantic dinners. Major events like birthdays, weddings and many holidays usually include a festive meal as a part of the celebration.

Even though food is now plentiful (too plentiful for many as obesity, rather than starvation, is now our main food related problem) we continue to value its social as much as its nutritional features.

Thanksgiving Instructions in the Old Testament

Today Americans, as well as most other people in the world, continue to observe the tradition of giving thanks to our creator by getting together for a festive meal.

This tradition of gathering for a communal meal to give thanks to God for a bountiful harvest goes back thousands of years.

The Old Testament Book of Deuteronomy, in its list of rules for the ancient Israelites to live by in the promised land of Israel, contains instructions for a Thanksgiving type celebration which the Israelites were instructed to observe in the new land:

Therefore, I have now brought you the first fruits of the products of the soil which you, O Lord, have given me. And having set them before the Lord, your God you shall bow down in his presence. Then you and your family, together with the Levite and the aliens who live among you, shall make merry over all these good things which the Lord, your God, has given you. (Deuteronomy 26:10-11)

Just as the ancient Israelites were instructed to give thanks to God and then join with their non-Israelite neighbors (i.e., the aliens who lived among them), the Pilgrims in the Plymouth Colony included their Indian neighbors in their Thanksgiving feast.

A Pilgrim's Account of the First Thanksgiving in Plymouth Colony

Everyone has heard the story of the Pilgrims in the Plymouth colony in Massachusetts celebrating Thanksgiving in the fall of 1621 following a successful harvest.

One of the two surviving contemporary accounts of the fall 1621 celebration is a letter from colonist Edward Winslow to a friend in England, in which he describes the event saying:

...our harvest being gotten in, our Governour sent foure men on fowling, that so we might after a more speciall manner reioyce together, after we had gathered the fruit of our labors; they foure in one day killed as much fowle, as with a little helpe beside, served the Company almost a weeke, at which time amongst other Recreations, we exercised our Armes, many of the Indians coming amongst us, and among the rest their greatest King Massasoyt, with some nintie men, whom for three dayes we entertained and feasted, and they went out and killed fiue Deere, which they brought to the Plantation and bestowed upon our Governour, and upon the Captaine, and others. And although it be not alwayes so plentifull, as it was at this time with vs, yet by the goodneses of God, we are so farre from want, that we often wish you partakers of our plenty.

The tradition of Thanksgiving continued in America during the colonial period. These were periodic community or Colony proclaimed spacial days in which the people as a whole gathered in churches to give thanks which were often followed by people getting together for festivities after church.

During the American Revolution the Continental Congress passed a resolution proclaiming a day of Thanksgiving following the Continental Army's defeat of the British forces at the Battle of Saratoga in 1777.

Resolved, that a joint committee of both Houses be directed to wait upon the President of the United States, to request that he would recommend to the people of the United States a day of public thanksgiving and prayer, to be observed by acknowledging, with grateful hearts, the many signal favors of Almighty God, especially by affording them an opportunity peaceably to establish a Constitution of government for their safety and happiness.

While the First Amendment in the Bill of Rights that Congress had previously sent to the President forbid Congress from passing a law respecting an establishment of religion (i.e., a national church), or prohibiting the free exercise thereof; the members of that first Congress had no problem asking the people to give thanks to Almighty God for the many favors God had given the new nation, especially the opportunity peaceably to establish a Constitution of government for their safety and happiness.

By the President of the United States of America, a Proclamation.

Whereas it is the duty of all Nations to acknowledge the providence of Almighty God, to obey his will, to be grateful for his benefits, and humbly to implore his protection and favor-- and whereas both Houses of Congress have by their joint Committee requested me to recommend to the People of the United States a day of public thanksgiving and prayer to be observed by acknowledging with grateful hearts the many signal favors of Almighty God especially by affording them an opportunity peaceably to establish a form of government for their safety and happiness. 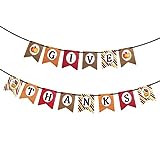 Now therefore I do recommend and assign Thursday the 26th day of November next to be devoted by the People of these States to the service of that great and glorious Being, who is the beneficent Author of all the good that was, that is, or that will be-- That we may then all unite in rendering unto him our sincere and humble thanks--for his kind care and protection of the People of this Country previous to their becoming a Nation--for the signal and manifold mercies, and the favorable interpositions of his Providence which we experienced in the course and conclusion of the late war--for the great degree of tranquility, union, and plenty, which we have since enjoyed--for the peaceable and rational manner, in which we have been enabled to establish constitutions of government for our safety and happiness, and particularly the national One now lately instituted--for the civil and religious liberty with which we are blessed; and the means we have of acquiring and diffusing useful knowledge; and in general for all the great and various favors which he hath been pleased to confer upon us.

and also that we may then unite in most humbly offering our prayers and supplications to the great Lord and Ruler of Nations and beseech him to pardon our national and other transgressions-- to enable us all, whether in public or private stations, to perform our several and relative duties properly and punctually--to render our national government a blessing to all the people, by constantly being a Government of wise, just, and constitutional laws, discreetly and faithfully executed and obeyed--to protect and guide all Sovereigns and Nations (especially such as have shewn kindness unto us) and to bless them with good government, peace, and concord--To promote the knowledge and practice of true religion and virtue, and the encrease of science among them and us--and generally to grant unto all Mankind such a degree of temporal prosperity as he alone knows to be best.

Given under my hand at the City of New York the third day of October in the year of our Lord 1789.

The United States is not the only nation in North America to have Thanksgiving traditions going back to colonial times.

Like the U.S. Thanksgiving, the Canadian celebration of Thanksgiving dates back to its earliest colonial days under both French and English rule.

Locations of the First 3 Thanksgiving Celebrations in North America 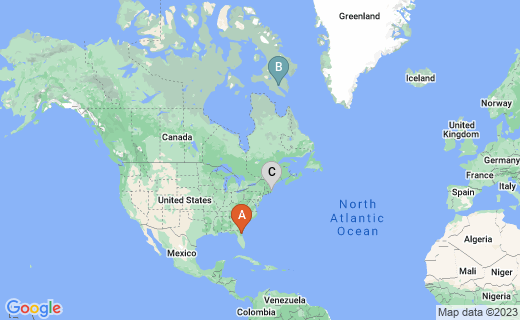 After going ashore, the Reverend Robert Wolfall, the Anglican chaplain who accompanied Frobisher and his crew on the voyage, conducted a service in which all gave thanks to God for a safe voyage thus far. The celebratory service included the distribution of Communion which was the first time an Anglican Communion service was held in North America.

Following the service, the crew celebrated with a meal that appears to have consisted of stale crackers, salt beef and dried peas. Hardly the makings of a holiday feast but that is all they had with them.

While Frobisher's Thanksgiving celebration on Canadian soil took place 43 years before the 1621 celebration by the Pilgrims in Massachusetts, the Spanish Admiral Pedro Menendez de Aviles held a similar celebration in 1565, thirteen years earlier than Frobisher, in what is now St. Augustine, Florida.

Like Frobisher, de Aviles, made his landing after a successful sea voyage in which he transported some 700 men, women and children as well as animals and equipment needed to start a new colony in Florida. Upon landing, de Aviles instructed the accompanying priests to celebrate a Mass in Thanksgiving for a safe voyage. Following the Mass, the new colonists celebrated with a feast to which they invited the local Indians who had greeted them when they landed.

The First Thanksgiving in America

French Settlers in New France Give Thanks for Good Harvests

In the early seventeenth century the French explorer Samuel de Champlain established settlements in the St. Lawrence River valley with colonists from France.

Like the Pilgrims to the south in Massachusetts, these settlers were dependent upon good harvests for survival and, when they had a bountiful harvest would celebrate. Like those before them going back to the ancient Israelites, these celebrations were a combination of worshiping and giving thanks to God followed by singing, dancing and feasting.

In addition to common colonial roots, the U.S. and Canada share the fact that nearly 100,000 Americans were forced to leave the United States and flee to Canada following the American Revolution.

These were the Loyalists or Tories who had not only remained loyal to King George III during the Revolution but provided support to the British cause. In many cases this included fighting with the British against their neighbors.

Being on the losing side during that war resulted in many of them losing their property and being driven out of the newly independent United States. The majority of these exiles fled to Canada where the British government, seeking to increase the population of their sparsely populated colony to the north offered free transportation and free grants of land.

American style Thanksgiving with turkey as the main course meat was one of the customs these new arrivals to Canada brought with them.

Like the United States, Canada continued the tradition of observing Thanksgiving in the Fall. The holiday tended vary from year to year, being observed in different parts of the nation on different days and commemorating different things to be thankful for.

In the United States Presidents after George Washington periodically issued proclamations calling for a day of Thanksgiving and these usually occurred in the Fall. Starting with President Lincoln, the Proclamations started being issued every year with the date being the same fourth Thursday in November which had been the date called for in Washington's first proclamation.

In 1957 the Canadian Parliament changed the law and moved it to the second Monday in October proclaiming the day to be:

a day of General Thanksgiving to Almighty God for the bountiful harvest with which Canada has been blessed...

However, the President still issues a Proclamation calling on the American people to observe the fourth Thursday in November as a national day of Thanksgiving.