My Son's Halloween Acting Debut In A Halloween Haunted Cornfield

Autumn has always been a great time of year. For farmers it is the harvesting season while for city dwellers it is a time to begin returning indoors and refocusing on work or school after a summer in the sun.

Of course the days are still balmy and the evenings cool but usually not too cold yet so the outdoors still beckons.

As September rolls into October and October draws to an end, Halloween provides an excuse for one last big outdoor celebration.

Hayrides, sitting on bales of hay on the back of a horse drawn, or today more likely a tractor drawn, wagon have long been a popular outdoor activity. Going to the country to buy or pick apples or pumpkins to carve into Jack O' Lanterns is another popular Autumn activity.

In recent years haunted house tours have become very popular. You don't even need a house, let alone a haunted one.

Simply outfit a large and darkened tent or building with scary and gruesome characters. Then lead paying customers through on tours.

Many of these haunted experience offerings have become quite elaborate with some going so far as to employ professional actors complete with sophisticated make-up and realistic, and very scary looking, professionally designed props.

With professional sound and lighting effects added into the mix the end result is a real theatrical experience with the audience finding themselves at the center of the action.

And therein lies my story.

Three years ago my younger son, the aspiring actor, auditioned and landed an acting part not in a haunted house in the city, but in a haunted cornfield out in the country some 40 miles from where we live.

It was his first paid acting job - a whole $100 for laying in a hole in a dark cornfield from about 6 p.m. to midnight every Friday and Saturday evening for the month of October.

He could have done better, financially, flipping burgers at McDonald's. But, hey, this is a career field that expects one to pay their dues and work their way up. This was a part of the whole starving artist gig.

Like any worker, he had to get to this remote location in order to perform. So, of course he needed transportation to get to his job.

Not having a license that meant that dear old Dad had to act as chauffeur, which required me to make an eighty mile round trip early in the evening to take him to work and repeat the trip around midnight to pick him up.

Of course I was compensated - like any professional performer, he was entitled to some free passes for special fans. Since this was not a big time operation that he was working for, he was only able to get 2 passes, which my wife and I used to see the show for free - a savings of $10!

Buckelew Farms, the site of the haunted cornfield, is located just west of Three Points, Arizona.

Three Points is just a name used by local people as it is not any type of official political entity. Rather, it is the point where South Sassabe Rd. connects into Ajo Rd. (State Route 86) forming three corners.

A few structures have been built around this intersection which gives one the impression of a hamlet of sorts. A sign says Robles Junction but that is just another name for the area.

Like Why, Arizona which lies further down Route 86 and was named after the "Y" shape the road takes as one branch angles west toward California and the other south to Mexico, the name Three Points is based upon the lay out of the highway at that point. 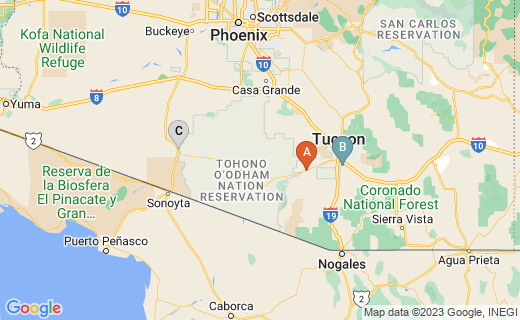 Unlike Why, which is at least an official Post Office designation, Three Points is just the name of a little settlement along the road with Tucson, located about 24 miles due east, as the designated Postal address.

The farm was easy to find on the early evening drive out as it was still daylight. However, at night the desert becomes very dark and the first time I went out after dark I arrived in the area after they had closed to tourists for the night and had shut off the lights at the entrance to the farm.

About ten miles past the farm I saw a sign welcoming me to the Tohono O'daham Indian Reservation and I realized that I had gone too far.

After that I noticed a radio station tower in Three Points whose red light on top could be seen for miles and used that for my navigation check on future trips.

Looking at the map above you will see that there is nothing south of Ajo Road until you hit Mexico. Oh, there are some dirt roads and ranches,

However, it is mostly empty desert which makes it a great place to slip across the border. In fact that section of the border is a major route for smugglers to cross with people, drugs, whatever.

Driving back home after dropping my son off, with the sun having set but the sky still light, I was able to see the Border Patrol vehicles coming out in force and setting up their observation points all along the road from the edge of Tucson and as far west as the road went.

On my return at midnight I could see my headlights reflecting off their cars and vans parked off the road monitoring the traffic on the road and looking for activity in the desert to the south of the road.

Being close to a major urban area, Buckelew Farms is a farm that produces acres of pick-your-own produce with pumpkins being the major harvest attraction in October.

Like Apple Annie's and similar farms near urban areas around the country, they resemble a tiny version of a medieval fair in October with hay rides, refreshments and other little things for the young children.

The afternoon fair atmosphere is for the enjoyment (and dollars) of the parents and their children. It is a great place to spend a Saturday or Sunday afternoon with young children as you and the children pick your pumpkins and enjoy the festivities.

As darkness begins to fall, parents and children head home to carve their newly acquired pumpkins.

The hay wagons are parked and the other family fun activities shut down.

The food booths remain open because now the the teens and young adults begin arriving for the scary nighttime offerings.

According to script my son was given, the tale of the haunted cornfield began back in the 1930s when Tucson was not much more than a town itself and Three Points just a couple of ranches in a nearly empty desert.

However, just because it was empty and undeveloped didn't mean that the vast desert to the west of Tucson was devoid of human activity. While smugglers are the most common criminals using that area today, in the 1930s this empty desert served as a dumping ground for the Chicago mob.

Small though it was, Tucson even then was a winter refuge for people seeking to escape the cold northern winter.

Among those flocking to Tucson there were some, mostly from Chicago, seeking to escape the police and FBI who were often hot on their trail. For these fellas their Tucson retreat was more of a working vacation than a warm place to retire for the winter.

The empty desert around Three Points saw some strange goings on in those days, especially at night.

As night fell a steady stream of trucks could be seen winding their way along the darkened Route 86 to the farm where they dumped their loads of hazardous wastes into the empty desert land creating a foul, toxic mess where the corn field now stands.

In addition to the wastes, a few humans found their way into this dump as well. Some by accident while working with the dangerous wastes and others - well what better place to dispose of a body that you don't want the police to find, than in a toxic waste dump?

Today the waste dump is a corn field. But at Halloween, after the corn has been harvested and only the stalks remain standing, the ghosts of the 1930s converge on the field turning it once again into the mob operated dumping ground of the 1930s.

And, for a fee, visitors from nearby Tucson, the city where in 1934, the bandit John Dillinger was finally captured while attempting to hide from the FBI, can take a guided through the dark corn field as scary creatures rise up from their toxic graves to scare the day lights out of the visitors.

And, three years ago when my son had his first acting gig, as the thrill seeking visitors rounded the third or forth turn in the trail through the cornfield a dim, eerie light suddenly lit up a small clearing containing a half buried barrel of toxic waste out of which, on cue, my son, his face eaten away by the toxins in his grave, would arise and silently greet them.

And thus ends my tale of our encounter with a haunted cornfield.

My son on location in full costume 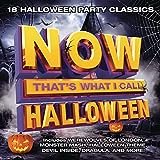 Links to My Other Halloween & Autumn Activities Hubs 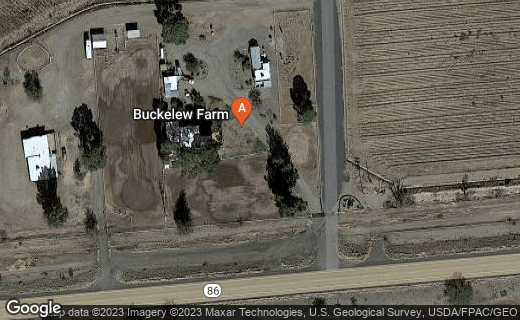