Housewarming Gifts They Can Really Use

For Chris, choosing gifts is like writing a story: By matching the character to the gift, you learn more about people and what they value.

Frankly, as somebody who's recently moved into a new home after living in rentals all my life, I can vouch for the fact that right after a big move, homeowners are nervous and don't want too much useless stuff to add to all the clutter. If you're determined to give a housewarming gift, then give one that's not just attractive, but useful. I've got definite ideas about what fits the bill. Some of my ideas are a bit wacky, but they'll work!

In some cultures, it's a tradition to give salt as a housewarming gift. How about a twist on that? Instead of giving a small quantity of granulated salt as a symbolic token, try giving a very nice chunk of gourmet Himalayan pink salt, which is kosher and can be used for cooking.

Himalayan salt not only tastes great, being unrefined with all its natural minerals, but it also has a beautiful, marble-like appearance and makes a very unusual housewarming gift.

Gifts Should Save, Not Consume, Space

The first thing your gift should do is pay for its own lodging by either being useful, not taking up extra space, or else making the space it takes up bear fruit.

The famous "4th Burner Pot" by Kuhn Rikon does that. It would make a great gift.

I have this unusual pot and my guests always comment on it. The shiny stainless steel with cool-touch handles and a strainer lid are not what make it special; lots of pots have these. 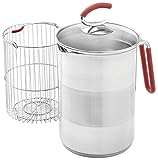 Kuhn Rikon 4th Burner Pot with Glass Lid and Steam basket 12 cup
What's so useful about this tall little pot is that it was designed to fit exactly over that too-small-to-use burner on the stovetop, with a narrow, steep profile and strainer insert that makes it perfect for everything from spaghetti to mashed potatoes to asparagus. Steep pots and bowls are useful in so many ways it's impossible to list them all. I've frequently used this as my deep-fryer, for example, because it minimizes the amount of fat that's needed.
Buy Now

I discovered Polish Pottery in 2014, though it's been marketed in the U.S. for a while now. It has become my downfall. Pottery made in Boleslawiec, Poland is special because it's made according to time-honored traditions with an unusual local clay and meets certain quality standards very little else of its kind does.

It is one of those few houseware product lines that is both beautiful and practical. I cook a lot, so finding dishes that double as cookware and that can be put in the dishwasher without ill effect AND are durable and free of toxins was like a dream come true for me.

Polish pottery is not just dishware. It's strong. It hardly scratches. Besides being dishwasher safe, it can be used to cook in the oven (I've used the bowl below to make cobbler), and then it can be popped in the freezer because it's freezer safe. It's lead- and cadmium-free. As I said, it's dream dishware. And it's fancy but not the kind of fancy you shove in a cabinet and take out once a year. It's for everyday use. There's nothing else like it on the market that I know of.

I bought the bowl below as a gift to myself when we moved into our house, so I know it makes the perfect housewarming gift from direct experience!

In the photo above, you can see the first Polish Pottery bowl I bought. It's a large salad-sized bowl I bought from

Amazon.com. In it are two spoons that I handcrafted out of maple and basswood. (Note the cranberry stain on the maple spoon - yes, my kitchen gets a good workout.)

Book: How to Cheat at Home Repair by Jeff Bredenberg

Books are okay to give at housewarming, but I have a real problem with coffee table books, because I don't actually have a coffee table and so must find an oversized book shelf to fit them on.

What makes this book pull its own weight is that it's atypical for a coffee table book. It's a fully functional how-to book that's topical for the stage of life at which the new homeowner now finds him/herself - and it'll get a laugh when you hand it over as the homeowner will be very conscious of the fact that their work is cut out for them in their new abode.

See the author's disclosure statement regarding compensation for this article.