War on Christmas- Is This War Necessary?

Sage has been a professional writer of 14 years and a Wiccan for 25 years. Her religious ideas and experiences often inspire her writing.

A Casualty In an Unnecessary War

Last night, I got yelled at by a total stranger.

I was grabbing a big pretzel at the mall. As I left the stand, I said, "Thank you. Happy holidays!" to the cashier. I hadn't given it a thought, really-- it just came out naturally. My mind had already moved onto how warm and toasty the pretzel felt when some big guy behind me actually yelled at me. "Leave CHRIST in CHRISTMAS!!!"

He startled me; I instinctively ducked slightly, almost dropping my pretzel and an expletive escaped my lips. I turned around to see what this was about and was surprised to see this guy on a bench glaring and pointing at me.

"It's Merry Christmas! Jesus is the reason for the season!" he shouted. At me. Again.

I have to admit-- he got my Brooklyn up a bit. Not that I mind people saying "Merry Christmas"; I don't. In fact, if I know someone celebrates Christmas, I'll say it myself. But don't tell me what to say, and certainly don't shout at me if I don't even know you.

There was a time when I wouldn't have hesitated to blast right back at him. When I get mad and let loose, I'm something of a verbal scorpion. But my little guy looked scared, and we were in a mall, and I'm not the young, sassy kid with the tough attitude anymore. I just shook my head and kept walking, whispering to my son that we should let the angry man be.

I came home and -- sure enough -- this War on Christmas was on the news over and over. Atheists put a billboard up insulting Christianity. A military base rips down a nativity scene. A public school changes the words to Silent Night. I can't help but wonder why people are making such a ta-do about it on either side.

Why exactly does this have to be a war?

What do you think about the "Christmas Controversies"

Was this really necessary...? 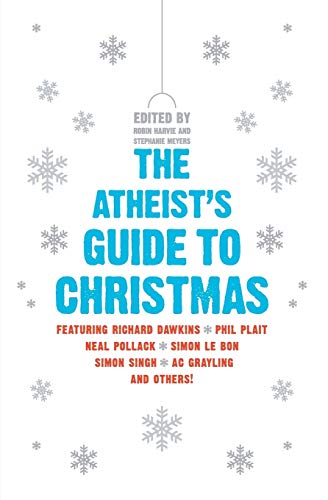 The Atheist's Guide to Christmas
It's supposed to be a fun season; maybe we could all learn about each other's views and lighten up a little and just enjoy it.
Buy Now

Why Pick On Christmas?

I totally sympathize with Christians. It seems that a lot of people interpret our Constitutional right for 'freedom of religion' to mean 'freedom from religion.' I don't think anyone should be forced to participate in religious holiday activities; but I don't think we need to run around hiding every sign of religion.

I see nothing wrong with a Christmas tree in a post office or a nativity scene on a courthouse lawn. What is the big deal? We all know that most people celebrate Christmas and hold these traditions dearly-- if they want to put up some decorations around the town, I don't see why they should be stopped. How holiday displays can be seen as 'offensive' is beyond me. This is not like forcing prayer in school or Creationism in the science class or burning witches in town square. If you can't merely look at a religious symbol without taking offense, maybe you're just a little too touchy. It's a decoration; get over it.

If you feel you must have your own display-- get together with people in your own belief group (or non-belief group, as the case may be), donate one. Surely if the town found a place on public property for a Christian display they can find space for a Winter Solstice display, or a Hanukkah display, and so on. But don't try to rain on someone else's parade.

And if you're going to have your own display-- why not make it a positive message about your own beliefs? Don't put up signs that deliberately poke at other people's beliefs with back-handed, passive-aggressive jabs. You can hardly wonder why some people feel you're waging war on them if your group puts up a billboard essentially saying "(Fill in the blank's) most deeply held and sacred beliefs are sucky and stupid and meaningless." And if you are going to put something like that out there, don't feign shock that people are offended and hurt by it.

Are you offended by 'Merry Christmas'?

Are you offended by 'Happy Holidays'?

Not Everyone Believes in Your Father...

The War On Christmas?

The United States vs. Santa Claus: The Untold Story of the Actual War on Christmas
Sometimes a satire like this can make us see how ridiculous we look.
Buy Now

Accept That The Season Is Not Owned by Christians

On the flip side of this war are some Christians who are outraged. They don't like to acknowledge that there are people with other beliefs and holidays at this time. They don't want public displays of a Pagan Winter Solstice scene, or an atheist display about a secular Christmas. They don't want to see the word 'holiday'.

If you want respect for your faith, you have to give respect to other people's beliefs as well. You just can't own the season. Other people have holidays. The practices of decorating evergreens, gathering with family & friends, feasting, merrymaking and giving gifts has been around since before there was a Christmas. Since before there was a Christ. This is because society changes and holidays are what you make of them-- Christians made many of these traditions their own, but that doesn't mean you have exclusive eternal rights to them.

Society is changing again, becoming more diverse and more secularized. You can't force people who no longer believe in your God to celebrate Jesus' birth at Christmas. For some people, the season is about family gatherings and the spirit of giving and really good eggnog. You can't put up road blocks and refuse to let people of other religions enjoy their own public displays, or sing their songs.

Just as I support your rights to be able to celebrate Christmas in your way, without Grinches and Scrooges trying to rip down public displays and take Christmas carols out of school concerts, I also support other people's rights to keep the holidays as they see fit-- to celebrate something else, or to celebrate Christmas non-religiously if they choose. Maybe if you didn't try to quash them from celebrating their own way, they wouldn't feel the need to make insensitive signs or call for religious decorations to be stripped from all public places.

You can't have it both ways-- either it's something for everyone to celebrate and deserving of the spotlight (therefore you must let people observe it as they wish) or it's strictly a Christian religious holiday (and therefore is a violation of the separation of church and state when pushed into a public arena-- and don't be shocked when it's challenged).

Do you think Christmas can be celebrated in a non-religious way?

Do you think other people have a right to share the spotlight with Christmas in December?

More People Need to Read This:

A Christmas Carol
I read it every December. It is my favorite book. Though not Christian, it does help me appreciate Christmas from the perspective of those who celebrate it; and I think a Christian might be able to see from reading it that Christmas and its traditions can have meaning outside of Christ for those who don't share their belief in him.
Buy Now

The Reason For the Season

Both Sides Fighting Makes Everyone Lose

I really think it is a very sad and vocal minority who is waging war from either side-- you're ruining your own holiday season. And the media outlets (who love to stir up trouble) are dampening everyone's spirits by taking sides and giving all the holiday warriors the spotlight.

The best thing anyone can do is stop being defensive and start spreading the cheer. Don't snap back at people. Don't have an 'I'll show them they can't get away with this' attitude. Allow people to say "Happy Holidays" or "Merry Christmas" at will. Let everyone who wants to contribute to the seasonal décor and festivities do so. Let store owners decide whether they want to use the word "holiday" or "Christmas" on their signs. Let kids in school sing the songs they like at their little pageants-- even if there is religious references (it's just a song after all; not a sermon) and just enjoy the performance.

If we're supposed to be a diverse, tolerant, enlightened society, let's act like it. Instead of worrying about what "they" do, give more thought about what "you" are doing... do you need to rip someone's head off for not giving you greeting of choice? Can't you just take it as it was meant? If your town hall has been putting up the same decorations for 50 years, can you look at them as something that makes a lot of people happy? You can choose not to take it as a personal affront to your own beliefs (or lack thereof) and just let people enjoy the scenery.

What's your preferred greeting this time of year?