Halloween: When and Where Did Halloween Originate and Why Do People Dress up as Ghosts and Ghouls?

With the darkest of my thoughts transferred to written words at times I can see the light.

Do You See Faces in The Night Sky?

The Origins of Halloween!

Imagine you're living in the lands of old. It's the end of a bitter cold day. The sun barely showed her pale face and the muddied earth only tells of the darker months to come. You warm blue finger tips by a growing fire. Black smoke rises to the skies, fed by the bones of slaughtered animals. Their flesh now hanging. Their blood congealing. The food for hungry bellies during the bleakest time of the year. A time when the weak die and the old go to their graves; thankful that their bodies won't suffer the onslaught of another deathly winter.

The day is the 31st of October more than 2000 years ago. You're somewhere among the soils to day we know as the separate lands of Eire (Ireland). The fire is the ritual burning of the carcasses of the dead animals slaughtered for the dawning winter. A pagan Celtic celebration at the end of each summer (summer end) Samhain (today Samhain is the Irish word for November); the end of the harvest. The villagers leave their homes and gather about the communal fire. Stories are shared. Food is eaten and more bones burn to cinder ash. Each villager takes a flame from the grand fire on return to their home, to light their own fire from the celebratory bonfire.

The 31st of October is the end of the old Celtic year. A time when the souls of those that have passed come to warm themselves by the fire and sit once more with their relatives. A time when the spirit world is almost at one with the human world. Souls good and evil can pass through the fine line that exists between the two worlds on the eve of November. This was a time to pray for the souls of lost family to enter heaven. Darker souls looked to possess the bodies of the fine and beautiful. Their eagerness to find warm blood caused the villagers to dress like evil demons, therefore avoiding any harm. They would wear ugly masks and long dark cloaks. They coloured their skin with the blood of the slaughtered animals and the blackened earth. The uglier they looked and the darker they seemed, the safer they would be from the spirit ghouls that hunted the solace of a human form. They wore their costumes to defend their bodies from preying evil spirits. Witches, ghouls, vampires, werewolves, the darkest of the night. It was also believed a flame from the celebratory bonfire would keep the demons at bay. Many families carved out a turnip or beet. Placing the flame inside by their window to warn the evil spirits from their doors.

You pray for your lost loved ones and their souls. As you look into the bleak darkness surrounding the amber flames, your prayers are for your own soul and the body that it keeps. An eerie cry sends shivers down your spine. The fine hairs on the back of your neck stand up. You look behind you and pray to God the ugly demon you see is a human in disguise...

More of The Story

A little later on, the landing of the Romans introduced another harvest celebration. Pomona. The Roman goddess Pomona was the goddess of fruit and orchards. Mainly the apple. Perhaps this gives a little perception to the apple bobbing we eagerly carry out at Halloween. Both festivities where combined in celebration and the tradition carried forth.

The 1840s exposed the Celts of Irish shores to the blight of the potato famine. Thousands died of starvation. The stronger and younger Irish took the seas to the land known as the new world, America. Many died seeking their new lives. Crushed by animals they were forced to travel with; disease and drowning. Perhaps starvation was a merciful end after all.

The surviving Irish brought their tradition of Samhain to the new world. The pumpkin was a plentiful replacement for the turnip to scare of the October demons. With the introduction of Catholicism to Irish lands, Samhain become more about the souls that had passed and the praying of their souls to pass through to the next world, heaven. Hence the name Halloween, meaning 'All Hollows Eve'. The eve of what we now know as 'All Saints Day'. The persistent praying for the souls of the dead to find peace and pass from this world to the next.

It's said that beggars would knock on the doors of houses and beg for food in exchange for praying for the households passed loved ones. It was believed the more prayers said the quicker a soul would pass. If food wasn't given the beggar would tell all other beggars and the house and it's dwellers would be passed over. Sometimes a beggar would steel food or damage property when denied. This is where 'Trick or Treat' comes from. Feed me, treat me or reap the rewards.

Carved Pumpkin Heads: made to scare off The Demons and prowling ghouls...

It seems our tradition of dressing up as scary figures is old school. Today we scare the living. The original disguise was to scare the dead. We light our bonfires and tell ghost stories. No bones to burn and no beggar to play games. Our treat is sweet and our trick a song. No demon to banish or so it may seem. Halloween, in a nutshell is the original Celtic celebration of a people that lived in lands we know to day as Ireland, the United Kingdom and Northern France. The Celts celebrated the harvest, and the end of the summer. They prayed for the souls of loved ones that passed within that year. A time when demons and witches were very much apart of their lives, and feared mostly on the 31st of October.

Modern day Halloween may be all about dressing up and trick or treating. Perhaps we are still carrying on an old tradition, perhaps our dressing up and our bold tricks are still today what they were more than 2000 years ago. Perhaps the only reason the celebration still exsits is more than just fun. These days we don't like to think of demons and ghouls. Take a minute and think: for 2000 years a celebration on the 31st of October has moved across religion, lands and people to take place just like it did all those years ago; ghouls, bonfires, tricks and treats, our burning lanterns in the windows.

If there are demons out there and they still look for a body to possess on October 31st it's as good a reason as any to don a disguise. And remember: the demons look for the fine and beautiful. God help those that dress the sexy guise, sultry vamps, glamours witches and short nurse skirts.

Me! this year I'm going ugly and cloaked. I'm thinking so ugly no demon will even want to buy me a drink, let alone possess my body...

Have some Halloween fun with a scary mask and a scary movie: both highly recommended for cheesy scary fun...

Scary Mask for Halloween: with the new movie IT out this mask is the perfect scare... 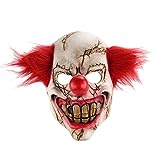 A Great Take on A Classic: turn off the lights and lock the doors...