Why is the poppy used for Remembrance Day and why were there thousands of poppies at the Tower of London?

Poppies are pretty to look at, but they are, in fact, a weed. These plants grow well on rough, disturbed ground throughout western Europe. The vivid red flowers stand out in a field of other greenery and can be seen from quite a distance. Under the petals a pod produces lots of tiny black seeds, often used in baking bread, cakes and muffins. These seeds can stay dormant in the ground for a long time, until the conditions are right for them to germinate and spring to life.

In 1914, fields in Flanders, an area of Northern France and Belgium, became destroyed and churned over by the fighting and war activities that were taking place at the beginning of the First World War. This provided the perfect ground conditions for poppies to flourish. The sight of the blood red flowers had an effect on the soldiers at the time, and they are mentioned in a poem written by Major John McCrae. The Major buried a young officer, Lieutenant Alexis Helmer, in the fields after he was killed by an artillery shell. The chaplain was not available at the time and so a ceremony was conducted in the open air by the Major. McCrae was deeply moved by his experience and penned In Flanders Fields afterwards.

In Flanders fields the poppies blow

That mark our place, and in the sky,

Scarce heard amid the guns below.

We are the dead; short days ago

Loved and were loved, and now we lie

Take up our quarrel with the foe!

To you from failing hands we throw

The torch; be yours to hold it high!

If ye break faith with us who die

We shall not sleep, though poppies grow

The poppy was adopted by the Royal British Legion when it began its Poppy Appeal, which raises money to support the British Armed Forces both present and past.

Poppies are installed by soldiers

The Tower of London Remembers

At The Tower of London, between August 5th until November 11th 2014, there was an art installation using 888,246 hand-made, ceramic poppies - one for each British military life lost in the First World War.

The piece was named Blood Swept Lands and Seas of Red and the artist was Paul Cummins. It was a huge installation and very powerful to see. The sea of poppies spilt from a high window in the walls of the Tower and into the dry moat. Each day more poppies were laid by volunteers, royalty and serving soldiers as it grew. By the end the moat was completely filled with the crimson flowers. The pure volume, and the knowledge of what that represents, was incredibly poignant and it brought a hush to the thousands of visitors who watched in unfold. Both incredibly beautiful and heart-wrenchingly sad.

The installation was created at The Tower of London because many young men signed up at this venue. It also has a history of much bloodshed, including many beheadings over the centuries, and execution by firing squad during WW1.

Each evening, at sunset, 180 names of fallen men from the Commonwealth were read out in a daily role of honour, as well. The public could nominate people to be included in the role of honour.

There was also an exhibition at The Tower which demonstrated the building’s role in the First World War and included soldiers’ diaries, photographs and news reels.

The end date of the installation, the 11th of November, was Remembrance Day in the Commonwealth countries. This day marks the end of World War One in 1918. The day is also referred to as Poppy Day and Armistice Day, and at 11am it is the eleventh hour of the eleventh day of the eleventh month, and at this time a period of silence is observed. 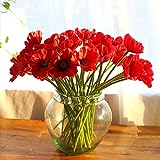 Buy one of the poppies from the installation

You could buy the ceramic poppies from the installation once it was taken down, each made by hand in Paul Cummins studio, for £25 each - 10% of which went charity.

Getting to The Tower of London

The nearest tube station is Tower Hill. As you come out of the exit, the Tower is in front of you, slightly down the hill, and just 2 minutes' walk away. You can walk all around the Tower for free, viewing the grand entrance and Traitor's Gate as you go. There are places to sit awhile, too. The Tower is also alongside the river Thames so you can get off any of the water taxis here too, just footsteps from the entrance.

To visit the inside, there is an entrance fee. There are free tours going on most of the time, just tag along behind to hear all the rich history, interesting quips and gory detail of The Tower of London's 1000 year history. 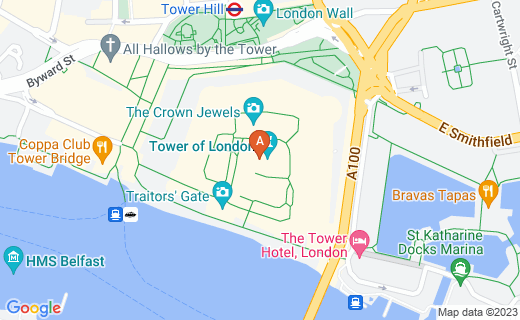