Who are the Addams Family?

Originally dreamed up by cartoonist Charles Addams, Gomez, Morticia and their family were brought to the masses in the 1960s classic television show The Addams Family. A whole new generation connected with the ooky family during the 1990s with the release of The Addams Family and Addams Family Values. Now you too can go as your favorite Addams member for Halloween!

"Well, with God as my witness, I am that fool!"

Gomez Addams is the patriarch of the Addams clan. Married to his beloved bride Morticia, he passionately loves his wife. A dapper dresser, Gomez is usually seen in bold pinstripe suits or velvet smoking jackets. Father to Wednesday and Pugsley, brother to Fester, Gomez adores his family and would even die for them (literally.) Wealthy beyond imagination, Gomez loves to spend money and even lose it. His hobbies include elaborate setups with model trains in the basement of the Addams' mansion and sword practice, particularly fencing.

The role of Gomez was originated in the television series by John Astin and in the feature films by RaÃºl JuliÃ¡.

Gomez is always dressed in a pin-striped or dark-colored suit, sports slicked-back hair and a pencil-thin mustache. Always with a tie or bow tie, he is never without a cigar. His look is polished and gentlemanly, dapper and suave.

By nature Gomez is hopelessly optimistic and enthusiastic, while at times childish and with a rather short attention span. You may want to bring a fencing sword or fake knives as part of your costume, as Gomez is an accomplished swordsman, juggler, and knife-thrower.

If you are lucky to have a Morticia, remember to kiss up her arms and call her 'Cara Mia', as this is Gomez's pet name for 'Tish'. 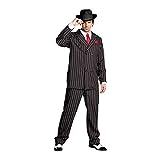 Morticia, the lovely Gothic beauty, is wife of Gomez and mother to Wednesday and Pugsley. With lily white skin and long raven tresses, she favors tight floor-length black dresses that show off her perfect figure. Balancing her hobbies and family are important to Morticia. She loves to garden, keeping rose stems and exotic poisonous plants in the conservatory. Morticia plays the violin and loves to dance with Gomez any chance possible. She also speaks fluent French, which excites her husband.

The role of Morticia was originated in the television series by Carolyn Jones and in the feature films by Anjelica Huston.

Morticia is known for her 'vamp-style', with long black dresses and long black hair. She is not dressed 'trampish' but classy. Her skin is deathly pale, and in the movie she sports blood red lips and nails.

Morticia is self-confident, smart, and sexy. She seems to glide along the floor, and loves to dance. She speaks French fluently and drives Gomez wild.

If you are going with Gomez, remember to tease him with torture, double-entendres, and passionate kisses.

"I'm going to electrocute him."

Wednesday, the eldest child of Morticia and Gomez, is particularly full of woe. As well as deadpan wit and a sense of duty to her family. Her hair is as black as her mothers, severely parted down the middle and plaited into two long braids. She dresses somberly in a black dress with white collars. Wednesday loves to play games with her younger brother Pugsley and as hard as she tries Pugsley always walks away relatively unscathed. She is normally seen carrying around a headless doll.

The role of Wednesday was originated in the television series by Lisa Loring and in the feature films by Christina Ricci.

Wednesday is always dressed in dark little girl dresses, sometimes solid black or with a somber pattern. Always with a white collar. Her hair is dark, parted down the middle and braided into pigtails. She is pale like her mother.

Wednesday is usually somber in nature, with deadpan delivery and loads of dry wit. Never without her headless doll, she loves the macabre.

If you're going with a Pugsley, remember they have a healthy, loving sibling rivalry. You're always trying to knock-off Pugsley during your games so you're an only child again.

Pugsley Addams, the second child, is a chubby good-natured boy who loves to collect traffic signs and hang them on the walls of his bedroom. Normally he is seen in a black and white striped shirt with black shorts, his hair buzzed short. Frequently the 'victim' in Wednesday's games, he never seems worse for wear. Pugsley adores his uncle Fester and looks up to him.

The role of Pugsley was originated in the television series by Ken Weatherwax and in the feature films by Jimmy Workman.

Puglsey is chubby, with dark messy hair or a buzz cut. He is always dressed in a striped tshirt and black shorts.

A happy-go-lucky kid with a penchant for mischief, you might want to take a stuffed octopus with you, as Pugsley owns a pet octopus named Aristotle.

If you're going with a Pugsley, remember they have a healthy, loving sibling rivalry. Remember Wednesday is always trying to talk you into death-related games.

"Haven't you ever slaughtered anyone?"

Fester, Gomez's elder brother, is quite a devilish oddball. Completely bald with dark circles under the eyes, he slightly resembles a skull. Usually dressed in a long black over coat that hangs to his feet, he enjoys sticking a light bulb in his mouth to make it glow. Fester adores his niece Wednesday and nephew Pugsley, and shares a good-natured sibling rivalry with his brother Gomez.

The role of Fester was originated in the television series by Jackie Coogan and in the feature films by Christoper Lloyd.

Fester is a bald, hunched, and barrel-shaped man. His eyes are dark and sunken and he's often wearing a deranged smile on his face. His coat is full-length, heavy, and sometimes made of fur.

His nature is both child-like and mischievous, with a good dose of insanity. Fester sometimes is seen with a light bulb in his mouth, which he can make light up.

If you're lucky to have a Gomez going with you, remember they have a loving but healthy sibling rivalry.

Who is your favorite Addams family member?