Lynne Modranski has been creating devotions for the Advent season for at least 25 years. She loves helping folks get closer to Jesus Christ.

The Christmas Story in the Gospel of John

Very few look to John's gospel to find the story of the birth of Christ. After all, Linus Van Pelt made famous Luke's rendition, and if we want to find the details of the Magi's visit, we look to Matthew's account. But in the first chapter of John, this apostle that Jesus loved tells about Christ's birth in the cryptic way that John often writes.

This page will at the first section of the fourth gospel throughout the four weeks of Advent. Beginning with the first verse of John and going through verse 18, we'll explore this unorthodox Christmas story.

Logos means speech and reason. That Greek word is used over and over in the first chapter of John, and each time it refers to Jesus.

John wrote his gospel through an entirely different lens than the rest of the gospel writers. Most theologians agree that the other three gospels were written relatively soon after Jesus rose, but John wrote much later, at least thirty-five years after Jesus’ death and resurrection, and perhaps as many as sixty years after the Holy event. So, “the disciple whom Jesus loved” sheds new light on the coming of the Messiah, a light that has inspired me, and one that I want to share with you.

I want someone else to discover the truth of the season, to find Christ in the midst of the hustle and bustle. I hope these words that inspire me to keep focused on the One who gives me life will inspire someone else. I pray that they might be words of inspiration to you!

The First Week of Advent

The Candle of Beginnings

The First Sunday of Advent

Today is the first day of Advent, so if you are lighting candles, you will light just one. If the room is even remotely dark, this single candle won’t be very bright, but tonight is just the beginning of Advent. Every week it will get a bit brighter, but today we’re at the beginning.

John tells us that “In the beginning was the Word . . . “ For as long as I can remember, I’ve known that the word “Word” in the first chapter of John comes from the Greek work “Logos.”

As I mentioned in the Introduction, I was inspired by a new Bible that explained the word “Logos” a bit. The information I gleaned was that in the Greek Logos generally referred to the SPOKEN word. And this aha moment immediately brought to mind Genesis 1:1-3: “In the beginning God created . . . And God said . . .”

The Second Week of Advent

The Candle of Light

The Second Sunday of Advent

The Baby that came to reveal God to the world also came to be the light. John tells us that within this Child we can find the light that shines into the darkness.

God knew that humans would have a problem with darkness. In the opening verses of Genesis, we find that the first thing God spoke into existence was light. And according to Sheila Walsh in her book “The Shelter of God’s Promises,” lamp oil was more important to those who lived in the first century than food. People would have gone hungry rather than be without light. She also pointed out that the pillar of cloud that God sent during their wilderness wanderings was also a pillar of fire by night. She called it a huge night light. God understands that in the darkness lurks the unknown, the eerie, the stuff that causes fear; so our Heavenly Father came to us in human form as a baby to illuminate the darkness and dispel the fear.

We don’t know for sure the date that Jesus was born, but as I said in the introduction, the early church chose these cold, dark days of December to be the time we celebrate the Light. As the daylight dwindles to a little more than nine hours (even less if you live north of New York City), we long for the sunny hours of Spring and Summer. Christmas, in the midst of that darkness is meant to remind us that Jesus came to give us, and even BE, the Light.

Plus, our Savior wasn’t born just to dispel the darkness, but overcome it. In First John 1, we are told that in Him there is no darkness. I was recently shown a picture of a burning candle. Behind the candle was a shadow, but only a shadow of the candle itself. Not the light. Jesus is like that.

Even the best things here on earth cast a shadow. No matter how wonderful we try to be, we will always have that little bit of darkness, like a shadow, haunting us. But in Jesus, there is no darkness. Like the light of our candle, the light that is Christ doesn’t even have a shadow.

In Jesus Christ is the light of all mankind. He came to be my light as well as your light. He came to give us hope and dispel fear. He was born to be light in a dark world, and the darkness will never be able to overpower it. 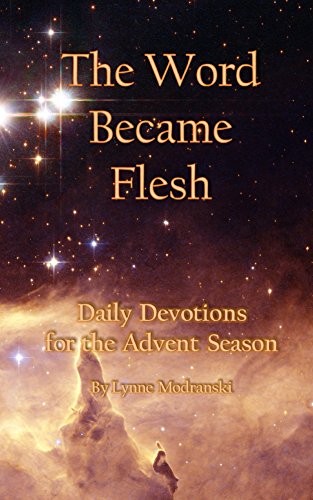 The Word Became Flesh: Daily Devotions for the Advent Season
These 28 Advent devotions are based on the first verses of John, a Christmas story few count. These short daily readings explore the Word, His origins, His Light and His Life. They can help you put Christ back into your Christmas by focusing on Him all during Advent.
Buy Now

The Third Week of Advent

The Candle of Life

The Third Sunday of Advent

In Him was life, and that life was the light of all mankind.
John 1:4

It’s fitting that we celebrate the birth of “life” in the middle of this cold, lifeless season. As the world around us lies dormant, Christ is our reminder that even in the most listless seasons of our existence, there is the hope of life.

The candles we light during this third week of advent brighten the room even more than the two we lit last week. Their flame reminds us that Jesus is the light, but John tells us they should also remind us that Jesus said He is the “resurrection and the life” (John 11:25) as well as “the way, the truth and the life.” (John 14:6) We find true life in Jesus.

Last week we read the end of this verse focusing on the fact that Jesus is the “Light.” He came to shine into the darkest part of our lives and bring joy and peace. But even more than all of the fruit of the Spirit, our Savior came to bring life, to be the life.

As Christians we are blessed to have the “life,” not just at Christmas, but year round. He is shining His blessing on us, and we are aware that it’s His Life that gives us light, hope, in the midst of the darkest, even the most lifeless time of year. He brings life because He IS life.

As we move into these final days before our Christmas celebration, consider where it is you are looking for life. Does your life reflect the light of all mankind? Take a minute today to make sure you are ready to celebrate the birth of the One who gives us the light we need to survive the darkness, the Savior, the baby who IS life.

The Fourth Week of Advent

the Candle of Truth

The Fourth Monday of Advent

Isaiah said it would happen, and last night we read John’s record of the fulfillment of the prophet’s words, “He came to His own, but they wouldn’t accept Him.” (John 1:11) Unfortunately, it’s still happening today.

Around the world people are scurrying about taking care of the last minute preparations for Christmas without even noticing the guest of honor. I’m guessing because you are reading this and perhaps lighting a candle (or four), you’re trying to live above the standards of the world to make sure that you aren’t even accidentally rejecting Christ and His perfect, beautiful gift.

This week, more than any other, we are focused on a tiny baby lying in a manger. We have romanticized the feeding trough (that’s what a manger is) and the dark cave-like stable Mary and Joseph found in the overcrowded Bethlehem. Luke tells us there was no guest room available, no room in the inn. Not one person in that small town could make room for a very pregnant woman and her husband. Yes, the Son of God was rejected even before He was born.

If we want to give Jesus the best present this year, we will make sure to “notice” Him. We’ll watch for Him in the faces of those we go to church with as well as the ones we pass in the mall. We’ll look for Jesus in the worship services we attend, our work places, parties and celebrations. We are Jesus’ own if we’ve accepted Him as our Savior, and we want to do better in the 21st Century than they did in the first. Christ, help us to notice you wherever you are and whatever you do, even if you’re in a place as unlikely as a dirty, stinky barn.

What are your Advent Traditions?