There are some great Assassin's Creed costumes available for your next Cosplay, a convention, or for Halloween. They have a wide variety of price points from the decently cheap Assassins Creed costume jacket, to the more expensive but highly detailed, handcrafted cosplay costumes.

These costumes are perfect for any fan of the Assassin's Creed video games. He can dress up as his (or your) favorite character from the franchise. Do you want to be (or be with) AltaÃ¯r ibn-La'Ahad, Ezio Auditore da Firenze, Connor Kenway, or perhaps even Desmond Miles? With the selection of costumes you can bring to life the characters from one of my favorite video games.

Here is an awesome video of someone truly bringing the game to life. They are pulling off incredible parkour moves just like in the game, while wearing an AC3 cosplay costume.

These hoodies are perfect for when you want to be Desmond Miles, ancestor of all the great assassins. Perfect for the guy who wants to be the modern day hero. This could also be great costume idea for the man who doesn't really like wearing costumes. While it is a great representation of the Desmond Miles character he could play it off as just wearing a regular hoodie. 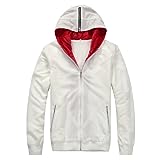 This one has the wings on the back.

Would you like to be Altair, the first Assassin in the series? Perhaps you relate to his story of failing the first time, only to work your way back to the top. You want to be the guy that advanced the Orders way of life. Be the brash arrogant Altair from the beginning or the wise calculating Altair from later in the game.

You can be Ezio Auditore da Firenze a nobleman who lived during the Italian Renaissance. He starts out living an easy life of privilege. That all changes when his family comes under attack with his father and brothers being hanged and he is labeled a traitor. He needs to protect what remains of his family by getting his mother and sister to safety.

He begins his journey to becoming an assassin with a quest of vengeance, to kill the man responsible for the murder of his family, Uberto Alberti. Once he has achieved his goal he moves on to tracking the Templars and freeing Rome.

This is perfect outfit for the man in your life who is not only a man's man he is also a ladies man. The type of guy every man wants to be and every woman wants to be with.

Connor Kenway born to an English father and a Mohawk (Kanien'keha:ka) mother lived amongst the Kanien'keha:ka as a child. When his village is attacked and burned down, ending in the death of his mother, he seeks out revenge.

Believing that Charles Lee and the Templars were the ones responsible, he joins the Order in hopes of preventing their return. He unwittingly plays a key role in the Revolutionary War, participating in some of its most famous battles. He gets to be a Captain on the high sea.

Connor is great costume for the man who stands for justice and doing what is right. The man who will do whatever it takes to protect those that he loves.

Perhaps you prefer the life of a pirate, setting sail for the open sea. Then Edward Kenway is the one you want. While he started out as a privateer, he turned to piracy when he lost his job. When he became stranded on an island with an assassin, he ended up taking his identity.

If you are going to be Connor you will want to be carrying his tomahawk to complete the look.

There are some great conventions coming up in Canada where you can show off your love for your favorite characters. There are Cosplay and Masquerade events at all of them, giving you the opportunity to show off your purchased costumes and compete if they are homemade.

Which Character Do You Want To Be (or be with)?