At the botanical gardens train show you can see G scale trains running through notable landmarks that are all made from plant materials.

Applied Imagination, who are the same engineers behind the New York botanical gardens train show, have made their first Canadian debut here in Burlington at the Royal Botanical Gardens.

While the New York show features famous New York landmarks, the RBG train show features landmarks from all across Canada. Some of the familiar sites include the horseshoe falls, the CN tower, and the parliament building. The design for the train show includes more then 7 tons of cedar slabs, 3,000 pounds of rock, and 250 feet of track.

The show will run this year every day from November 15 2014 until January 4 2015, with special guests appearing on the weekends. Some of the guests appearing are magicians, musicians, and choirs,

Video of The Train Show

My cousin and her sons came to visit during the holidays from the east coast. Both of her boys are into model trains and she is an avid gardener. So I thought what better place to take them during their stay then to the Botanical Train show at the Royal Botanical Gardens.

The boys loved seeing all the trains and the "cool" ways that they had set up the tracks. Their mom loved the flowers and seeing how they included plant matter into the set up. We went during the week so we did not get to have breakfast with Santa, we only got to visit him in his cabin.

I chose to take them later in the day so that after stopping for dinner we could then stop by the Burlington Festival of Lights . It made for a fantastic day of sharing some of the holiday traditions with our family. It cost $12.50 per adult, $7.50 for kids 4-12, and it is Free for kids under the age of 4.

Create Your Own Train Show

This is one of the train sets that are featured in the show at the RBG.

This is one of the most popular choices, especially during the Christmas season.

There are at least six trains running on the tracks in the main room. The tracks are set up on different levels. The trains cross over bridges and go through tunnels, all of which is made from plant material.

Within the display, set out around the tracks, are many Canadian landmarks and highlights. Which includes replicas of the CN Tower, the parliament building in Ottawa, the Horseshoe Falls, igloos, grain elevator, and a lighthouse.

This beautiful flower Christmas tree is in the hall leading into the second display room that you can visit. In there is another train on a set of tracks and a small hand pump car. Also in this area there is also a wide variety of flowers and cactus on display. You can also sit on a bench and watch the fish in a small indoor pond.

Weekends At The RBG

During the weekends they have additional entertainment available. Santa Clause appears from 1pm to 8pm on Saturdays and 10am to 4pm on Sundays from November 15 until December 21 2014. On November 22 and 23 and December 20 and 21 he brings some of his reindeer with him. There is an opportunity to have breakfast with Santa and Mrs. Clause on December 7,13 & 14. However you need to book ahead if you want to participate.

Each weekend they have other things to participate in while you are there. There is natural crafting, make popcorn garlands, and story time. They also have some performers, which can be magicians or musicians. You can check out who will be there at RBG - Holiday Traditions .

Location of the Royal Botanical Gardens 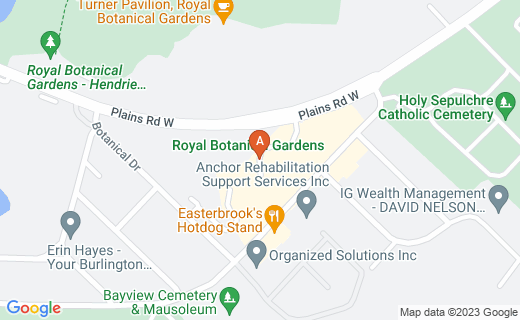 Here is a map to show you where it is located. If you click on the link above, you can get driving directions from where you are.