The Abominable Snowman in Rudolph the Red-Nosed Reindeer

Bumble the abominable snowman has been involved in our families Christmas traditions for years. It started when I was very young, watching all the Christmas specials with my older sister. We watched all of them year after year, even when we were no longer kids.

One of our favorites was Rudolph the Red-Nosed Reindeer, but when I was really little I found Bumble the abominable snow monster to be kind of scary. So I used to hide my face behind my sister. I figured she was older, so she would protect me. When I was older, I noticed more how adorable he was when he helped to decorate the tree at the end of the story.

Watching this Christmas special together was what started it all. It has a great story about accepting people (or in this case also animals) who are different. As much as you may run them down and think they are unworthy the maybe exactly who you need to help you. It also shows the value of friendship and how much supporting each other means.. It is currently on sale for $12.99.

This DVD package has 7 of the holiday specials that we watched as kids and still continue to watch every year. It of course has Rudolph The Red Nosed Reindeer. Also included on the DVD are Santa Claus Is Coming To Town, Frosty The Snowman, Frosty Returns, Mr. Magoo's Christmas Carol, Little Drummer Boy, and Cricket On The Hearth. It is currently on sale for $15.73.

Gift For My Sister

When my sister moved away, I wanted to get her something for Christmas that would remind her of how we had spent our time together during the holidays.

I found the perfect gift in this abominable snowman Rudolph ornament. It was great to see her face when she got it. She immediately understood this wasn't a random ornament but one which was linked to our childhood.

Then the next year I found this Bumble ornament for her that had him in his cave. She loved both of them and she put these ornaments on the front of her Christmas tree every single year.

However where they were placed on the tree changed when her daughter became old enough to watch Rudolph. My niece then decided that she no longer liked the abominable snow monster ornaments and would move them to the back of the tree. This started a new Christmas tradition... 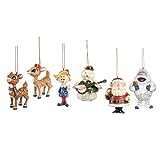 This collection includes the original Bumble ornament that I bought for my sister. However it also has Rudolph, Clarice, Hermie, Sam the Snowman, and Santa. This gives you most of the main characters from the show. They are a great way to show your love for this Christmas special.

She would help decorate the Christmas tree, always putting them near the back of the tree. Thus began the tradition of moving the Bumble the snowman ornaments to the front of tree and seeing how long it would take before she noticed.

Of course once she did, they were immediately moved to the back of the tree again. Days later I would moved them again and when she found them she would put them back. This still continues to this day even though she is now a teenager.

Last year she renewed the involvement of the humble Bumble into our Christmas. She gave me this plushie of Bumble the snow monster made by Funko. So now I just have to figure out what to give to her this year, so she will have an abominable snow monster of her own.

Which Gift Do You Think I Should Give Her? 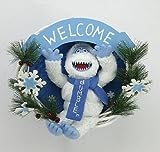 I am thinking about getting one of these this year to leave on her front door for Christmas morning. She could even hang it on the door to her bedroom during the rest of the year . 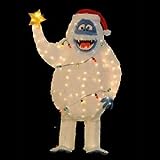 I don't think she is ready for this yet. At 5 feet high this one would almost be as tall as she is. However I think this will be great for in the future, when she is older and moves into her own house. It will be perfect for being on display on her front lawn.

I Love This Bumble Video

Was Bumble Your Favorite Character? - If not who was your favorite?