6 Christmas Gift Ideas For Cooks / Chefs With A Twist

What are some gifts, which are special and extraordinary, that you can choose to give to cooks or chefs for Christmas?

"What am I supposed to give to the cook or chef that I know as a Christmas gift?" you ask. "Just giving them some random cooking utensil doesn't seem right at all. It seems too plain and ordinary.

"Is there any way to make Christmas presents like these appear unique, appealing and interesting? Are there any gifts for chefs, cooks and those that love cooking that is more than just a novelty item or something nice to look at?"

If this is what you're thinking of (or something like that anyway), then you've come to the right place. Let's take a look at some of the possible gifts that you can choose to give to a chef or cook for Christmas, all of which have a unique and interesting twist that make them all the more appealing and special as presents.

"Kitchen utensils," you scoff, "you want me to give the chef or cook that I know ladles and spoons and the like? What's so special and unique about that? It's obvious that they already have kitchen utensils. They love to cook, remember?"

Before you say or think of anything else, take a look at the item featured to the right.

Of course, you shouldn't have to end up giving your chef some random kitchen tool that he or she likely has already (unless theirs happens to be broken or something).

Instead, you can give your cook kitchen utensils that can be considered to have leveled up as compared to other regular and ordinary kitchen tools.

Joseph Joseph Elevate Carousel Set is a perfectly good example of this.

As you can see, this product consists of 7 kitchen utensils, including a ladle, spaghetti server and solid spoon, so you're not just giving your chef one item but a set.

Furthermore, this set even includes a flexible turner and a rotating storage stand or what can be called the carousel.

With this, your cook can easily store their kitchen utensils and it shouldn't take too much space in their kitchens.

The coolness of this product doesn't end there as we've barely begun. These utensils aren't just pretty and nice to look at, what with their handles coming in assorted colors, they're also easy to hold and grip.

More than that, the handles are actually weighted, which allows the heads of the utensils to rest above the surface of whatever they're put on, which explains the "elevate" in the product name.

To see this feature in action, look at the YouTube video to the right, which also shows other features of the Elevate Carousel Set. Your cook or chef would surely love getting items like this as a Christmas gift especially since these kitchen utensils can be very helpful and useful for those who love cooking.

Cutting Board With iPad Stand

The Orange Chef Cutting Board with iPad Stand, Black
Easily follow recipes and instructions while cutting and cooking thanks to this chopping board with iPad stand
Buy Now

"A cutting board," you incredulously say, "you want me to give a chef a cutting board? You're kidding, right? They probably already have one and, unless theirs happened to be broken or something, I wouldn't even want to consider getting them something that they already have."

And, indeed, it's pointless and useless to give someone something they already have even if it could be a good Christmas gift.

But the chopping board featured to the right isn't just a mere cutting board and it is for this reason that this product is listed here as a possible Christmas present for someone who loves cooking. So, what's so special about this chopping board that isn't just a chopping board? If you look at the images here, you'll see that the cutting board isn't the only thing that's being shown. You can also see an iPad (as well as some carrots and a knife but that's not the point here).

This unique and special cutting board also doubles as an iPad stand so that your cook can easily cut and chop things whilst looking at the recipes in his or her iPad without having to go elsewhere in order to do so.

Their iPad will be right in front of them and they can easily look at their recipes even as they chop and cut the food on the cutting board. But don't forget to remind them to be careful lest they keep looking at a recipe on their iPad that they forget to look at whatever they're chopping and accidentally end up hurting themselves.

"Okay," you thoughtfully say, "what's so special about these measuring cups that you would want me to consider giving these as gifts to the chef or cook that I know?"

Well, for starters, these measuring cups aren't in the shape of regular, ordinary, normal cups.

Instead, they're in the shape of the Matryoshkas (Russian dolls).

If you look at the images here, you can see just how cute these Russian dolls are.

However, aside from being just utterly cute, they're also fully functional as measuring cups.

These measuring cups are also very easy to store and they won't take up much space because you can store them just like how you would store the Russian dolls.

If your cook or chef loves dolls, especially the Russian dolls, aside from cooking, then they would surely appreciate getting these cute measuring cups as a Christmas gift.

These dolls are even red in color, which helps to add a bit more Christmas cheer to a household kitchen. 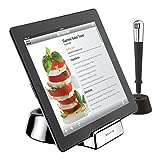 "Wait," you say, sounding a little confused, "didn't we just cover tablet stands for cooks with that chopping board? Why are we discussing stands again? What's so special about this one anyway?"

First, note that the item featured to the right is very much different from the previously-mentioned cutting board with iPad stand.

This one is just a stand for tablets but it also includes a wand or stylus for said tablet.

More than that, the Belkin Stand itself is especially designed for use in the kitchen.

The design and base of the stand makes it easy to rest on kitchen counter tops or tables.

There's also no fear of falling stands and tablets even amidst wet kitchen counter tops because the Belkin stand's base is made of rubber.

With this stand, you can have your tablet within easy reach in the kitchen so you have access to all the recipes stored in said tablet.

So, whether you're chopping or stirring or doing all sorts of cooking in the kitchen, you can easily look at the recipes in your tablet.

But let's not forget the stylus which comes with this product since it's as useful as the stand itself.

The stylus lets you make use of the touchscreen of your tablet without you having to touch the screen with your fingers, which may be covered in flour or crumbs or whatever else ingredient that you may be cooking with.

The stylus thus prevents your tablet's touchscreen from becoming dirty.

You even get a stand for your stylus so when you don't need to use it, you can just rest your stylus on its own stand where it won't get in your way while you're busy cooking.

"Did you just say sharpener?," you say with surprise, "What would a chef or cook want with a sharpener and what's with that peeler you added with the sharpener? What is this product supposed to be anyway and what's so interesting or cool about it?"

Yes, if you look at the product featured to the right, then you'll see that it is indeed in the form and shape of a sharpener.

For all intents and purposes, it even looks like a sharpener and it even seems like you can use it to sharpen your pencils.

However, this particular item is actually a sharpener and peeler for carrots and the like, just like you can see in the images here.

This item fits the description of unusual, unique and very much interesting. After all, whoever heard of carrot peelers that are in the shape of sharpeners?

It looks cute and funky and cool and chefs that like things like that would surely be delighted and amused to receive such a Christmas gift as this.

Karoto Sharpener & Peeler comes in two colors - black and orange so you can pick out which of the 2 colors your cook likes best. This item doesn't just peel or sharpen as its name says but it also enables you to make nice-looking designs with your carrot as you can see in the image to the right.

6. Games for chefs and those that love cooking 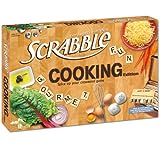 "Hold on," you say, looking incredulous. "Did you just suggest I give games to cooks? Seriously? But what does that have to do with their love of cooking? And why would they be interested in getting games as a Christmas gift?"

Chefs would be more interested in games if the games they're going to get actually have something to do with their love for cooking, which is why, if you are going to give them such a present, then it's best to stick with products like the one featured to the right.

Games with a cooking theme like the cooking edition of Scrabble are sure to pique the interest and curiosity of those who love to cook because these kinds of games seem to say it's all about the cook.

Furthermore, these kinds of games would surely be doubly appreciated if your chef also has an interest in playing games aside from cooking and baking.

The Scrabble Cooking Edition is different from the normal and regular Scrabble in many different ways, foremost of which is the style and look of the game board, which, as you can see in the image to the right, has a very nice cooking theme and design.

Aside from the mini grocery bag that will hold all of the letter tiles, you also get recipe cards and tile racks that can hold both tiles and recipe cards.

The recipe cards add a different twist to the regular game of Scrabble, a cooking twist, of course and you even get bonus points for spelling words related to food and cooking.

Other people might even be interested in this game especially if they're rather sick and tired of the usual game of Scrabble and are looking to spice things up a little.

Which Christmas gift will you give to your chef?

These are just some of the Christmas presents that you could choose to give to the cook that you know.

Rather than resorting to giving them items or products that come across as plain and ordinary, you could easily spruce things up and come up with presents that seem special and interesting.

What do you think of these possible Christmas gift ideas? Do you think that the chef that you know will appreciate and would love to get one of these gifts for Christmas?

Whatever kind of present you decide to give to your friends and family, don't forget to include a Christmas card with a short sincere and meaningful message to it.