The 12th of February is Charles Darwin's birthday, a great day to celebrate this great man's life. Darwin Day is held every year on Darwin's birthday and it's a great excuse to hold a birthday party, go to a museum, read The Origin of the Species, and above all remember what a difference he's made to our knowledge of our world.

Go for a Walk

Go out into the woods, the wild, and look at our world. True knowledge comes from observation, so observe our amazing planet.

Go out into nature and observe it. Take a walk and look at the plants and animals. Take notes and sketch what you see. Pick leaves and outline them in a notebook. Learn about nature and the world about you.

Life is amazing and incredible, millions of years of evolution have led up to what we see around us, savor the awesomeness of life every day, but most especially this day.

Read the Origin of Species

A book changed how the entire world viewed humanity, shouldn't you read it? Unlike many classic books, Origin of the Species is an interesting read and easier to understand than you'd think. Read it and see what you've been missing.

On the Origin of Species - A Facsimile of the First Edition 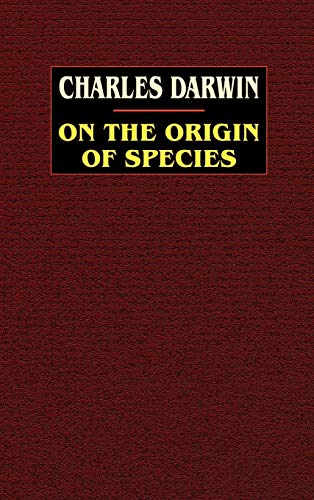 On the Origin of Species: A Facsimile of the First Edition
This is the book that broke the theory of evolution to the world. Many people have never read the real book, and instead surmise what it must say from their own beliefs. Read the book that started it all.
Buy Now 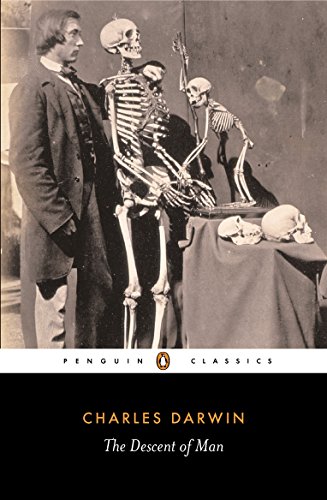 The Descent of Man (Penguin Classics)
Available in Paperback and has 864 pages. The Descent of Man discusses what Darwin didn't in the Origin of the Species, humans in the evolutionary tree of life. Darwin believed that a form of natural selection, sexual selection, was a primary driving force in evolution. How and why animals chose their mates, the effects of those choices, and how it affects everything from bugs to people. Full of clear illustrations and an impressive dialog of why we are what we are.
Buy Now

This bronze sculpture of Charles Darwin was created to celebrate the bicentenary of his birth, February 12th 2009, through the generosity of Dr Alan Smith (1964). In contrast to the universal image of Darwin as an elderly, bearded man, this sculpture depicts a twenty-two year old Darwin (in May 1831) during his final year at Christ's.

About the statue. In his hand is a volume of Alexander von Humboldt's Personal Narrative --a book that triggered Darwin's desire to travel and observe the geology and natural history of far-away places. Beneath the tails of his coat are other important books from his time at Christ's --William Paley's Natural Theology, John Herschel's Preliminary Discourse on Natural Philosophy, and James Stephens' Illustrations of British Entomology. Look out for Brachinus crepitans while you are admiring the statue, it echoes one of Darwin's great passions (collecting beetles). 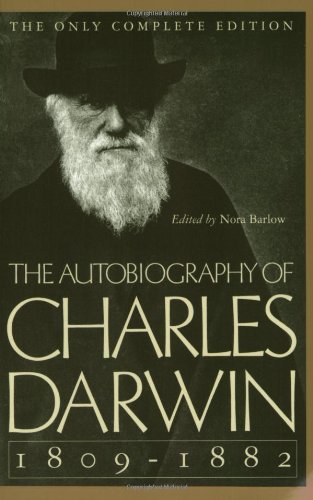 The Autobiography of Charles Darwin: 1809-1882
Comes in paperback and is 224 pages long. This is an autobiography, written by Charles Darwin himself about his life. This edition was edited by his granddaughter, Nora Barlow, and is more complete than other versions, even including pieces that Darwin put in but Darwin's family removed from the original for being too controversial or personal.
Buy Now

Talk to Your Kids about Evolution

Knowledge is important, don't leave your children ignorant, teach them about Darwin, who he was, what he discovered about our world.

Darwin for Your Budding Naturalist

Darwin
Read it to kids from ages 6 and up, ages 8 and up should be able to read it on their own. This book is a hardcover to make it last longer, which is nice since it's a book your kids will want to read again and again. Many sections appear as handwritten entries to encourage kids to connect to the writer and everything is written in a large font for easy reading. Darwin begins with Charles' childhood, and how he liked to collect specimens and observe nature. The book then moves on to his trip aboard the HMS Beagle and later his work back in England. Filled with lovely woodcut paintings, the book is visually exciting as well.
Buy Now

Who Was Charles Darwin?
Reading level: ages 7 and up. Available in Hardcover and Paperback, this book has 112 pages. Like many of the brightest kids, Charles Darwin didn't always get along great in school. He was in trouble for conducting experiments, and yet those experiments ended up making him someone we still remember 200 years after his birth. That is something many kids can identify with. He persevered even when he was seasick aboard the HMS Beagle, which will teach kids a good lesson. Overall, this book will really connect with kids.
Buy Now

Charles Darwin and the Beagle Adventure (Historical Notebooks)
Great for ages 8 and up. Comes in hardcover and has 30 pages. Has a sturdy cover, and contains an interactive layout with maps and illustrations and portions of pages to flip. Inside it looks as though there are pages directly from Darwin's log. Contains sidebars with details about some of the talked about species of plants and animals. There are lots of images and drawings to stimulate readers interest.
Buy Now

Darwin: The Life of a Tormented Evolutionist 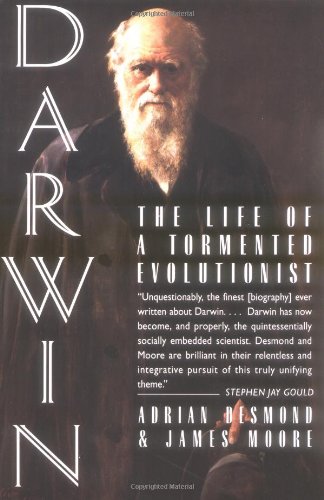 Darwin: The Life of a Tormented Evolutionist
Paperback with 896 pages. Victorian society required certain behaviors and thought-processes, how does a man like Charles Darwin come from a constrained environment like that? This biography covers Darwin's life from early on until his development of his renowned theory. Darwin's struggle for knowledge and truth went against everything he believed in, a lesser man may have ignored the evidence and stuck to what he wanted to believe. Darwin admitted the truth, even through the resulting chaos. He was human though, and had plenty of faults, this book dissects them and includes information about his interaction with other people of the time.
Buy Now

It's Darwin's birthday, so hold a birthday party for him. Bake a fun cake, like one of the ones shown below, and just have a nice party.

Many places have celebrations in honor of Darwin Day, attend one. Check out Darwin Day Celebrations for events happening around the world.

Darwin for Beginners
Paperback book with 176 pages. This is a good, basic guide to Darwin and his theory of evolution that creates a great starting point for learning more. Thoroughly illustrated and easy to understand, this book is great for the beginner.
Buy Now

Visit a natural history museum near you. Go by yourself or with children and see what exciting things there are in the world now and in the past.

Visit the California Academy of Sciences in San Francisco and see their exhibit called "Islands of Evolution". This exhibit displays actual specimens collected during expeditions, including Darwin's actual finches and Galapagos tortoise shells. 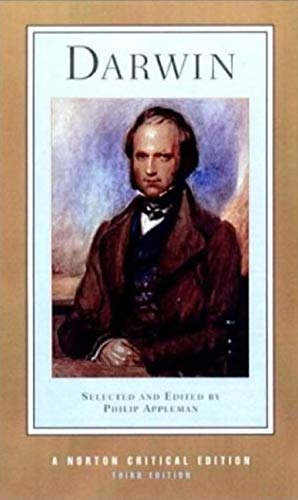 Darwin (Norton Critical Editions) (3rd Edition)
Available in Hardcover and Paperback and has 695 pages. Contains collections of Darwin's writings, as well as expanding the information contained within. The book considers the arguments for and against evolution, essays about Darwin's influence on the sciences, and studies of the political and social impact caused by Darwin's discoveries. Considered by some to be the best Darwin anthology on the market.
Buy Now

Charles Darwin and the Tree of Life - Hosted by David Attenborough

Charles Darwin and the Tree of Life (David Attenborough)
Staring and written by that famed naturalist, David Attenborough, this DVD produced by the BBC goes into Darwin's theory of evolution with insight from Attenborough and beautiful imagery.
Buy Now

Many of the animals that Darwin observed are in danger. There are groups trying to protect them, but they need your help. Adopt a tortoise, shark, passionflower, or other species for about $40 through Galapagos Conservation Trust by clicking here. Celebrate Darwin Day by making the world a better place and saving endangered species from extinction.

Get a Darwin Tattoo

The picture above is of a temporary tattoo, but Darwin Day is the perfect day to get a tattoo symbolizing your love for logic.

Creation
This movie stars Paul Bettany and Jennifer Connelly. It is rated PG-13 and includes many special features. This is the story of a complex man, struggling with the death of his daughter and his discoveries that seem to him to contradict his most closely held beliefs. His dilemma is spotlighted by frequent flashbacks and the "haunting" of his daughter. Set after his return from the Beagle voyage, the movie is primarily focused on his conflict, whether to go against all everyone wants to believe in or admit the truth of evolution, set against his probably stress-induced illnesses. Movie is not 100% accurate, but it captures the essence of the conflict Darwin dealt with.
Buy Now

Down House, was Charles Darwin's home and it is located in Downe, Orpington, England. Darwin and his family lived there for years, and Darwin worked on his books there. The house has furniture reproduced to match the originals and everything is restored, including gardens and grounds. It is open to the public and fairly close to London. Visit it and know where Darwin was coming from.

The Galapagos Islands are amazing centers of biological diversity, still relatively unburdened by humans, visit them and see the world that Darwin saw.

Learn More about the Galapagos Islands 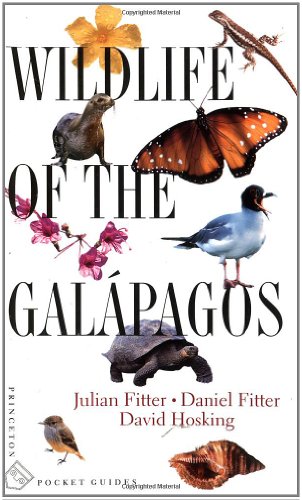 Wildlife of the Galápagos (Princeton Pocket Guides, 2)
A great complete guide to the wildlife of the Galapagos Islands. Contains hundreds of color pictures and drawings, including maps.
Buy Now

Galapagos: Islands Born of Fire - 10th Anniversary Edition
This is a wonderful book featuring the outstanding beauty of the Galapagos Islands in a photographic tour. Featuring pictures of the geology, wildlife, and habitat of this incredible place, as well as interesting commentaries.
Buy Now

Galápagos: The Islands That Changed the World
This is a wonderful guide to the islands, including history, scientific information, and wonderful color photographs. Discover the islands' endemic species. spectacular geology, and amazing animals.
Buy Now

Marine Life of the Galapagos: Divers' Guide to the Fish, Whales, Dolphins and Marine Invertebrates, Second Edition (Odyssey Illustrated Guides)
The water around the Galapagos Islands is chock-full of incredible marine life and is considered by some to be the best diving in the world. This book will help you discover it all. Written by consummate divers who have swum the waters around the islands and want to share their love of them with you. Full of beautiful color photographs, including many underwater shots.
Buy Now

Galapagos: A Natural History, Revised and Expanded
This is an easily used and lovely guidebook to the islands. Completely revised and updated, this book discusses everything from management of the Galapagos to the plants and animals found therein. Includes a checklist of plants and animals, information about touring the islands, and a glossary.
Buy Now