Elf on the Shelf DVD and Blu Ray

Elf on the Shelf: "An Elf's Story" DVD Now Available

"Elf on the Shelf: An Elf's Story" first aired in November 2011 on CBS, and is now available on DVD and Blu-Ray. The movie tells the tale of Chippey the magic Christmas elf.

(Image of An Elf's Story DVD cover provided by amazon)

"The Elf on the Shelf: An Elf's Story" is about the adventures of Chippey, who is one of Santa's scout elves. His job is to observe the children he's been assigned to and let Santa know if they've been naughty or nice. Chippey is assigned to a boy named Taylor McTuttle. According to the CBS press release, Taylor "struggles to believe in the magic of Christmas." So Chippey not only has to observe Taylor and report back to Santa Claus, but it becomes his job to restore Taylo'rs faith in Christmas magic, too.

Elf on the Shelf DVD

What's a Christmas Shelf Elf? - A fun tradition for kids

If you're not already familiar with the Elf on the Shelf tradition, it's a wonderfully fun Christmas concept for kids. The tradition is based on the book "Elf on the Shelf: A Christmas Tradition." The book explains how each year Santa sends scout elves after Thanksgiving to stay with a family until Christmas. During the day, they look like stuffed toys. But at night, they come alive and return to the North Pole to report to Santa whether the kids in the house have been naughty or nice. When they come back from the Pole, they often land in a very different place than where they were last seen before the kids went to bed, so it's a treasure hunt every day to find your elf. Kids love it! (And parents just need to remember to move the elf every night! Some of us have been known to forget, and I can tell you from personal experience that this causes chaos!)

If you don't already have the book and an elf, take a look at these options. Elves are available in both male and females versions and with different skin tones and eye colors. 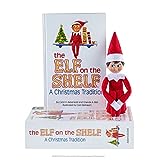 Santa Evidence Kit
Today's kids are pretty sophisticated. So if your kids are asking for Santa evidence to prove the gifts under the tree were really delivered by a man in a re...

Rudolph & Bumble the Abominable Snowman
You know Dasher and Dancer and Prancer and Vixen. And undoubtedly you've heard of Rudolph. But how many other characters can you name from the 1964 TV specia...

Where to Get Free Shipping for Christmas Gifts
Shopping online during the holidays is a great way to avoid long lines at the mall and to get great deals. In many states, you won't pay sale tax on your onl...

Kids Will Love a Letter from Rudolph the Red-Nosed Reindeer
Santa Claus isn't the only popular Christmas character who can send letters to kids during the holidays. You can also get a personalized letter from Rudolph ...

How to Create Free Printable Santa Letters
Even Santa needs a little help! Here's some advice on how to help the Jolly Old Elf send a Santa letter to your little one, complete with a postmark from...

Fun Stocking Stuffers for Everyone
Looking for fun stocking stuffers for the special people in your life? You've come to the right place. This page has a collection of fun, silly and creative ...