Cool and Unusual Halloween Costumes for a Father and Son

You're looking for a really unique Halloween costume idea for Dad and his boy? You'll find it here... or I'll eat a spider.

Anyone can come up with the idea for a Super-hero and Sidekick costume, but if you want to really turn heads this Halloween, you've gotta think outside the Batman-and-Robin box.

Trick-or-treating together on Halloween can be a great bonding experience for a father and son, so give your guys a two-part costume that will make a great memory and have them laughing together over the photographs for years to come. The spookiest night of the year is only a tiny bit about the trick-or-treat swag, after all. It's a wonderful fun time for fathers and sons to be silly together!

Photo: Father and son in zombie makeup by dennis, [CC BY 2.0] on Flickr

Is there a keen fisherman in your family? He'll love this father and son costume idea... or at least, he may not kick up quite such a big fuss about dressing up for Halloween this year! 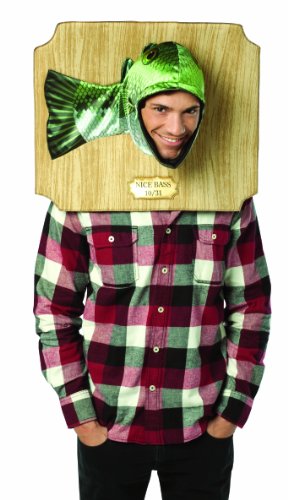 Rasta Imposta Nice Bass Trophy Costume, Green, One Size
Fellows who are DIY handy can probably come up with a homemade version of the trophy fish hat/mask costume, if you've run out of time to order online - the wooden plaque is easy enough to cut to shape from a piece of lightweight plywood, or you can use cardboard if that's all you've got on hand, but a few sewing skills might come in handy for turning a piece of sparkly fabric into a plausible fish to fit over the head.
Buy Now

Dread Pirate Captain & His Parrot - For a Swashbuckling Halloween

Father as pirate, Son as bird... Pirate and Parrot is a sure winner of a Halloween costume idea, especially if your boy is still small enough to be easily carried around. The parrot costumes for a baby or toddler are absolutely adorable, and it's not usually too hard to convince any red-blooded adult male to dress up as a pirate!

Or... dress up your little boy for Halloween as the dread pirate captain - and Dad gets to play the part of his over-grown parrot. The pirate-and-parrot costume is just plain cute when the fierce scourge of the south seas is a wee one ... but imagine how much fun, say, an 8-year-old boy could have with this bit of role play! Swashbuckling is almost certain to ensue.

InCharacter Cap'n Stinker Infant/Toddler Costume
Baby as the pirate? The satiny-stripey pants and headscarf here are fabulous, but those on a tight budget can DIY something almost as cool from Junior's own wardrobe with a few choice accessories, and maybe a curly mustache drawn on with Mom's eyebrow pencil.
Buy Now

Smiffys mens Parrot Costume,Red,M - US Size 38"-40"
Colorful, if not particularly dashing, this parrot suit for Papa... hey, a really good father would dress up as a parrot to make his kid happy, wouldn't he?
Buy Now

Have a look at the video - it's a hoot! - then read on for more on their costumes, where the boy's Halloween costume uses his dad as a living accessory.

Boy is the Master of the Creature...

For your Beast Master boy, you may already have a Grim Reaper costume on hand, or perhaps a creepy skull mask you can put together with a medieval weapon and black cloak. Heck, pick up an old charcoal grey or black bathrobe at the secondhand shop or Goodwill, if need be, to serve as his swoopy robe... as long as the outfit has got the right creepy Evil Henchman vibe, you can be fairly frugal and creative here.

... and Dad is the Son's Pet Gargoyle

For the father - ah, now there's the half of the Beast Master and Pet Gargoyle costume that makes this one special - the look of a grotesque rooftop statue is the order of the night. If a gargoyle costume is hard to come by (or beyond your budget), you can do as it looks like this inventive dad may have done, and color up a basic demon costume with a touch of grey makeup.

This grey-colored makeup for the gargoyle is something a bit special - it dries with a cracked and weathered look that gives the effect of ancient stone, not just the color. Very cool for any statue-related Halloween costume.

To complete Father's gargoyle costume, just add bat wings and swoopy robe in dark grey - or black, if that's what you can find most easily, but you might also want to sponge on grey latex paint or liquid makeup to create a faux-stone look, since gargoyles by definition are carved in stone. The big monster chain around the gargoyle's neck is optional - but if I had a living gargoyle as a pet, I'd probably want to keep it on the biggest chain I could find!

Dad plays the dog role and Junior is the mailman - or the UPS delivery guy, or the meter reader, or some other poor-guy-in-uniform who is all too likely to have a close encounter with an over-sized dog. I like the postal worker, personally, as the costume comes complete with a mail carrier's sack to collect the treats in. Or you can have it the other way round, with Dad as the guy and Son as the pup. Either way, a cute father-and-son Halloween costume, and not one that you'd see in every neighborhood.

Smiffys Dog Kit
Pair up these accessories of a puppy dog hat and furry paw mittens with Dad's own brown clothing or a dark overall to create a quick and affordable dog costume with character. One size fits all, so there's no fuss about a costume fitting.
Buy Now

Toddler Mr. Postman Costume Large (4-6)
The mailman's costume here comes complete with the shirt and pants, hat, and mail bag for carrying Halloween treats. The hat is made of foam and may not last past Halloween, but the rest of the outfit in sturdy polyester fabric will be great for playing dress-up when Halloween is over. It's available in a range of sizes for little boys.
Buy Now

Dr. Evil and Mini Me

Austin Powers fans, this one's for you. Dr. Evil and his Mini Me - as a Halloween costume for father and son, it's a "license to laugh." We only wonder why didn't we think of this before! So simple (not to mention, far more comfortable to wear than many a Halloween costume), but oh, so effective.

Matching plain grey 1960s-style suits with narrow pants and collarless jackets are the basic must-have components. Pick up a bald head cap for each of you (unless you want to get out the clippers and do a little shaving of your heads - totally optional), then strike a pose with pinkie finger to mouth, and you've got the characters nailed.

Father and Son Zombies - For Fans of the Walking Dead

Photo: Father and son, zombies forever! by noamkos [CC BY 2.0] on Flickr

Speaking of theatrical makeup in horrible shades of grey - nothing is much easier in the way of a Halloween costume than the ever-popular Zombies. Got a ripped t-shirt and a little fake blood? Just color your face to match the rotting tones we associate with the Walking Dead and practice your stumbles and mumbles... Zombies rule!

Father and son zombies is a great two-person costume for a hard-working Dad who doesn't have time to fuss around (or doesn't feel comfortable in full-on regalia) and perfect for those boys who are fascinated by all things gross and disgusting. If your son is getting to that age where he's feeling self-conscious about dressing up for Halloween but is still enough of a kid to want to get in on the fun, zombies are a great compromise costume he'll feel happy to go along with.

There are, sadly, a lot of father-son Halloween costumes out there that might as well have been copy-pasted from the family down the block... but there are also some clever ideas, well executed, by creative Dads we'd all like to hang out with for a weekend. Here are some of the very best dad-and-ditto outfits to make it online.