On our first visit to the Vendee Coast in France St Gilles Croix de Vie held a public fireworks display to music which lasted for a full half hour and in that time the sky was constantly ablaze with a constant flow of multiple fireworks; the most spectacular fireworks display we've ever seen.

Since then, whenever we holiday in France we always check the local events for the week, and in the event of any public fireworks displays that week we endeavour to fit it into our schedule of places to visit and things to do.

This article gives a brief history of fireworks from their origins in China in the 7th Century to their use worldwide since; in particular their association to Guy Fawkes in England and more importantly there use at festivals in France. I also give an overview of Saint-Hilaire-de-Riez and the Vendee Coast then an opportunity to watch the Video of the firework display itself, filmed across the bay by me on the other side of the bay from Saint-Hilaire-de-Riez. This is followed by a selection of fireworks to music photos taken by me when we watched the fireworks display at St Gilles Croix de Vie.

All photos in this hub article were taken by me while on holiday in the Vendee Coast, France.

Fireworks Display Filmed By Me

While on Holiday in the Vendee Coast, France

Below is the video I made of the view we had across the bay of this most spectacular fireworks display. Filmed at night across the bay from Saint-Hilaire-de-Riez with the sea on the Vendee coastline visible in the foreground.

Fireworks - Colorful Displays of Light and Sound (Special Edition)
Fireworks Displays Special Edition DVD, with no music or narration, shows with just the original sounds making it ideal as a background show to bring life and spark to any party or event. Non-profit public showing of this DVD is permissible subject to the terms and conditions under which the DVD is sold.
Buy Now

Public Fireworks Displays in the Vendee

The Vendee, on the Atlantic Coast of France is a large area (similar in size to Devon, England) just south of Nantes, Brittany but far enough south to pick up the start of the Mediterranean weather. Therefore during the summer month's glorious weather is almost certainly guaranteed, often with temperatures reaching 35 degrees Celsius and sometimes touching 40 degrees (between 95F and about 105F).

Not only do you get the good weather and glorious soft (very fine) sandy beaches with pleasantly warm seas but there are also plenty of places to visit such as Puy du Fou, a theme park in the Vendee that not only equals but surpasses the theme park at Disney Land Paris.

So, with such good weather guaranteed its ideal for spectacular firework displays at places such as Saint-Hilaire-de-Riez, St.Gilles-Crox-de-Vie and Chateau De Commequiers.

Location of Two Firework Displays Featured in This Article 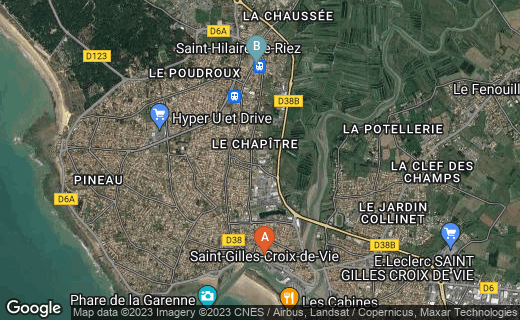 St Gilles Croix de Vie is where we’ve seen the most spectacular fireworks displays; having seen several over the years, they are always awe-inspiring.

Typical of the French, they know how to put on a spectacular show; so when holidaying in the area check for what local evening events are advertised.

Have you visited France on Holiday?

A long standing British custom is bonfire night (aka Guy Fawkes Night) every 5th November. Traditionally, in the lead up to Guy Fawkes night children will make a life size effigy of guy Fawkes, stuffing old clothes with rags (like a scarecrow) and sit it down on a street corner, shouting ‘penny for guy’; very much like American children ‘trick or treat every Halloween.

Then on fireworks night their Guy Fawkes would be burnt on a bonfire in the back garden; and as it’s burnt the parents would let off the fireworks.

Often, friends and relatives would be invited around for drinks and nibbles (an informal buffet outside); although it’s customary for invited guests to also bring a bottle of wine or a few cans of beer, and a selection of fireworks.

On such occasions the kids would be given sparklers while a responsible adult; usually the host father and a drunken friend would take responsibility of lighting the fireworks safely in the back garden. Needless to say bonfire night is the busiest night of the year for the fire brigade and ambulance service.

Alternatively, parents who don’t organise their own private bonfire night or don’t go to a private bonfire, will often go to one of the many official public bonfires.

Guy Fawkes was a Catholic nobleman at a time when Catholics tended to be persecuted by the Protestant Monarchy; King James I, who ruled Britain from 1603 until his death in 1625, being no exception. Prior to the gunpowder plot King James I tolerated Catholics provided they were quiet and gave an outward obedience to the law; and unlike his predecessors, he preferred exile to capital punishment as a more tolerant solution.

However, many Catholics felt persecuted, including Guy Fawkes, who had ten years military experience and knew how to use gunpowder. With his skills and knowledge of gunpowder, Guy Fawkes (and 11 other conspirators) plotted to blow up the King and Government on the State Opening of Parliament by the King (following a recess) when he and the whole of the government would be present e.g. the 5th November 1605.

The conspirators smuggled 36 barrels of gunpowder into the cellars of the Houses of Parliament (enough to reduce it to rubble, and kill all inside). However, one of the conspirators made the mistake of sending an anonymous letter to fellow peer (also a Catholic) on the 26th October 1605, advising him not to attend Parliament on the 5th November. The peer bought the matter to the attention of the King, and although the letter didn’t spell out the details, it was enough to alert the King of a potential plot; and consequently Guy Fawkes was caught red handed in the morning of the 5th November in the cellars below the Houses of Parliament, ready to light the fuse when the King and Government would be occupying it.

Following Guy Fawkes arrest, interrogation and confession the Sheriff of Worcester and his men attempted to round up the other conspirators, which led to a number of them being killed in the ensuing battle (as they resisted arrest). The eight survivors, including Fawkes were convicted and sentenced to be hanged, drawn and quartered at their trial on the 27 January 1606.

So the rhyme that begins “Remember, Remember, the 5th November….”, and the tradition of bonfire night every year is in remembrance of when Guy Fawkes tried to blow up the Houses of Parliament.

Fireworks Origin and Use

Fireworks invented by the Chinese in the 7th century, where they were first used for festivities; and they've been used worldwide for public displays in festivals and for celebrations since the 10th century.

In England 5th November is 'Fireworks Night' (aka Guy Fawkes) to mark the foiling of Guy Fawkes gunpowder plot to blow up the Houses of Parliament in 1605 although some people may think it's in celebration for his attempt!

In France firework displays are common, especially in the Vendee being held in many local towns during the summer months at the height of the tourist season. St.Gilles-Crox-de-Vie frequently hold such displays; sometimes to music which is very impressive.

Although not fireworks a sunset can be just as spectacular, and for a good sunset in France few places rival the view from the peak of La Dune du Pyla in southern France near Bordeaux; as shown in this video clip filmed by me when we were on holiday there a few years ago.