When I hear the words Flapper costume images of bob hair cuts, my red fringed flapper dress and long beads come to mind; however, the flapper style was an outward expression of social and political changes emerging during the 1920's.

I have always been drawn to the image of the flapper because to me the flapper style represents freedom. The bob hair style, still popular today, is a physical representation of this freedom. I always love this style of hair and in my teens and early twenty's I wore my hair in this style. Perhaps I was trying to recreate a sense of the freedom that the young flapper invoked.

Travel with me as we explore the roaring 20's and the Flapper style. Learn about the cloche hat, finger waves and the shift dress.

flapper hair accessory by Bellafaye, on Flickr reproduced under CC BY 2.0 license 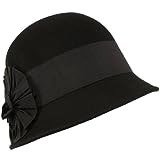 Wool Winter Cloche Bucket Bell Ribbon Bow Hat Black with Black Hatband
I really love this black cloche hat. Whether for a costume or everyday wear it makes a statement. The ribbon detailing on the hat with the black bow.is stylish.
Buy Now

In the 1920's women wore their cloche hats with a sense of pride. Only women who wore their hair short could wear the cloche hat because it was designed to fit close to the skull. The cloche hat became a staple of the flapper style of dress. I really like this look because it draws people's attention closer to the eyes and the face.

The cloche hat is evidence that even foreheads can be unfashionable.A cloche hat can be described as a bell like hat that fits close to the head. The brim of the hat covers the forehead and sits above the wearers eyes. The cloche hat was usually made of felt but could be made of other materials as well. These hats usually followed straight lines but they could be embellished much like the flower cloche hat in the picture.

I think if I had been wearing one of these sensational cloche hat in the 1920's I would have preferred to embellish mine with some jeweled clip or flower accent.

The best free tutorial for making a cloche hat that includes an actual pattern can be found at at mymagicmom.com. You even get to see a picture of the finished cloche. It's a very adorable hat for an adorable girl.

There are so many elements that make up the Flapper costume. It is hard to pick on specific element that I love the most but if I am pressed the cloche hat is my favorite Flapper accessory.

What's your favorite part of the flapper costume?

Dressed in a Flapper Costume

Eileen as flapper - 2004 by chickydangeron Flickr, reproduced under CC BY 2.0 license

Forum Novelties Roaring 20's Flapper Dress and Headband, Red, Medium/Large (fit 8 to 12)
I love the vibrant red color of this fringed Flapper Girl Dress. This one is similar to the one I own. The fringe detailing makes it perfect dance outfit. This Flapper costume comes with the headband with feather.
Buy Now

The Bob and the Eton Crop

During the 1920's long hair became less fashionable. Girls tresses became shorter and shorter, from the 3/4 length bob to the Elton Crop.

The Elton Crop was a more severe hair cut. Those who chose to wear this style walked with pride as it was the best way to fit the skull tight cloche hat. The Elton Crop was most prominently worn in the lesbian community according to Wikipedia.

For an authentic Flapper costume you will want to showcase a shorter hair do. A wig is the easiest way to the Flapper inspired hair; unless you hair is already cut in a bob or Elton Crop.

Want to get that beautiful 1920's hair style? If so, you will need some gel, a tail comb, and tons and tons of patience. This is absolutely beautiful when finished. I'm not sure I have the skill or patience to do this but I might give it a go one of these days.

The video is done in real time to show you how long it actually takes the artist to do her hair this way.

Fashion before the flapper fad emerged had women in long dresses that accented their curves, but with the rise of the flapper the female fashions adopted a more masculine perspective. The style favored small breasted women as it was narrow at the top of the dress and out at the hips. The dresser became shorter exposing more of the legs and arms, suggesting a new awareness of their sexuality. This changed was spurred on by women's growing political and social independence.

The Shift Dress needed to be easy to move if for dancing. These dresses could be accented with fringe.

Flapper dress by quinet on Flickr reproduced under CC BY 2.0 shows the Flapper trend in Germany circa 1920. The dress is longer than some of the other variations in the United States.

When choosing a Flapper costume you want something that reflects the fashion style of the 1920's. You want a costume that you can easily wear for a few hours, a costume that accents your dance moves, and a costume that will make your friends green with envy.

Popular in the 1920's was the buckled Mary Jane shoe. An independent girl, a flapper, would complete her fashion statement with a pair of these buckled shoes.

As a flapper frequented speakeasies they were usually seen with long cigarette holders. This is the only regrettable flapper costume accessory. This was before the surgeon general warning of cigarette smoke leading to cancer.

Luckily for the flapper costume you only need carry the plastic accessory without the cigarette.

Depending on the accessories your Flapper costume comes with you may want to dress it up a little. Here are a few accessories that can make your style stand out. 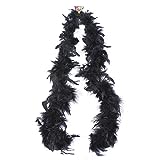 Rhode Island Novelty 6 ft 35G Black Feather Boa, One Per Order
A deluxe boa will give your costume a lot more presence. It's a great way to make an entrance.
Buy Now

Jacobson Hat Company Women's Headband with Rose, Black, Adult
If your dress does not come with a headpiece and you do not want to wear a hat you might be the market for this rose feathered headband.
Buy Now