Stephanie is fascinated by both Halloween and history and thoroughly enjoyed combining those two interests.

Halloween Has a Rich History

Halloween is the spookiest time of year, and many people's favorite holiday. Filled with ghosts and witches, the holiday has a sense of mystery surrounding it. Everyone knows the traditions we enjoy today of dressing up, trick or treating, and carving pumpkins, but have you ever delved into the history of Halloween? There's tons of cool trivia ranging from fun to creepy. With centuries of history, it's not surprising that Halloween has evolved a great deal over time and it's fascinating to learn more about its roots.

The Origins of Halloween

There’s some debate about just how Halloween began. Many people believe it’s influenced by the harvest festivals of western Europe and by the festivals of the dead. Others think the Celtic Samhain (meaning Summer’s End) was the origin of Halloween. Some also suggest that both celebrations contributed to the evolution of the holiday into what we know today. The idea that the holiday originated from pagan festivals and the present day trend of dressing up as witches and devils has resulted in some Christians rejecting the holiday. However, most people consider it to be harmless fun.

The name “Halloween” comes from Christian roots. It is the short form of the original All Hallows’ Eve. The phrase All Hallows has been around since Old English, but the first record of the specific name All Hallows’ Eve is from 1556. The term refers to November 1st, All Hallows’ Day, known more commonly as All Saint’s Day. This day has been celebrated since the year 609 as a way to remember the church's martyrs, although it used to take place on May 13. In 835, Pope Gregory IV changed the date to November 1.

The Samhain festival, also celebrated November 1, was a day in which people believed that the divide between the world of the living and the world of the dead was gone. Spirits who had moved on could revisit their homes on this day. However, evil spirits could also cross over and cause harm.

Trick or Treating is usually thought of us a modern tradition, loved by children and encouraged by candy companies. However, the roots of trick or treating likely date back several hundred years. In the late 12th century, a tradition began called “souling.” All Saints Day and All Souls Day were meant to celebrate the souls who had gone to Heaven and those who were waiting in Purgatory. Christians would bake “soul cakes” and poor children would go door to door collecting them to pray for the lost souls in Purgatory.

This tradition was found across Europe, even into the southern parts of Italy. References are also found in Shakespeare’s The Two Gentlemen of Verona. While the custom of trick or treating is certainly different today than what was practiced 800 years ago, it seems likely that it evolved from the practice of baking and handing out soul cakes.

What are your plans this Halloween?

Our modern tradition of dressing up in costumes for Halloween can also be traced back to All Saints and All Souls day beliefs. Since the worlds of the dead and living were believed to be less distinct during the holiday, people wanted to protect themselves from evil spirits. It was thought that on All Hallows’ Eve, spirits who wanted revenge on the living had this one last night to finish their business. People would wear masks and costumes in order to conceal their identity from these vengeful spirits until they passed on during All Souls Day.

Carving pumpkins into jack-o-lanterns is essentially a North American custom. There is a common belief that it has evolved from an Irish tradition of carving and lighting turnips to guide souls on All Hallows’ Eve. They were also said to be placed in windows to protect houses from unwanted evil spirits. However, there is no proof that the Irish carved turnips as part of their original All Hallows’ Eve customs.

We might never know for sure, but it seems that jack-o-lanterns might be a truly North American Halloween tradition. In particular, pumpkins are used almost exclusively in North America. In Europe, turnips are more common because they are easier to grow than pumpkins.

Like many symbols, there is a story behind the jack-o-lantern. The tale has several different versions, but each centers on a farmer named Jack. In each version, Jack finds a way to trap the Devil using a cross. Once the Devil agrees not to take Jack’s soul, Jack lets him go. However, because Jack did not lead a good life, he cannot get into Heaven once he dies. The Devil holds up his end of the bargain, so he also cannot get into Hell. Jack is left stranded as a spirit on Earth. The Devil mockingly throws Jack an ever-burning coal from Hell so that Jack can find his way in the dark. Jack carves a turnip and places the coal inside. Jack is cursed to wander the earth forever, having only his lantern to guide his way. 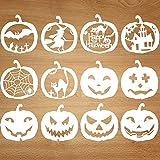 Most people know that the black cat is a symbol of Halloween because they are thought to be witches’ familiars, but not everyone stops to remember how sad the black cat’s history is.

In the middle ages, when talk of witches was common and witch hunts abounded, people began to think black cats were evil and unlucky. Many of the women who were thought to be witches were old and lonely. They either had cats, or fed the many ally cats that roamed the streets. Because of this, people assumed the cats were in on the witchcraft. Some people even thought that the “witches” turned into cats. Many poor cats were killed alongside their supposed witch caretakers.

It would turn out that hunting down cats for witchcraft has some drastic consequences. These cats were great rat catchers and with the cat population dramatically decreased, the rats thrived. Rats, of course, carried the Bubonic Plague, or the Black Death. The surging rat population was able to spread this fatal disease much faster and more effectively with fewer cats around to catch them.

While witch hunts and the practice of burning witches (and cats) has thankfully gone by the wayside, there are still people who believe black cats have a link to the occult. Rituals involving black cats (or sometimes any cat) are still sometimes performed at Halloween. Some shelters won’t adopt out black cats during October for fear they may fall prey to one of these rituals. It’s also a good idea to keep your black cat indoors during this month, just to be on the safe side.