There are many pirate themed decorations including skulls, hanging skeletons, pirate flags and pennants, posters, balloons and treasure chests.

There are links to recipes for pirate food for both adults and kids and pirate drink recipes for adult parties.

The Allure of Pirates

There is something special and alluring about pirates that captivates the imagination. Perhaps it's our hidden desire to be able to do whatever we want regardless of the consequences. Perhaps it's the idea of freedom out on the open ocean.

Whatever the reason, pirates are a popular and important part of pop culture. From Peter Pan's 'Captain Hook' and Jake and the Never Land Pirates to Johnny Depp's portrayal of 'Captain Jack Sparrow' in Pirates of the Caribbean, pirates are a key theme in many movies and cartoons. Pirates even have their own holiday - September 19th 'International Talk Like a Pirate Day'.

Have you ever wanted to be a pirate just for one day? Well Halloween is an excellent opportunity to live out your fantasy. You can dress up as a swashbuckler and host an amazing pirate themed Halloween party. Whether or not your guests come dressed as pirates is entirely up to you. Turn your living room into the prow of a mighty pirate ship and adventure awaits you. Play up the theme with ocean themed food and beverages.

Nothing says 'Pirate Party' like an invitation in a bottle. This set includes the materials for twelve invitations: plastic bottle, skull and crossbones invitation, eye patch and skull ring. The bottle label and invitation look as though they have been aged. The plastic bottle is 7 1/2 inches tall and can be shipped in the mail (check with your post office for rates).

They always say to put your best foot forward and the invitation to any party is a great way to make a first impression. From this simple card or piece of paper, your quests will know what kind if theme party you are holding (kids? adults? whimsical? spooky?) and will most likely be enticed to attend your fete.

Who is your favorite famous pirate?

Each of these great themes has matching napkins and cups that can be purchased separately.

These pirate themed mini buckets would be great on your table. Use them to hold candy, place cards or, for an adult party, mini bottles of alcohol. They would also make great containers for your party favors. Each bucket stands approximately 3.5 inches tall.

Dozen 2 3/4" Mini Pirate Buckets
These pirate themed mini buckets would be great on your table. Use them to hold candy, place cards or, for an adult party, mini bottles of alcohol. They would also make great containers for your party favors. Each bucket stands approximately 3.5 inches tall.
Buy Now

This pirate chest would make a great pirate party centerpiece or table accent. Fill with candy, chocolate or bubblegum coins or glass gems. 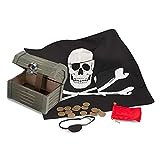 Pirate posters are a great way to add ambiance to your pirate party. They can be hung in the entrance way, bathroom or in the main party room.

'Where There's a Sea, There Pirates Be' Poster

Buy the 'Me Booty' Pirate Poster from Allposters

This sign would be a great and humorous addition to any adult pirate party. The decoration features a buxom pirate beauty leaning against an overflowing treasure chest with the caption 'Ye can have me booty but leave me chest alone!' The sign is made of durable lightweight tin and measures 12 x 16 inches.

From scary pirate skeletons to vintage pirate heads and beyond there is a treasure trove of hanging pirate decorations awaiting you on eBay.

This is a great sign for any pirate party. It says 'Pirates Only - No Trespassing - All others will walk the plank'. The sign is made of a lightweight tin material so it is durable and will last. Dimensions: 8" x 12".

Decorate Your Bathroom With a Pirate Toilet Lid Cover - Glows in the Dark!

Don't forget to decorate your bathroom. This awesome toilet lid cover can be used to adorn your throne during your Halloween party, for September 19th (International 'Talk Like A Pirate' Day), for any pirate-themed occasion or simply just for fun any time you want. Fits over any standard toilet seat and glows all night long (based on customer reviews you need to leave the light on for a few hours to achieve a night-long glow). Very durable and you can take it off to wash it. 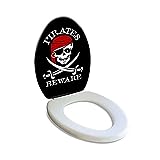 Glow in the Dark! Pirates of the Bathroom!
Buy Now

Pirate Skull Money Bank - Collectible Figurine Statue Figure Skeleton
This pirate skull is a great decoration for any Halloween Pirate party. It serves double duty as a piggy bank that can be used throughout the year. Made from cold cast resin and hand painted, this piece is 5 1/2" x 6" x 6" and has a plastic plug in the base.
Buy Now

Ever want to learn to talk like a pirate? Learn the basics, the five A's, with Cap'n Slappy and Ol' Chumbucket - aka the Pirate Guys. 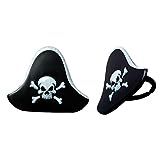 A cake is the highlight of any party and there are many great options for a pirate themed party. You could go with a pirate ship, a pirate, a treasure chest or a skull and crossbones shaped cake pan.

The perfect party food for your Halloween party is Pirate's Booty Rice and Corn Puffs. These snacks are made with natural ingredients, are kosher, gluten-free and are baked rather than fried. You can buy aged cheddar, barbeque, sour cream and onion or veggie flavor.

You can buy a large bag or a party pack with individual 1 oz bags. If you buy the party pack, then you can either include them in your party favor packs or you can serve them from a treasure chest at the center of the table.

These will be a hit at your party whether you include them in your favors, use them to decorate your place settings or serve them at your dessert table.

Each set comes with one dozen fruit flavored pirate skull lollipops on a four inch stick. The pirates have different colored polka-dotted bandanas. 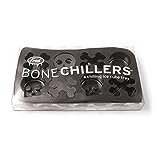 An inflatable pirate ship cooler is a fun idea for any pirate themed party and this cooler can hold up to 72 cans (12 oz size). For adults you can include an assortment of pirate themed beers: Heavy Seas, Ybor Gold Gaspar's Porter, Piraat, Dead Guy Ale, Ballast Point Tongue Buckler and Bucanero Fuerte. For a kids themed party you could have an assortment of soda pop or fruit juices.

Inflatable Pirate Ship Cooler (holds apprx 72 12-Oz cans) Party Accessory (1 count) (1/Pkg)
These ice swords are so much fun. Great for both kids and adults. Use with water or experiment with fruit juices.
Buy Now

Pirate Party Board Games on eBay

You can take all the guesswork out of party favor planning with a ready-made pirate favor pack. Each pack includes enough parts for eight party favor packs: 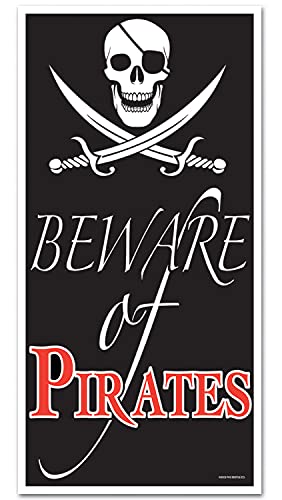 Spooky Halloween Lamps
Finish off your Halloween decorating with spooky Halloween lamps. Eerie lighting adds ambiance to a room while gargoyles and demons spark fear into the heart...

Awesome Alligator Costumes for Adults and Kids
Do you or your child want to dress up as an awesome alligator this Mardi Gras or Halloween? There are some really great alligator costumes for adults and kid...

Nevermore: Raven Costumes for Women and Men
Raven costumes are a great option for Halloween, a costume party or Mardi Gras. Ravens have fascinated people throughout history and were made famous in Edg...

Stylish & Sexy Goddess Costume
A sexy goddess costume is a gorgeous costume idea for Mardi Gras, Halloween or a costume party. If you're looking for sexy goddesses costumes, there is a gre...

Smokin' Hot Sexy Male Costume Ideas
Are you looking for sexy male costume ideas for Halloween, a costume party or Mardi Gras? I've searched far and wide and have come up with a great selection....

Beautiful No Carve Pumpkin Decorating Ideas
Do you love pumpkins but hate the mess? No carve pumpkin decorating ideas are a great way to add some glamour and bling to Halloween without the hassle and m...