OK folks, it's time to panic.

When people tell you to "chill out" or "calm down and don't panic," do you feel as if you would like to go postal? Let's face it. Life can sometimes be stressful and scary, and I think it's good to let off a little steam every now and then. If today is June 18 and you happen to be reading this page, it is your Lucky Day because this is one of very few days out of the year when you can let out all your panic, fears, worries, etc. (And in case you miss this day, don't panic, because there is also a National Panic Day which occurs every year on March 9.)

Anyway, staying calm is for wusses. So, pull out all stops, push the proverbial panic button, and "celebrate" International Panic Day. Below, I present 10 hilarious and really immature ways to let off some steam on this fun-filled holiday.

This image is available as a poster at zazzle.com.

International Panic Day. What will they think of next?

Well, I searched far and wide, and although there is a lot of buzz online about International Panic Day, there is, unfortunately, no documented history of how this holiday came to be. (Hmmm ... looks mighty suspicious.)

But don't panic, folks. This is not - repeat: not - some kind of conspiracy. When I find out more about the origins of International Panic Day, I'll be sure to keep you posted right here.

A Really Silly (But Kind Of Funny) Video

I came across this really silly video that actually does a pretty good job of getting you in the spirit of International Panic Day. Anyway, I liked the cat and the video actually made me chuckle a little.

Is this the first time you've heard of International Panic Day?

International Panic Day is best celebrated when you are more thoroughly "liquored up" than usual.

If you normally drink 1 cup of coffee per day, then drink 2. If you drink 2 per day, drink 4. If you drink 5, then 10. (You get the idea.) However, if you usually drink more than 10 cups per day and have to pee a lot, you may want to switch to espresso. And if you normally take your Joe decaffeinated, it's time you switched to the high octane stuff.

Kramer (from "Seinfeld") After One Too Many Caffee Lattes

This is not your run-of-the-mill proverbial panic button but a real hands-on one that you can actually push whenever you get the urge. When activated, it screams out various funny panic sounds and phrases. 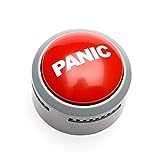 Panic Button, Red, SC7820
More than just a toy, this real live panic button is great whenever you find yourself in the midst of a crisis. Whether you are an air traffic controller, the ruler of a small country, or a student who has a major term paper due tomorrow, this handy and colorful little gadget is a must-have.
Buy Now

International Panic Day Activity #3: Listen To R.E.M.'s "It's The End Of The World As We Know It" 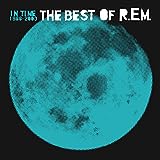 Throw a panic-themed party and, as one of the main activities, reenact a funny panic scene from a zany TV sitcom or movie. "I Love Lucy" has some of the best panic scenes, such as the one in which Lucy is about to have a baby and also the one in which she keeps pulling the emergency brake to stop the train. Some of my other favorite panic scenes also include the classic "serpentine" one from "The In-Laws" and the one from "Airplane!" in which all the passengers freak out when told that there's no more coffee. (See video clips below.)

So what kinds of refreshments should you serve at your panic party? Coffee, of course!

The above image is available as a

I Love Lucy: The Complete Series

OK, I admit it. "I Love Lucy" is one of my guilty pleasures. Over the years, I have watched countless reruns of this classic sitcom and many of the episodes, especially those with panic scenes in which everyone goes bonkers, still crack me up.

I Love Lucy: The Complete Series
This 34-DVD set includes every side splitting episode from all nine seasons of "I Love Lucy" brought to you by the Ricardos, the Mertzes, and Little Ricky.
Buy Now

Do you have a favorite funny panic scene from TV or the movies?

"Independence Day" is a 1996 disaster sci-fi action film about an alien invasion of Earth. Although parts of this movie are a bit horrific, seeing that over-sized spaceship that fills the entire sky always cracks me up. (I also threw in a video in which Will Smith punches out one of the aliens.)

"Independence Day" is a sci-fi action movie starring Will Smith, Bill Pullman, Jeff Goldblum, Mary McDonnell, and Judd Hirsch. Big trouble begins when gigantic alien spaceships appear in the skies as they try to take over Earth. A band of survivors must overcome these hostile invaders so that the end of the world as we know it does not become a reality.

Independence Day
Made in 1996, this action-packed thriller, which somehow manages to be both scary and funny at the same time with its tongue-in-cheek humor and apocalyptic story line, remains one of the biggest box office hits of all time.
Buy Now

Get together with some of your goofy friends, put on chicken costumes without the hats and run around like the proverbial "chicken with its head cut off."

Gather together as many people as possible (the more, the merrier!), throw a panic party, and have everyone each bring his/her own bell, whistle, horn, or toy siren. Then, when the clock strikes midnight, have everybody pull out all stops and sound off his/her gadget. The resulting cacophony will be hilarious!

What will you be wearing when the world comes to an end? (Oh yeah, I almost forgot. Make sure you are wearing clean underwear!)

You might remember this gem from your childhood. This is the one when Bugs Bunny becomes enraged when he finds out that rabbits are worth only 2 cents in bounty (e.g. as compared to $75 for a bear). To show the world he's worth more than that, he wrecks major havoc wherever he goes, declaring "Bugs Bunny was here!" He causes so much chaos and destruction throughout the country that the nation pulls out all stops to try to put an end to his shenanigans. (The footage of real army tanks and air forces is a hoot!) He finally ends up with his wish and is now worth $1,000,00, but ends up in Alcatraz.

Christine Kowalski of journal-news.net came up with a really great idea for celebrating International Panic Day, which is to get together with your friends and play charades with panic-related themes such as "global warming." Here are some other themes along the same lines you might also like to try: war, famine, pestilence (this one may be a little difficult), the bad economy, high gas prices, New World Order conspiracies, and going bald.

So, how will you be celebrating International Panic Day?