Last Night On Earth - The Zombie Board Game

Board Game Packed With Undead Mayhem

Last Night on Earth, The Zombie Game is a fast-paced horror board game that includes the same excitement and storylines as your favorite zombie movie. With many different characters and scenarios, this game is never the same game twice.

Created by Jason Hill and produced by Flying Frog Productions, Last Night on Earth is a wildly fun game of zombie mayhem that allows local heroes to fight against the brain eating zombies that are flooding their town.

If you are a fan of zombie movies, then this game is for you, plus you never know....this just might be your Last Night on Earth! 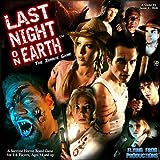 Flying Frog Productions Last Night On Earth - The Zombie Game
"When night begins to fall on the sleepy town of Woodinvale, the shadows and fog rolling in bring with them more than just a chill shiver. A living nightmare erupts as the once peaceful community is overrun with the restless dead...scratching and clawing their way to the surface with an insatiable hunger for human flesh. Now only a handful of unlikely Heroes are left, banding together to fight for their very lives. On a night that never ends, the only thing worse than death...is becoming infected."
Buy Now

To stay current on the latest news about Last Night on Earth, visit the official website from Flyring Frog Productions:

Preview some of the tracks from this soundtrack at the Last Night on Earth page on MySpace.

For a very detailed look into Last Night on Earth, watch these review videos. Keep in mind, the game is really a lot more fun then two geeky guys giving a half hour review of it make it look. It's not Dungeons and Dragons. The gameplay runs normally from about 45 minutes to 3 hours - so it's shorter than Monopoly.

Flying Frog Productions has released some scenarios for the game online. 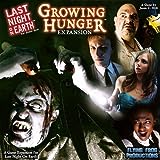 Flying Frog Productions Last Night on Earth: Growing Hunger Expansion
For anyone who plays Last Night On Earth frequently, this expansion pack is a must have. Included in this pack are more modules for the modular game board with expand the town to include more like a Supermarket, Library, and Antique Shop. There are three exciting new Scenarios, and 50 new game cards which add more weapons to the heroes arsenal and lets the zombies steal the heroes weapons. This pack also includes four new heroes, and seven new red zombies.
Buy Now

Who do you prefer to play as?

Would you prefer to play as a human or as a zombie?

Survival of the Fittest Expansion Pack

Flying Frog Productions Last Night on Earth: Survival of The Fittest Expansion
The Survival of the Fittest Expansion Pack for Last Night on Earth includes three all new card decks (Unique Items, Survival Tactics, and Grave Weapons), new game mechanics, and several awesome new scenarios. The Woodinvale heroes can now use survival tactics to stay alive, as well as use powerful items in their struggle. The zombies can now use grave weapons to strengthen their attack. I highly suggest this expansion pack for those looking to get the most from their game.
Buy Now

Last Night On Earth Zombie Game - Up for Auction

Sometimes you can catch a great deal on the game or an expansion pack on ebay. Who cares if it's used?