Kids Will Have Fun With a Magic Christmas Elf Doll

Ever wonder how Santa knows when you are sleeping and knows when you're awake? Or how does he know if you've been bad or good, for goodness sakes? The answer is that he relies on his magic Christmas elves. These elves visit the homes of children every holiday season and report back to him every night. During the day, they look like regular stuffed toys. But at night they use Christmas magic to report to Santa at the North Pole. If you're looking for a magic Christmas elf to join your family, this page has a variety of elves who are qualified to serve as Santa's helpers. Find one below to make sure Santa knows who's on the Nice List in your family!

(Image of Elf on the Shelf book and toy provided by amazon. See link below.)

Getting Started with a Magic Christmas Elf

If you're just getting started with a Christmas elf, you might want to get one of the gift sets that come with a book and an elf. The most popular, of course, is Elf on the Shelf. This book came out in 2005 and has quickly become a huge success.

Another gift set that comes with a book and elf is Christopher Pop-in-Kins. This story about an elf that "pops in" and out while reporting back to Santa Claus at the North Pole is older than Elf on the Shelf (it was first self-published in 1984), but it's not as popular.

Both books, however, have similar tales about how these Christmas elves help Santa determine who's being naughty and who's being nice. And in both stories, the elves appear to be stuffed toys during the day, but magically come alive at night when no one's looking, forcing the kids in the family to search for them in the morning. Kids will enjoy both stories! 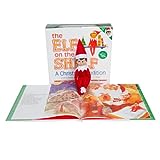 The Elf on the Shelf: A Christmas Tradition with Blue Eyed North Pole
The Elf on the Shelf bookset comes with a small light-skinned blue-eyed elf doll. Other (cuter) plush dolls are sold separately and are available in boys or girls with light or dark skin.
Buy Now

Although Elf on the Shelf may be the most popular elf helper around, these toys can also report back to Santa Claus at the North Pole. 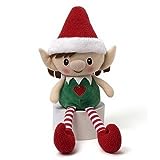 Elf on the Shelf: An Elf's Story Trailer - Animated TV special tells the tale of one of Santa's special elves

Is your Christmas elf really reporting back to Santa Claus at the North Pole? You can get a printable Santa letter that confirms it from Free Santa Letters Online.com. One of the 12 premium letter options (not one of the free letters) you can personalize is the "Christmas Elf is Watching" letter. In it, Santa says, ""The magic elf I sent to your house... has been giving me reports about your behavior..."

You can also choose any of the other 11 letter options or even write your own letter. The premium letter packages all include a personalized letter, Nice List certificate and envelope design that you can print at home on your own computer.

Kids love having a magic Christmas elf in the house!