Get Brave with a Merida Costume

The key features in any Princess Merida costume is the hair and her bow and arrow. Merida's red curly hair is one of the first features you notice on this adventurous Disney Princess. Wild and free her curls define Merida's character.

Throughout this page explore Merida costume ideas and find the right costume pieces to turn yourself or your little Princess into this passionate Princess.

In the Disney Pixar Brave Princess Merida wear more than one gown. Two of the gowns that come to mind are the seam busting blue and gold dress that Queen Elinor makes her wear. You remember the too tight dress that Merida cannot even breathe in. Her mother thinks its perfect but Merida is not so sure.

This too tight blue and gold dress Merida wears when she hits on the targets at the archery tournament is what Disney uses for inspiration for their Official Brave Merida Costume choice #1. Unlike the dress Merida wears this Disney Princess dress is designed for young kids to move in.

While the blue and gold dress is pretty I prefer the other costume choice that Disney has produced for Merida. This dress is based on the one Merida wore as she fired her bow and arrow and journeyed to return her mother back to her true form. In my opinion the forest dress seems to suit Merida best. I love the rich color used in this costume dress design.

I love both of the Princess Merida costume dresses but if I had to decide I would vote for the adventure dress. How about you?

Merida, the Scottish Princess, does not like fancy dress; instead, she would rather be exploring the woods of the Scottish Highlands.

Merida prefers to have her bow and arrow in hand. She is an active girl who prefers her everyday clothes to the pagentry of being a princess. This is much to chargrin of Queen Elinor - Merida's mother - who loves to dress her daughter in "proper" attire.

See Merida's distaste for stuffy dresses and tradition in this short preview for the Disney Pixar film Brave.

Brave Merida Gladiator Shoes - Dress up from head to toe 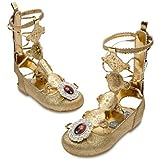 One of the first features you notice is Merida's beautifully wild red hair. Her hair is worn loose, and her luscious red locks hangs below her shoulders. Her curly hair sets her apart from previous Disney Princess Ariel whose red hair never seemed out of place even in the ocean.

Try you hand at Archery with this Brave movie inspired bow and arrow set. The perfect accessory to every Merida costume.

Every Princess needs her crown. Get a formal look with the Princess Merida tiara. Fun costume accessory to wear alone or with Princess Merida costume. Tiara features a gold and blue design.

How will you wear your Merida Costume? - Thanks for Visiting