Imagine that you are in your child's school for the annual winter concert. You listen to a buffet of the songs the chorus, band, or orchestra performs, from marches to arrangements of folksongs. You previously expected Christmas songs, but the array of songs that don't involve the holiday dashes your dreams.

Why would a school program discourage your child and his fellow singers/musicians from performing the songs of the season, or in particular, holiday. Where have the seasonal standards - "We Wish You A Merry Christmas" and "Rudolph the Red-Nosed Reindeer" - gone? Is the school not in the mood for Christmas?

Let's face it - every year, Christmas is being erased from schools and public places. School programs ax out the holiday's songs and replace them with everyday tunes like nursery rhymes. Crèches (also known as nativity scenes) are treated as public seasonal vandalism and thus taken out of the public's eyes. To some, it's a big Christmas-spirit downer. So why is Christmas being censored and banned?

To understand why Christmas is becoming a politically correct matter, take a look back at the early Colonial times. Among the first colonialists by religion were the Puritans, a Christian denomination. They believe in very firm, tight Christian values, and are very strict in celebrating observances. 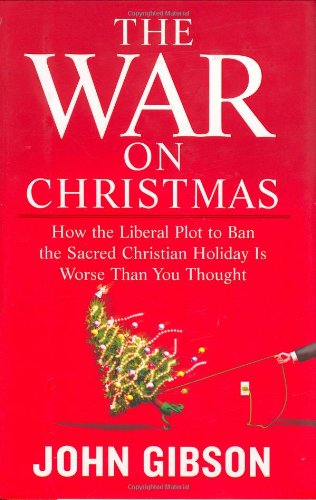 The War on Christmas: How the Liberal Plot to Ban the Sacred Christian Holiday Is Worse Than You Thought
Buy Now

Christmas was no exception to them back then, and they view it as a pagan festival. The holiday involved excessive feasting, dancing, singing joyous songs, and drinking - activities they frowned upon. Also, they believed that Jesus was probably born on a September or October, and that December 25th was just a normal day.

Although Christmas became a federal holiday in America in 1870, the religious offenses against the holiday still remain despite fading as it became more secular. Today, some non-Christian groups want equality in those so-called "winter events," namely Jews (who celebrate Hanukkah), Muslims, atheists (who don't believe in a god or idol), and Jehovah's Witnesses (who have virtually the same views of Christmas being pagan as the old Puritans).

In order to make those events inclusive to those groups as well as Christians, one has to leave out Christmas and create secular approaches and activities. There is an old saying that one bad apple spoils the whole barrel. Thus public places take it to heart by removing holiday references to satisfy those who do not celebrate it.

You Can't Sing (or Play) That - It's Too Christmassy!

Since the times when monks wrote chants, Christmas music delighted everyone who celebrates it. For those who don't because of religious reasons, they are akin (to them) to the profanity-laden songs of today. The words that are to be censored are "Christmas," "Santa," "Jesus Christ," and whatever relates to God or Christmas.

Take the standard, "Silver Bells," for example. In Ottawa, Canada, a school changed the lyrics, replacing the word "Christmas" with "festive." Another elementary school in Wisconsin had their kids sing a song (actually from a play) to the tune of "Silent Night" called, "Cold in the Night." The song angered many who celebrate the religious aspects of Christmas, because they believed that the school secularized the real hymn.

Some schools ban all Christmas songs to make their student body more inclusive. In Australia, a primary school replaced its Christmas carols concert with one with nursery rhymes and cleaned-up versions of pop songs to make a Jehovah's Witness more welcome.

But vocal music is not the only genre of music to be cleared of Christmas and its references (except winter in general). Instrumental music can get the negatively (to most of those who celebrate the holiday) cleansing treatment as well.

One notorious example is the outlaw of all versions of Christmas music in the South-Orange-Maplewood School District in New Jersey. Teachers ordered elementary school children in choruses not to belt out, "Santa Claus is Coming to Town." They told high schoolers in concert bands not to play instrumental "holiday" medleys.

I fear that if schools districts instruct teachers to secularize their "winter concerts," they might as well tell the orchestra or band students not to play arrangements of the sinfonia of Bach's Christmas Oratorio. (To add insult to injury, those who know the choral work say it's all about the birth of Jesus.)

I also fear that if teachers continue to single the Yuletide season out of their school music programs, more music events that have religious music of the season (Epcot's Candlelight Processional is no exception.) would follow suit.

To some retailers and those who serve to the general public (in religious terms), the word Christmas is just as offensive to non-Christians as the N-word is offensive to black people. Retailers instruct employees to use mundane terms, like the more generic "Happy holidays" or "Season's greetings."

Ditto for advertisers, to whom they tell them to tout "holiday trees" instead of "Christmas trees." Even school principals instruct students to use generic greetings, or else they would face disciplinary action for mentioning Christmas. Because of religious aspects, the phrase "Merry Christmas" is like saying God's name in vain.

The main aspect of replacing Christmas with inclusive aspects of the season is deciding which symbols are allowed. In Plano, Texas, the school district instructed children to bring only white party utensils, like plates, cookies, napkins, spoon-forks, and cakes. They also had to wear white. Allegedly, no red or green clothing, food, or supplies were allowed because those colors associated strongly with Christmas. (Ditto for purple and pink, because they are Advent colors.)

In Ashland, Oregon, the school board ordered an elementary school to remove a decorated tree (called a "giving tree" because it includes lists of things wanted by impoverished children) because it is a Christmas symbol, although the holiday was not mentioned. Subsequently, its principal banned all aspects of Christmas as well as Hanukkah, banning Santas, dreidels and the like. Only wreaths, candles, candy canes, snowflakes and snowmen were allowed on display.

In many places, the nativity scenes are to most officials at public places offensive graffiti and thus banned from displays. Unless they understand how bad the majority of people who celebrate Christmas feel, it won't be long until they display only snowmen in generic winter clothing, snowflakes, undressed penguins, and snowy birch trees.

Other places ban all decorations regardless of how Christmassy it is. For example, the Florida's Turnpike Enterprise ordered a moratorium on all decorations in light of complaints from motorists.

Should Christmas Day be treated as just an ordinary day when kids go to school is it offends non-Christians? Probably not, but many public officials treat the holiday as a private, intimate matter, whether those who celebrate it observe the birth of Jesus or merely spend it together with their families.

I approve of the term, "Happy Holidays," but only in conjunction with the mention of the word Christmas. I also believe that balance is key to everything, and public places should balance out the secular and religious. It doesn't matter whether the angel Gabriel or Frosty the Snowman pops up in events and displays. Don't you agree?

My Other Christmas Hubs

Does Christmas Offend You?