How about a cricket, roasted to perfection then covered in creamy milk chocolate? Or a dried cluster of ants coated with dark chocolate? Or -- ooh! -- what about a fried grub nestled in a thick layer of white chocolate? I know, your mouth is watering.

Yes, there really is a National Day of Chocolate-Covered Insects. So, mark your calendars for October 14th and stock up on your favorite chocolate-covered bugs and invite all your friends to commemorate the occasion and partake in the deliciousness.

Here, I'll share with you some information about eating insects, recipes for making your own chocolate-covered delights for the special occasion on October 14th (or any time you're inspired) and how to prepare said bugs for cooking. There are also some ready-made chocolate-covered insect confections you can purchase, videos, photos and, for those who want to celebrate National Chocolate-Covered Insect Day but without that inner crunch, some alternative confections that are still in the spirit of the holiday.

A Visitor Poll: Have You Ever Eaten a Bug?

Or, perhaps I ask, are you an entomophagian? (Yep, that's the fancy word for "one who eats bugs.")

Which of these statements best describes you and your insect-eating experience?

Chocolate Covered Insects: 24 CT
Get your protein here! Who needs hamburger or chicken? Get your daily dose of protein with this assortment of insects, covered in milk and white chocolate. Stock up for the big day -- October 14th -- but pick up an extra package to snack on in the meantime.
Buy Now

The Short Story of Eating Bugs

Once upon a time in a cave far, far away, a long-haired, long-bearded early human watched a bear eating bugs. "Hmm," he said aloud to no one (but not exactly in these words; it was more of a grunt), "I wonder if those insects taste good. Perhaps I should try some, myself." And he did. And, by george, they were good!

In turn, that caveman shared the insects he collected with others, and their palates were happy and their bellies full of bugs. Many years later, this culinary practice was likewise enjoyed by the Greeks and Romans, who dined on locusts and beetle larvae. Even Aristotle wrote about collecting tasty cicadas. (Source: History of Eating Insects)

And somewhere along the line many years later, a big, juicy insect fell into someone's melting chocolate, and she (I'm sure it was a woman) discovered something new and delicious, which she immediately replicated and shared with the masses in her new cookbook.

Perhaps, to you, the idea of eating an arthropod, even if it's well hidden in rich, creamy chocolate candy coating, actually makes you gag. In some countries, though, like China and Thailand, chocolate-covered insects are considered a delicacy. In fact, even without the chocolate coating, millions of people around the world eat insects as part of their daily diet.

In Southern Africa, for example, caterpillars are an important source of protein for the indigenous people, as well as a good source of calcium and iron too. Globular Huhu grubs are a traditional Maori food in New Zealand, and in a town north of Phnom Phen in Cambodia, tarantulas are often eaten by the locals. Popular bugs for the eating also include ants, spiders, lice, termites, beetles, crickets and bees. There's even a link below to a recipe for chocolate-covered scorpions and a photo of a tray of these crunchy and sweet delights for sale in a California candy shop. (See a slideshow of edible insects.)

For more examples of specific bugs eaten around the world -- where and how they're prepared-- and some interesting recipes you MIGHT (or might not) want to try, see Weird Foods from Around the World.

Video: An Overview of Different Types of Chocolate-Covered Insects by a Conoisseure - An interview on National Insects Day

The reactions by the interviewer -- a rather reluctant taster -- are quite funny.

And if you've ever wondered, do vegetarians eat insects? That question is addressed in this video as well.

But any day is the perfect day for one of these unique and delicious treats!

WOULD You, Could You, Might You Eat a Chocolate-Covered Insect?

If, say, you'd be given a nice chunk of change for the eating. Or maybe just to do as the natives do while traveling? Or simply to be a little adventurous?

Make Your Own Chocolate Covered Grasshoppers

Prep Time: Oh, maybe 20 minutes, give or take an hour

Total Time: Depends how long it takes you to collect the grasshoppers

Serves: 1 to 25 depending on how many you each want

Cast your vote for Make Your Own Chocolate-Covered Grasshoppers

She gives some very important tips as well. One thing, though, that she doesn't mention is to avoid using red ants, unless you really want to spice up the dish. They're hot! 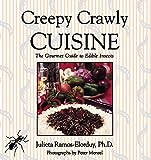 Before you fire up the oven....

Read about How to Prepare Insects for Cooking

Photo was taken in South Africa

These dried stink bugs are ALMOST ready for chocolate-dipping. Just a few body parts need to be removed first.

Want to Celebrate National Chocolate-Covered Insects Day Without the Actual Insects? - Here are some alternatives....

CK Products 2-1/2-Inch 3-D Worm and Bugs Chocolate Mold by CK Products
Melt the chocolate of your choice -- milk, semi-sweet, dark or white -- and pour into these worm- and bug-shaped molds. It looks like the real thing (sorta) but without that inner crispy crunch.
Buy Now

Chocolate-Covered Ants
Second-grader, Adam, is thrilled to get an colony for his birthday ... but it doesn't come with the ants. As he waits impatiently for the tiny colonists to arrive, he heads to the library to learn about the little buggers. When the ants do finally arrive, Adam's older brother, Max, tells his skeptical sibling that people really do eat chocolate-covered ants. If Max can prove to Adam that he's right, he'll win a bet with his brother. But, alas, disaster awaits! (Suspenseful, huh?)
Buy Now

Think THIS is a Strange Holiday?

Check out lots of other