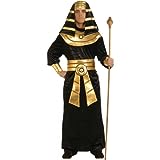 Dressing up like a Pharaoh of old can be a lot of fun, and because of the somewhat exotic nature of that period of time, or at least those who imagine that time to be, there are a lot of cool Pharaoh costumes and accessories to choose from.

One thing I found when looking through a number of options, was some of those Pharaoh costumes that were homemade were done very well, and stood out in some cases, beyond those that were "professionally" made.

Either way, all of them look very cool and capture some of the reality of what that period of time was like.

But let's face it, there's one major reason people like to dress as Pharaoh, other than looking cool, and that is to feel that sense of power that a Pharaoh would instill in the people.

Even in a costume, that sense of authority seems to spring out of what it represents. And it's fun to see how people respond to it.

Speaking of displaying a sense of power, this Pharaoh costume made up mostly of gold definitely has that going for it. The head piece looks great. One thing different about this costume and the others in this article, is this one, for whatever reason, includes a shorter robe than others.

That doesn't really matter, as it still looks awesome, as does the dark blue and gold color combination.

Just to show you a Pharaoh costume not only comes in all shapes in sizes, but can look good to, I included this plus-size Pharaoh outfit as an example. It looks good. And when you consider these guys also had their share of food to feast on in those days, it's probably not that far from reality; at least for some of the Egyptian leaders.

This Pharaoh costume was added so you could see exactly how important it is to have a head piece for him. No matter how you cut it, this just doesn't look like Pharaoh, no matter how nice looking the actual costume is. You have to have that head piece to make it work, as you can see here.

Having said that, the costume itself looks fantastic, with the white being a stunning canvass for the complementary blue and gold.

I wasn't sure at first why the Pharaoh costume below was my favorite of the bunch shown. Then I realized it included my favorite colors of dark blue and yellow, which for me, really work well together. Also that head piece is by far, in my opinion, the coolest and most interesting of them all.

Finally, here was a very unique Pharaoh costume, presumably homemade. The head piece looks great, and of course the gold always works in relationship to royalty. It definitely gives you that majestic look.

Well, there you have a quick look at the variety that making a choice to wear a Pharaoh costume on Halloween or cosplay offers. There are also a lot of accessories to go with Pharaoh, which makes it all the more fun to investigate.